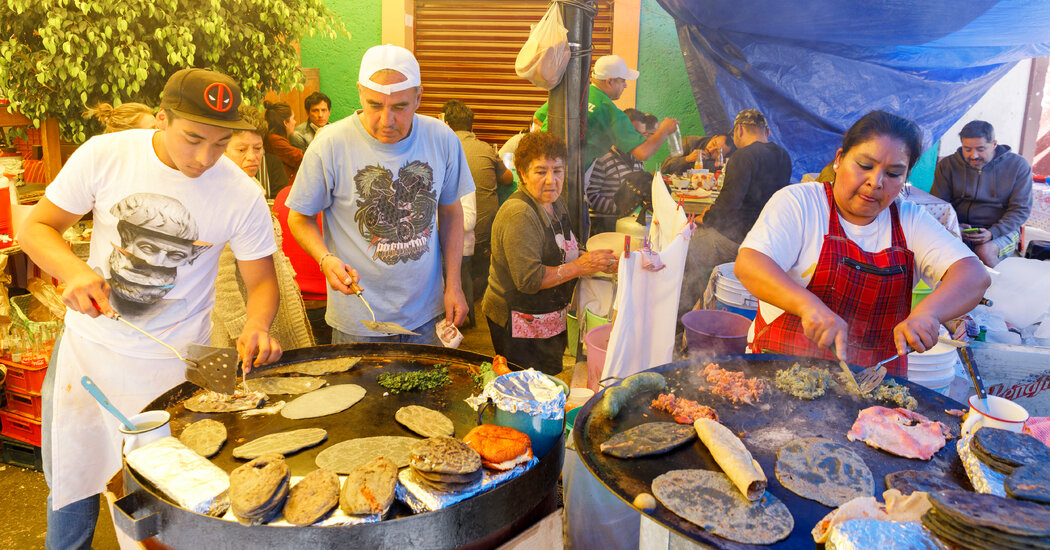 Tacos Los Juanes used to be crowded and vibrant every night from 7 p.m. to 4 a.m. or so. The clientele was always a curious mix: office workers, gymgoers, tourists, party makers.

But now when we walked by, it had only a couple of patrons, masked and silently waiting.

“Why don’t you ask for their phone number?” my wife said. A few days later I called and ordered tacos al pastor and flank steak with cheese in a flour tortilla.

When the food arrived, the smell felt so weird and satisfying. I hadn’t had those tacos in a year, and there they were, sitting on my countertop, street tacos — and their salsas — delivered right to my pandemic kitchen.

We ate them eagerly. They were delicious, of course. A flavorful remembrance of times past. But at the same time, they were a painful reminder of the world we don’t live in anymore. A world where you could stop by a taco stand late at night to have four tacos al pastor, adding salsas to your disposable plate, surrounded by strangers without thinking about getting a deadly disease. A world where you could eat dinner and have a bottle of wine — or two or three — in a restaurant sitting at a table full of friends instead of in front of a computer screen, wearing pajama pants.

That’s when it hit me. Los Juanes’ tacos were great, but great tacos, like a great steak with morels and pasta al limone, lack flavor if they are not the side dish of a great chat or a moment shared with family and friends.

The other day my wife and I ran into a chef friend we hadn’t seen in a year, in front of his popular seafood restaurant. He knew I was sick before the pandemic, that my quarantine had been longer than most. He’d had Covid twice — or that’s what he said.

He tried to hug me. It felt deeply painful to reject him. “Not yet, carnal,” I said. Then he asked when I had last eaten at a restaurant. My wife and I looked at each other. “March,” I said timidly. He couldn’t believe it. “Let’s do this,” he said. “I will close the private room for both of you tomorrow.” I told him I’d think about it.

Hong Kong Security Law Sends a Chill Over the City

Uber, After Buying Postmates, Lays Off More Than 180 Employees