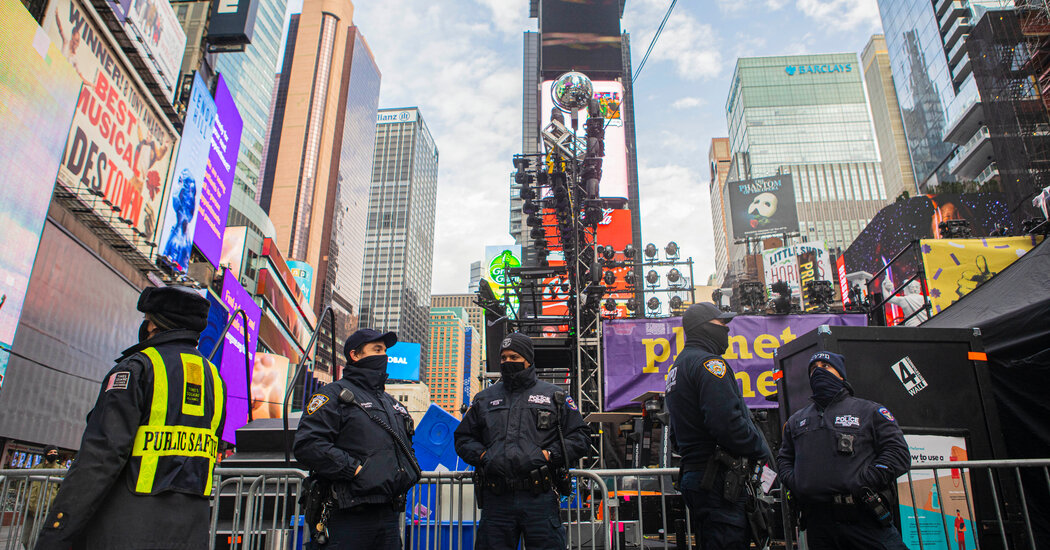 This year, for the first time in decades, Times Square will be closed to the public on New Year’s Eve. Only production workers and dozens of selected frontline workers and their families will be permitted near the stage.

On Wednesday, New York City police officials urged the public to stay home. “There are absolutely no spectators allowed in Times Square,” Chief Terence A. Monahan, the top uniformed member, said at a news conference.

“Don’t even attempt to come down there and watch it,” he added.

As it does every year, the city will close streets in the area, and police officers will operate checkpoints to prevent access. But instead of letting in visitors in drips, all uninvited guests will be turned away, with pedestrians limited starting at 3 p.m. on Thursday.

“Anyone that starts to gather, they’re going to be told to move along,” Chief Monahan said.

Two blocks around Times Square will be used for this year’s celebration, a much smaller footprint than usual. Eight-by-eight-foot pens will be spaced on the streets, serving as viewing areas for about 40 workers who have kept the city and the country running safely and smoothly, and who have been invited to bring their families along to celebrate.

For those at home, the TV networks will project the image of a Times Square transformed by the pandemic, one without the throngs of revelers in glittering gear who wait in the cold for hours to take part in a national spectacle. “Dick Clark’s New Year’s Rockin’ Eve with Ryan Seacrest” will still rock on ABC. In a year without party banter, Anderson Cooper and Andy Cohen will again offer their New Year’s Eve buddy comedy act on CNN.

NEP 2020 will be a milestone in the history of our country, says President...