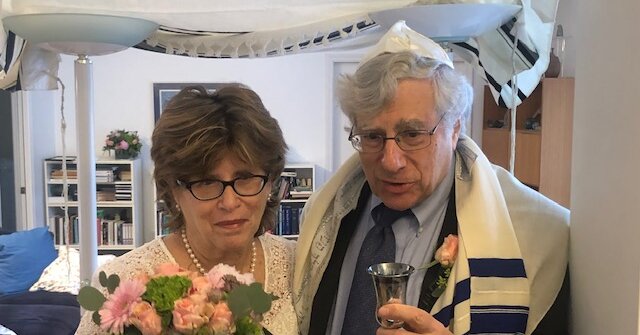 Elizabeth M. Schneider always had a soft spot for Yalies — her father and son went there — and she could belt out Bulldog football team fight songs and the “Bright College Years” unofficial alma mater with the best of them.

“I was thinking what would happen as my wife got worse,” said Dr. Liptzin, a retired geriatric psychiatrist who was the chair of psychiatry at Baystate Medical Center in Springfield, Mass., and professor of psychiatry, now emeritus, at Tufts University School of Medicine. He received a medical degree from the University of Rochester. “I anticipated I didn’t want to spend the rest of my life alone.”

In May 2018, his wife, who had shown symptoms of the disease since 2011, moved into the memory unit at an assisted-living facility in Lenox, Mass. It was then that he reached out to Professor Schneider, explaining the situation.

“Liz had said she was looking for a long-term relationship,” said Dr. Liptzin, who has three children, also Yale alumni, and six grandchildren. “I didn’t know if I could commit. I was a married man.”

“His response was so thoughtful and so kind,” she said. “I could completely relate. I was an only child who helped support my father because my mother had Alzheimer’s for 14 years. I could understand how devastating that was.”

A few days later they met for tea at a Midtown Manhattan coffee shop when Dr. Liptzin drove in to have dinner with friends.

“Never in my life did I imagine until I met Ben, I could meet someone I had so much in common with,” said Professor Schneider, who lived in Greenwich Village. She teaches civil procedure as well as gender and law at Brooklyn Law School. She received a master’s degree in political sociology from the London School of Economics and a law degree from N.Y.U.

“Both of us had been pioneers in our fields of work and got tremendous pleasure in mentoring people,” she said, and she also considered him “handsome, smart, warm and funny.” She loved that he lived in the Berkshires where she had gone to camp and she had a house in nearby upstate New York during her previous marriage, which ended in divorce in 1986. She has two children.

Dr. Liptzin likes to say they were “simpatico,” and July 4 weekend she joined him for the James Taylor opening concert at Tanglewood, where they danced by their seats and sang along.

“I thought she was a very attractive, lively, interesting and accomplished woman,” he said. In August she helped him host his annual Yale alumni brunch and Tanglewood gathering.

“We tried to be very sensitive,” Professor Schneider said. “I knew from my own experience that Ben’s children were grieving their mother’s decline.” She died in October 2019.

In December, Professor Schneider joined Dr. Liptzin and his family on their annual holiday trip, this time to Captiva Island, Fla. He helped her sell her house in Greenwich Village and buy a co-op, and in March, when the pandemic set in, she began teaching remotely from his place.

They were married Dec. 20 via Zoom by Rabbi Liz P.G. Hirsch under a huppah at Dr. Liptzin’s house in Stockbridge, Mass., while about 300 friends and family from around the world livestreamed the two-hour celebration, which was hosted by her son in Singapore and his son in Denver.

A Republican Lawmaker for Whom the Spectacle Is the Point