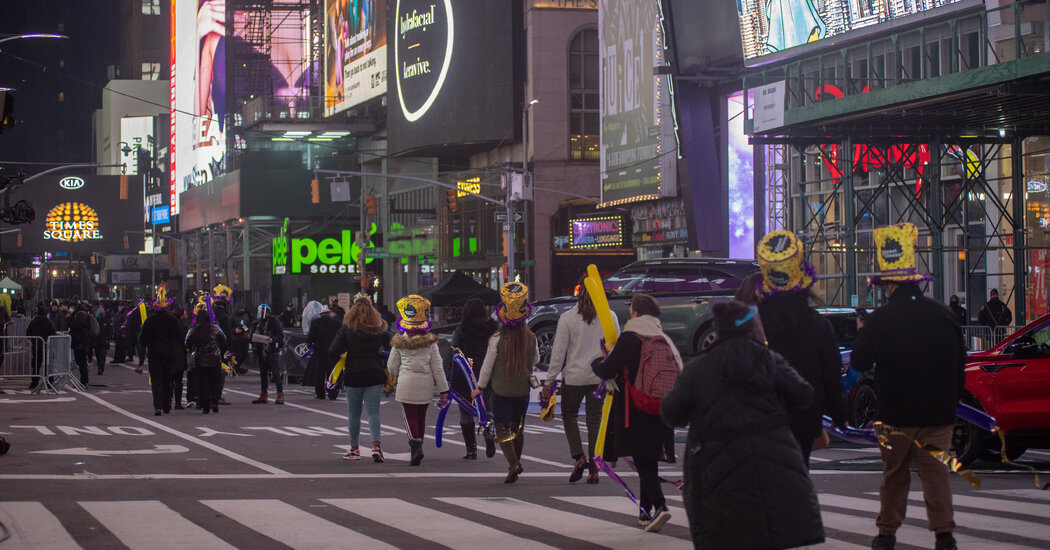 The atmosphere in Times Square was unrecognizable three hours before New York City ended one of its most challenging years in history.

With the area sealed off to the public, artists like Gloria Gaynor and Machine Gun Kelly performed to crowds of dozens. Yellow inflatable tube dancers set up along sidewalks rivaled the number of guests. And where hundreds of thousands once would have clustered shoulder-to-shoulder, police officers paced through unfettered by crowds.

In the lead-up to the evening, officials warned New Yorkers and tourists that all uninvited guests would be turned away. Would-be visitors seemed, for the most part, to hear the message, and an eerie stillness across Duffy Square was filled only by electrical hums and the distant murmurs of conversations.

Rafael Mann of Hell’s Kitchen was on a nearby street walking alone to pick up an order for his family and return to his apartment. Though the muted festivities were slightly disappointing, Mr. Mann said, he had no desire for a large celebration this time.

Earlier in the day, most people wandering the area appeared content to squeeze in last looks, and selfies, as preparations continued for a pared-back celebration amid a comparatively barren streetscape.

“You don’t normally get to see Times Square empty,” Allysa Hassid of Manhattan said after pausing for a picture with her 2-year-old daughter, Jolene. Ms. Hassid knew she could not watch the ball drop from where she was standing, but she was not letting that spoil her mood.

“We’re going to be home the rest of the night,” she said, “so this feels really festive.”

“Festive in a weird way,” she added.

There was a similar sense in Williamsburg and Greenpoint in Brooklyn as midnight approached.

At Five Leaves on Bedford Avenue, Gabe Stuart and two friends sipped hot buttered rum from cardboard cups, enjoying the sidewalk seating after finding nearby McCarren Park, where they had planned to share a bottle of wine, empty.

“The idea was to stay outside, and eventually go to sleep pretty early,” Mr. Stuart said with a laugh. He described spending last New Year’s Eve with the same friends, smoking cigars at a lavish party in Greenpoint. “It was over the top. New Year’s Eve in New York can be hit or miss, so this year expectations are pretty low. But it’s pretty weird.”

Amanda Browder and two friends who had been apartment hunting were among those enjoying free shots at the Grand Republic cocktail club in Greenpoint, which offered them hourly until 10 p.m., when state regulations required it to close.

“That was our little celebration, right there,” Ms. Browder said after she finished her shot and a piece of chocolate cake was delivered to her table. After finishing the cocktail she had ordered, Ms. Browder was still pondering a late-night bike ride across the Williamsburg Bridge. She planned to sleep late on Friday.

Two lawmakers test positive after being in lockdown at the Capitol.