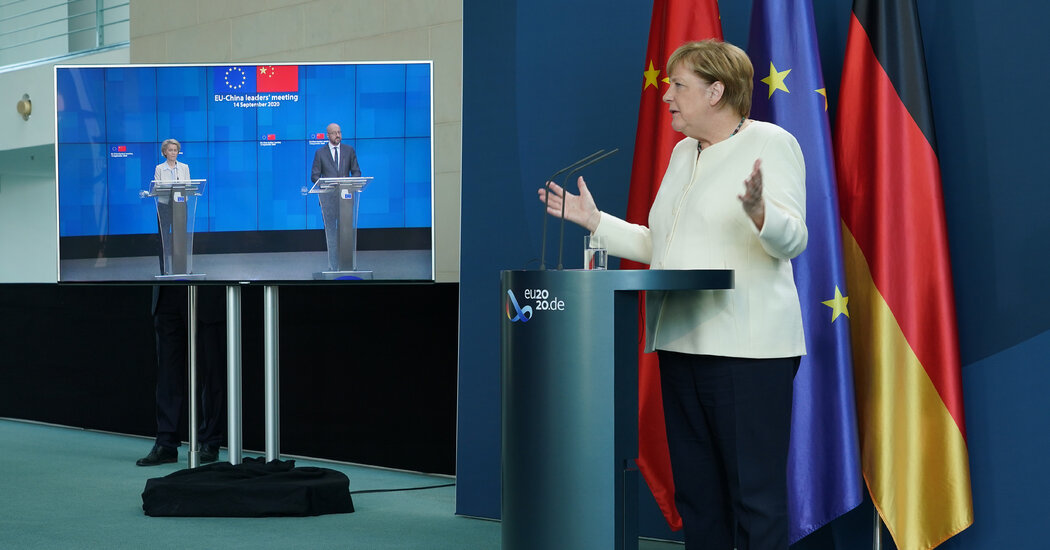 Chinese and European Union leaders agreed on Wednesday to make it easier for companies to operate on each other’s territory, a significant geopolitical victory for China when criticism of its human rights record and handling of the pandemic have left it increasingly isolated.

But political opposition in Europe and Washington could ultimately derail the landmark pact, illustrating the difficulties of dealing with an authoritarian superpower that is both an economic rival and a lucrative market.

A large faction in the European Parliament, which must ratify the agreement before it can take effect, opposes the accord on the grounds that it does not do enough to stop human rights abuses in China. In addition, a top aide to President-elect Joseph R. Biden Jr. has signaled that the incoming administration is not happy with the deal.

Chancellor Angela Merkel of Germany has made the agreement a priority because of its importance to German carmakers and other manufacturers with large operations in China. This year, China edged out the United States as the European Union’s largest trading partner, with 480 billion euros, or $590 billion, in two-way trade through October.

The pact would loosen many of the restrictions imposed on European companies working in China, including a requirement that they operate through joint ventures with Chinese partners and share sensitive technology.

The agreement would also open up China to European banks and contains provisions intended to curtail secret government subsidies. Foreign companies often complain that the Chinese government secretly subsidizes domestic firms to give them a competitive advantage.

The agreement will “significantly improve the competitive environment for European companies in China,” Hildegard Müller, the president of the German Association of the Auto Industry, said in a statement before the announcement. “It will provide new impetus for a global, rules-based framework for trade and investment.”

China’s leader, Xi Jinping, also made reaching the agreement a priority, authorizing negotiators to make enough concessions to persuade the Europeans to move ahead.

European officials said a breakthrough came in mid-December when China, in a significant concession, agreed to make a stronger commitment to observe international standards on forced labor. China also agreed to step up its efforts to fight climate change.

Ursula von der Leyen, the European Commission president, said the agreement would provide “unprecedented access to the Chinese market for European investors, enabling our businesses to grow and created jobs.”

“It will also commit China to ambitious principles on sustainability, transparency and nondiscrimination,” she said in a statement.

Concluding the pact now is a diplomatic victory for China, which has seen its international standing battered over its handling of the coronavirus pandemic, its crackdowns in Hong Kong, and the forced labor and mass internment of Uighurs and other Muslims in the far western region of Xinjiang.

Those issues — and wariness of Chinese pledges truly to open up to foreign investment — became the focus of opposition to the agreement as the final details were ironed out. For the Chinese, the deal demonstrated that the country does not face significant diplomatic isolation over its handling of human rights.

But the agreement could be a tough sell in Europe.

“Public opinion was very disillusioned with the Chinese regime,” because of Hong Kong and the pandemic, said Philippe Le Corre, a research fellow at the Harvard Kennedy School who tracks Chinese investment in Europe. “And now we have this deal, which is mainly designed to please a handful of German multinational companies.”

The opponents may be able to muster enough votes to block ratification in the European Parliament.

Reinhard Bütikofer, a leader of the German Green party and chair of the European Parliament’s delegation for relations with China, said the agreement should include a stronger guarantee against the use of forced labor.

“I think the European Parliament will fight very hard for its point of view on that issue and several others,” he told Deutschlandfunk radio Wednesday.

China appeared eager to reach an agreement before Mr. Biden takes office in January, calculating that closer economic ties with the Europeans could forestall efforts by the new administration to come up with an allied strategy for challenging China’s trade practices and other policies.

Mr. Biden, in a speech on Monday, said that on any issue that mattered to the U.S.-China relationship, the United States was “stronger and more effective when we are flanked by nations that share our vision for the future of the world.”

Currently, he said, there is “an enormous vacuum” in American leadership. “We’re going to have to regain the trust and confidence of a world that has begun to find ways to work around us or without us.”

The White House also opposed the agreement, but had little leverage among the Europeans to block it. The Trump administration has tried for months to isolate China and its companies — announcing new restrictions on those tied to the People’s Liberation Army this week — only to be repudiated by countries still willing to engage the Chinese.

The Europeans’ decision to overlook objections from the Biden camp was an indication that relations with the United States will not automatically snap back to the relative bonhomie that prevailed during the Obama administration.

President Trump’s penchant for burning bridges with longtime allies inspired Europe to largely ignore the United States as it pursued trade agreements with countries like Japan, Vietnam and Australia. European diplomats said this week that while they hoped for a more cooperative relationship with the Biden administration, they could not subordinate their interests to the U.S. election cycle.

Negotiators for China and the European Union had been working on a deal for almost seven years, but progress accelerated suddenly after Mr. Biden defeated Mr. Trump in the election.

Unlike Mr. Trump, who has often been hostile to Europe, Mr. Biden is expected to try to cooperate with the European Union to rein in Chinese ambitions, but those efforts could take many months to materialize.

United States law prohibits members of the incoming administration from negotiating directly with foreign officials until Mr. Biden is sworn into office on Jan. 20. In an interview at the beginning of December, he said he planned to conduct a full review of the trading relationship with China and consult with allies in Asia and Europe to develop a coherent strategy before making changes to America’s terms of trade.

“I’m not going to make any immediate moves,” he said.

In the interim, Mr. Biden’s advisers have used public statements to caution European officials against any hasty action, and to try to persuade them of the benefits of waiting to coordinate with the new American administration.

Mr. Biden’s choice as national security adviser, Jake Sullivan, wrote on Twitter this month that the new administration “would welcome early consultations with our European partners on our common concerns about China’s economic practices.”

Chinese officials pressed to keep the deal on track in recent weeks, especially after opposition in Europe spilled into public.

As the talks hit a snag last week, China’s Ministry of Commerce said in a statement that the agreement would have “great significance for the recovery of the global economy.” It said that both sides had to be willing to “meet halfway,” but that China would protect “own security and development interests.”

Despite the agreement’s provisions on forced labor, Chinese officials have repeatedly denied that the country engages in the practice — in Xinjiang or elsewhere — despite evidence to the contrary. The vehemence of those denials raises questions about how China could be expected to honor commitments to protect workers’ rights.

“The so-called forced labor in Xinjiang is a complete lie,” a spokesman for the Foreign Ministry, Wang Wenbin, said recently. “Those responsible for such despicable slandering should be condemned and held accountable.”

The European Chamber of Commerce in China welcomed the agreement, though with a note of caution, saying it could still face hurdles before the two countries ratify it. “A strong agreement would be a powerful statement to show that constructive engagement can produce results,” the chamber’s president, Jörg Wuttke, said in a statement.

The Coronavirus Is Mutating, and That’s Fine (So Far)