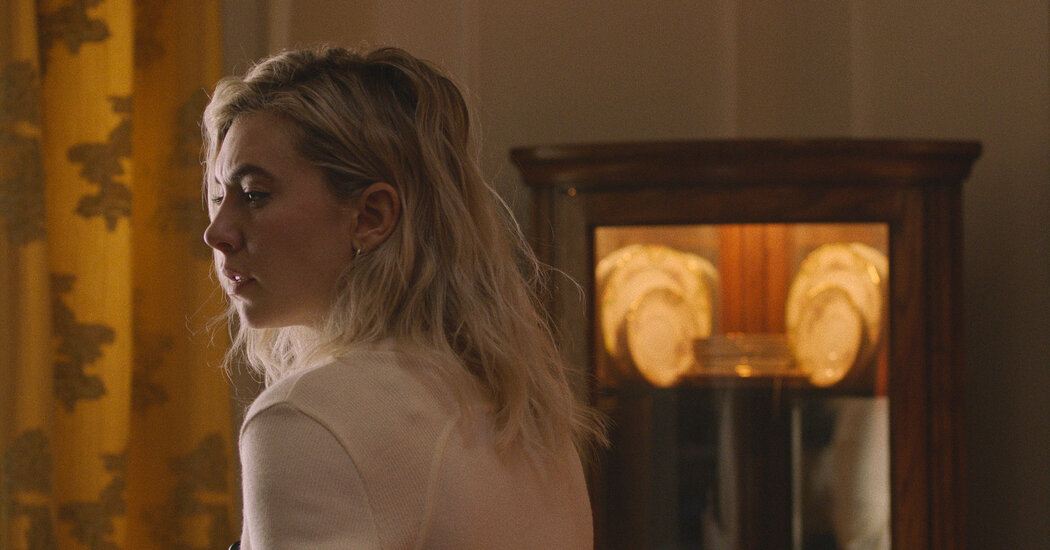 There are two remarkable scenes in “Pieces of a Woman,” though the first — an almost 30-minute, largely unbroken opening shot of a home birth — seems set to divert critical attention from the second.

That scene, arriving about halfway through the movie, feels at least as radical and courageous as its precedent. In it, we see the central couple, Martha and Sean (Vanessa Kirby and Shia LaBeouf), try to have sex. Both are grieving the death of their child; but while Martha has turned inward, Sean is reaching out with visible aggression.

The tussle teeters on the verge of force; what deflects that impression is our knowledge of the couple’s closeness (beautifully established in the opening scene) and Kirby’s intensely physical performance. Using chiefly body language, she conveys Martha’s desperate need to match her husband’s desire, to feel something other than emptiness. It would be regrettable, therefore, if the current allegations of abuse against LaBeouf were to distract from her skill.

Piercing an intimate, natural tone with almost soapy slivers of melodrama, “Pieces of a Woman” comes close to wringing you out. The English-language debut of the Hungarian director Kornel Mundruczo (best known for his jaw-dropping 2015 drama, “White God”), the movie doesn’t always gel: The couple’s pursuit of legal action against their seemingly blameless midwife (Molly Parker) feels at odds with the movie’s dense emotionalism. Yet when everything clicks, the screenplay (by the director’s wife, Kata Weber, drawing on memories of a similar experience) lucidly shows how an unimaginable loss can spark a cascade of atrophy.

As Sean, a construction worker in longtime recovery, LaBeouf lends a touching loneliness to a character who, driven by his wife’s withdrawal, seeks connection and sensation elsewhere. Differences of class and upbringing rear into view, invigorated by Martha’s wealthy mother (a magnificent Ellen Burstyn), a steel-spined Holocaust survivor. Family quarrels buzz around decisions that, in the wake of a devastating bereavement, mean nothing and everything: The disposition of the infant’s remains, the spelling of her chosen name.

Other voices, though, are just white noise to Martha, who takes to the chilly Boston streets, alone save for Benjamin Loeb’s gliding, compassionate camera. In a grocery store, she inhales the scent of an apple, later wrapping its tiny seeds in damp cotton and laying them tenderly in the refrigerator. It’s a while before we learn why; yet Kirby (wonderful as the young Princess Margaret in the Netflix series “The Crown”) makes us feel Martha’s agony so keenly that details scarcely matter. The film’s focus on the physical — the way her body continues to leak postpartum fluids; how she flinches when friends move to touch her — is so relentless that it becomes the narrative.

Set over eight harrowing months, “Pieces of a Woman” is a ragged, mesmerizing study of rupture and reconstruction. The ending is ill-judged, but the movie understands that while we love in common, we grieve alone.

Pieces of a Woman
Rated R for tastefully explicit birthing. Running time: 2 hours 6 minutes. In theaters. Watch on Netflix starting Jan. 7. Please consult the guidelines outlined by the Centers for Disease Control and Prevention before watching movies inside theaters.

Analysis: What the Latest Polls Show

Bihar extends lockdown due to coronavirus till September 6