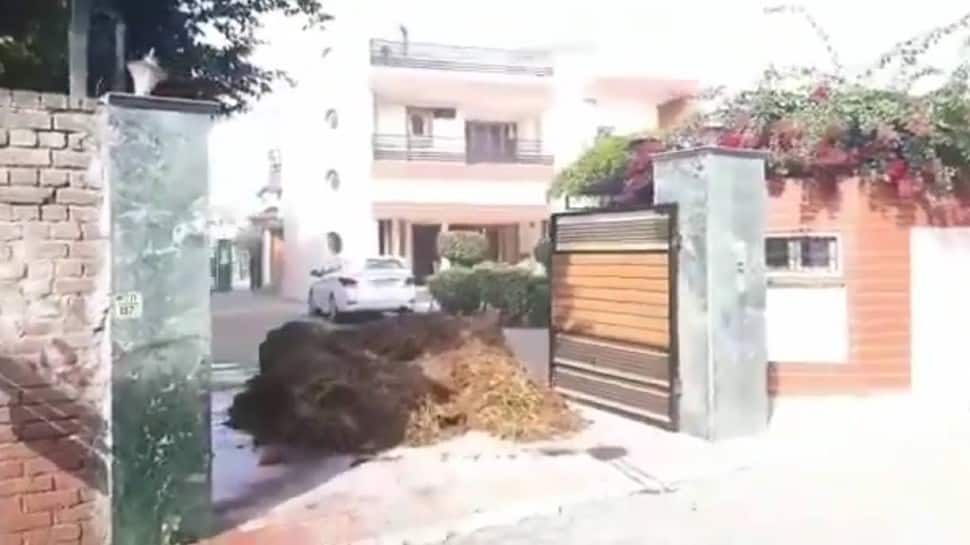 New Delhi: A group of people unloaded a dung-laden trolley in front of a Punjab BJP leader’s house in Hoshirpur on Friday, prompting Chief Minister Amarinder Singh to warn those protesting over the new farm laws not to take law in their hands.

Some people, believed to be farmers, unloaded the trolley in front of the residence of former Punjab minister Tikshan Sud in Hoshiarpur.

They also raised slogans against the Centre for its alleged callous attitude towards farmers’ demands.

Annoyed by the act, BJP workers led by Tikshan Sud staged a dharna on the Rai Bahadur Jodhamal road in Hoshiarpur, seeking action against those responsible for it.

He said some mischievous persons under the garb of farmers ?attacked? the residence of Sud, only to disturb peace and brotherhood in the state.

Punjab CM Amarinder Singh too took a serious note of the incident and said invasion of privacy will bring a bad name to the peaceful agitation of farmers and defeat its very objective.

He warned protesters not to take law in their hands in their fight for the farmers’ rights.

After months of showing exemplary restraint and not indulging in any violence or lawlessness in Punjab as well as at the borders of the national capital, some protesters are losing restraint despite being categorically asked by farmer leaders to keep the protests peaceful, said the CM in a statement.

He urged the protesters to exercise restraint and express solidarity with farmers in the same spirit of self-discipline as has been demonstrated so far by farmer organisations.

The chief minister said such acts have the potential of vitiating the atmosphere of peace and destroying harmony amongst people of diverse castes, religions and communities.

Traumatisation of families of political leaders or workers through such acts may lead to a law and order problem in Punjab, he said.

A large number of farmers are protesting at the borders of Delhi for over a month, seeking repeal of three new agriculture laws.

Coronavirus Spares Gaza, but Travel Restrictions Do Not

Can a Latina Girl Dream of Being President of the United States?