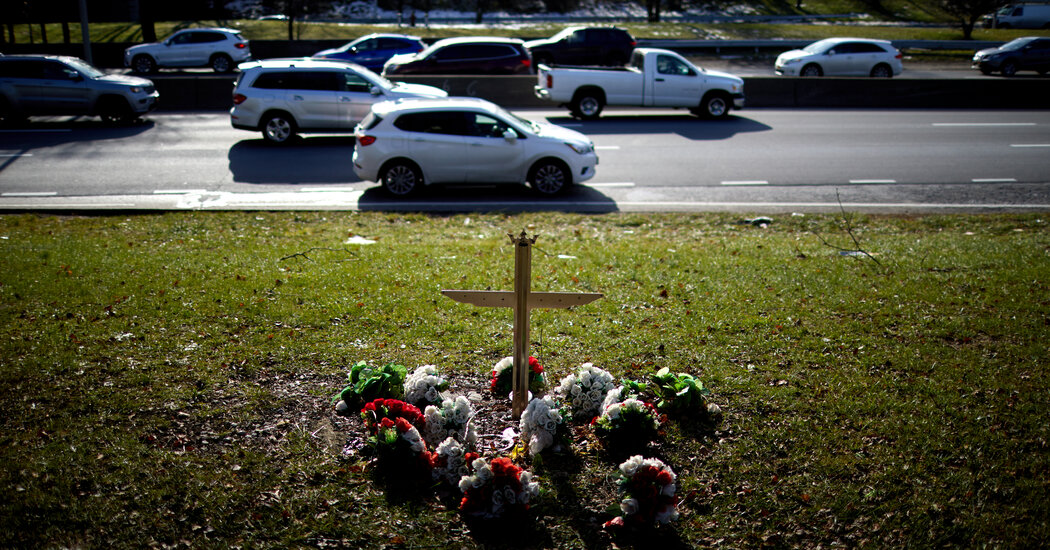 When the pandemic hit New York City, cars seemed to disappear from many streets as the lockdown brought urban life to a halt and drivers stayed home.

Today, traffic is still lighter than usual at times. But in a troubling trend echoed across the country, the number of deadly car crashes has soared.

At least 243 people died in traffic crashes in New York City in 2020 — making it the deadliest year on record since Mayor Bill de Blasio introduced his signature plan to improve street safety in 2014.

The spike in traffic deaths defied historical trends: Economic downturns and reduced congestion typically lead to fewer fatal crashes, federal researchers say. But during the pandemic, it seemed that drivers who felt cooped up in their homes flocked to wide open streets.

People sped recklessly down vacant highways. Riders who had not been on a motorcycle in years — or ever — took to roadways. In big cities, late-night drag racing became more popular as other entertainment vanished.

Deaths of drivers, passengers and motorcyclists rose sharply in 2020, to 120, from 68 in 2019 — an increase of 76 percent and the highest level in over a decade, according to city data.

Those figures do not include deaths of pedestrians, which dropped, and of bicyclists, which remained about the same.

The overall spike in fatalities is a blow to Mr. de Blasio’s Vision Zero program, which aimed to eliminate all traffic deaths by 2024, and a challenge for the coming months, when traffic patterns are unlikely to return to normal.

“We always knew that Vision Zero would not be linear, we would have some years when fatalities rose and we would have some better years,” Margaret Forgione, the city’s acting transportation commissioner, said in an interview. “But this year threw everything into disarray.”

She added, “It’s not a year reflection of what’s typically been happening in our city.”

New York was not an outlier. Across the country, fatality rates for traffic crashes increased for the first time in years, according to the National Highway Traffic Safety Administration, a federal agency. Between April and June, the fatality rate rose to around 30 percent higher than the first three months of the year, federal researchers found.

The spike can be explained, in no small part, by the coronavirus crisis.

Older people, who tend to be more cautious drivers, stayed home. Without their usual diversions, younger drivers — who are more prone to risk-taking — hit the road. And increased alcohol and drug use to cope with pandemic-related stress factored into many crashes, the federal agency said.

In the spring, tickets for speeding over 100 miles per hour surged 87 percent in California during the first month of a statewide lockdown. New York City’s automated cameras issued nearly twice as many speeding tickets daily, and rush-hour traffic speeds in Brooklyn and Queens shot up more than 80 percent. State troopers in Georgia cited 140 drivers for speeds over 100 m.p.h. in a two-week period in April.

“There were places that saw more speeding tickets issued during Covid than ever before,” said Richard Retting, a traffic safety expert with Sam Schwartz Engineering, a traffic and transportation planning firm. “Bottom line is, the risk on the road during the Covid era is significantly higher. The chance of dying in a car crash is higher than pre-Covid.”

In New York, officials said most fatal crashes in the city last year involved drivers cruising at high speeds, often late at night and on highways outside Manhattan.

Motorcyclist fatalities also reached their highest level in over 30 years, and about 60 percent of them involved riders who did not have a valid motorcycle license, according to city data.

The number of crashes in which only the rider was killed or injured was also up, suggesting that more inexperienced motorcyclists were riding at high speeds, city officials said.

“We saw a lot of younger people, young men in particular, seem to be seeking an outlet from the stress and the boredom of Covid and getting on motorcycles when they had no business doing so,” Ms. Forgione said.

The result of all these trends was a string of particularly horrific crashes: One Saturday evening in July, a group of teenagers were gathered at a decommissioned airfield in southeast Brooklyn to watch as two of them “did doughnuts,” or spun their cars in loops at high speeds. The cars collided, killing an 11-year-old boy and two teenagers.

Over two days in August, three motorcyclists — including two men in their 20s — were killed in three separate crashes. And last month in Yonkers, just outside New York City, four recent high school graduates were killed when a speeding driver hit their car, tearing it in half.

To crack down on speeding, city officials in September reduced speed limits by five m.p.h. on nine of the most dangerous roads across the five boroughs.

Mr. de Blasio also called on the State Legislature this month to allow the city’s speed camera program — which limits cameras to operating only in school zones and at certain times of day — to operate round-the-clock.

The city has more than 1,300 automated cameras, spread across 750 school zones, that operate between 6 a.m. and 10 p.m. Around 30 percent of fatal crashes that happened off highways in 2020 occurred in zones when cameras were not active, according to city data.

The Police Department has also deployed its vehicles to the places — like multilane roads in Brooklyn, Queens and the Bronx — where the bulk of fatal crashes have occurred and where state law does not allow speed cameras.

“Quite frankly, drivers took advantage of the open roads and sped with their vehicles,” said Kim Royster, the Police Department’s transportation chief. “Visibility is very important when it comes to traffic enforcement, especially for speeding and drag-racing drivers.”

Chief Royster noted that police had issued fewer overall traffic summonses, including arrests for driving while intoxicated or driving without a license, compared to 2019 because of staff shortages last spring and summer, when officers fell sick or were deployed for protests against police brutality.

But the police issued about 140,000 speeding summonses between November 2019 and November 2020 — only 7 percent less than in the same period the prior year, according to police data.

In a bright spot, pedestrian deaths reached a record low last year as fewer people walked the streets in places like Midtown Manhattan. City streets had their longest stretch without a pedestrian fatality — 58 days — since officials began tracking those deaths in 1983.

And despite a surge in cycling, fatalities among bicyclists were about the same as last year, which city officials attributed to reduced traffic, the effect of safety in numbers and the record 28.6 miles of protected bike lanes that were rolled out in 2020.

Still, transportation advocacy groups have urged Mr. de Blasio to take a more aggressive approach and point to the examples set by cities like Paris, which committed to adding around 400 miles of bicycle lanes when the pandemic hit.

Making major changes to the streetscape would allow cities to build on the momentum the pandemic created toward using eco-friendly forms of transport and keep people on bicycles, scooters and mo-peds even as urban life and traffic returns, the groups say.

“Whatever your memory is of life on the street before Covid, it probably wasn’t positive — there was congestion, smog, danger for vulnerable street users,” said Danny Harris, executive director of Transportation Alternatives, an advocacy group. “We cannot go back to that normal.”

Britain Offers a Plan for Jobs, but Braces for a Wave of Layoffs

Lady Macbeth in Appalachia, and Other Tales by an American Master