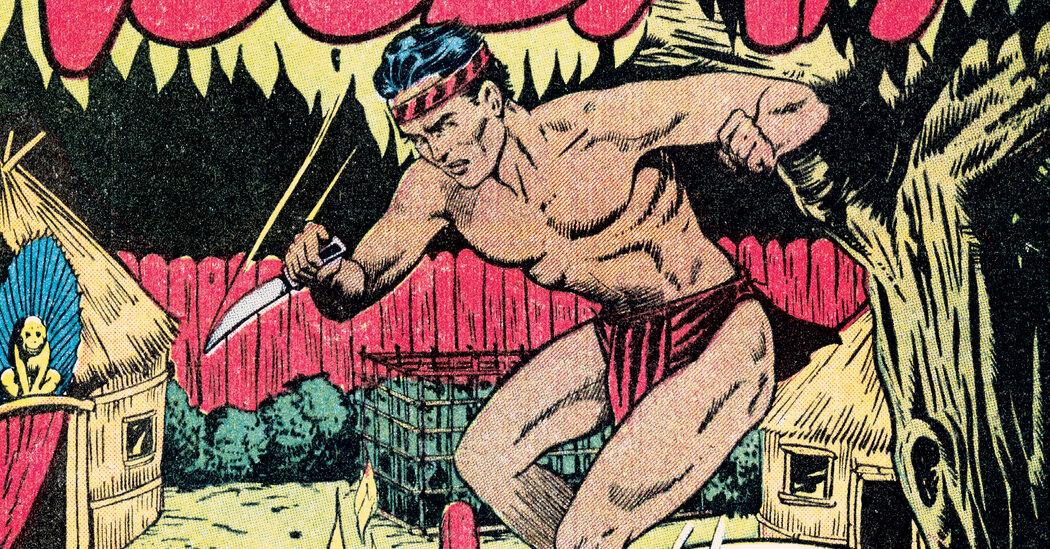 Ken Quattro’s deep dive into Black comic book artists started out of frustration. Twenty years ago, while researching a man named Matt Baker whose drawings were distinguished by his strong style, Mr. Quattro, a comics fan and blogger, kept coming up empty-handed. “There was nothing about him except that he was Black and that he died young,” said Mr. Quattro, who is known as the Comics Detective.

So he wrote to Samuel Joyner, a Black comic artist in Philadelphia and received a long, beautiful letter in return, not only telling him about Baker, but mentioning names of other Black artists Mr. Quattro had never heard of before.

Yet when he tried to follow up in the mainstream media, “there was zero,” Mr. Quattro said. He turned to the archives of Black newspapers and magazines. “I read thousands of them,” said the writer, who is Italian-American. “I found that these guys were celebrities in the Black media but were totally unknown in the white world. It was just two different worlds.”

What he found has been published in “Invisible Men: The Trailblazing Black Artists of Comic Books” (Yoe Books). Profiling 18 male artists from the Golden Age of comics, the 1930s to the ’50s, Mr. Quattro examines the struggles they faced not just in getting published, but in their day to day lives. Real life heroes, many of them helped fellow Black artists succeed and paved the way for generations to come. Accompanying their stories are dozens of rare illustrations collected by Mr. Quattro — full-color strips, comic book panels and dynamic covers, many of which had been lost to history. Super heroes with flowing capes, smartly dressed detectives, soldiers in battle, damsels in distress and characters in big, bold primary colors leap from the book’s pages.

Though many articles have been written about Black comic book characters, the book takes a close look at the lives of a group of Black comic book artists — many unknown even to the most ardent fans. In his introduction, Mr. Quattro explains the influence of George Herriman, whose groundbreaking work on the strip “Krazy Kat” predated the comic book industry. Herriman, who died in 1944, was called the “Leonardo da Vinci of comics” by Robert Crumb.

In his wake was Jay Paul Jackson, of Oberlin, Ohio, creator of Speed Jaxon, a secret agent who crash lands in the hidden African city of Lostoni, a self-contained civilization that predates the Black Panther’s Wakanda by two decades. Jackson’s character appeared in the Chicago Defender, a Black newspaper, in the 1940s. The following decade, battling racism in the industry, Jackson formed his own feature syndicate to distribute his “Home Folks” cartoon, a humorous, bird’s-eye view of the Black experience in the United States.

Mr. Quattro also tells the story of Orrin C. Evans, a former newspaperman who founded All-Negro Comics in 1947, the first comic ever created by an all-Black staff. With Black characters like Lion Man, the Africa-bound scientist drawn by Evans’s brother, George, along with the detective Ace Harlem, illustrated by John Terrell, the comic book was a groundbreaking success. But its second issue never came out, Mr. Quattro said, because white paper mill owners refused to sell Evans the pulp needed to print the comics.

Many of the artists Mr. Quattro profiles settled in New York City after moving from the South in the Great Migration of the early 20th century. Others were part of the Harlem Renaissance or got their start during World War II, providing diversity in an industry before it was a company goal. “Wartime provided a crack in a wall that these men may never have hurdled otherwise,” Mr. Quattro writes. Often their creations were white characters aimed at a white audience; especially in the South, comic book covers with a Black character would not be placed on newsstands.

Owen Charles Middleton, who worked as a freelance comic book artist from 1941 to 1944, wasn’t interested in comics at all but had worked as a sketch artist for the Chicago Tribune and as a medical illustrator. Middleton turned to comics to make a living during the war, when publishers were in need of accomplished artists. His artwork included Two Months in the Bush, about a white tail gunner shot down in the Solomon Islands.

Middleton had been a conscientious objector during World War I and had spent time in prison. In later years he got involved in the organized labor movement and wound up running as a labor party candidate for Senate in Brooklyn. He died two weeks before the election in 1954 but was still endorsed by the Amsterdam News, which urged voters to honor him by casting their ballots for him.

Mr. Quattro also examines the life of the Harlem Renaissance painter Elmer C. Stoner. One of Stoner’s first achievements, according to his wife, was helping design Planter’s Mr. Peanut. Stoner never discussed his work on the iconic image, and Planter’s attributed the drawing to an Italian-American teenager who won a nationwide contest for the company’s branded mascot. The boy’s drawing was enhanced by a professional illustrator — possibly Stoner — who added the top hat, monocle and cane (and without which the drawing is simply a big peanut with extremities).

Stoner would go on to paint and illustrate magazine advertisements and eventually work for white-owned comic shops, studios that resembled factory production lines, set up in the 1930s. Doc Savage, Blue Beetle and Phantasmo, Master of the World, were a few of the characters Stoner drew, usually under a pen name.

“I rarely saw people who looked like me in comic books,” said William H. Foster III, a comic book historian and retired professor whose 2005 book, “Looking for a Face Like Mine,” explores the portrayal of Black people in the comics. “You could have African characters, but never African-Americans.”

Matt Baker, who started Mr. Quattro on his research, was a Black artist who worked side by side with white artists in the celebrated Iger Studio, a comic packager, creating Voodah in 1945, which Mr. Quattro said was the first Black hero featured in a white comic book. Voodah, a Tarzan-like character, was replaced with a white version six issues in, catering to the demands of white distributors. Baker, known for his glamorous depictions of women, would go on to design covers for pulp romance comics.

The stories Mr. Quattro finds aren’t always pretty, but the book never shies away from the truth. He writes about Adolphe Barreaux, an artist and founder of his own studio, who created Sally the Sleuth. Barreaux, born in Charleston, S.C., moved to New York as a teenager and studied art at Yale University. Since he was passing as white, he was unable to reach out to and advance other Black artists for fear of being discovered.

Sanford Greene, the co-creator of the award-winning comic book series “Bitter Root,” worked for Marvel and DC Comics for years. He said he had hesitated to read the stories of early Black trailblazers, knowing the obstacles they faced would be hard to take.

Growing up before the internet, Mr. Greene, 48, said he often had no idea if his favorite artists were Black or white. “With social media, you were finally able to put names to faces,” he said. Inspired by the generation of Black artists that came right before him, such as Brian Stelfreeze and Denys Cowan, Mr. Greene added, “Seeing those faces made me that much more interested in getting into the industry.”

Mr. Greene said the concept for “Bitter Root,” created with the writers David Walker and Chuck Brown, was thought up in the days following the 2016 election. It revolves around a Black family of monster hunters living in Harlem in the 1920s in search of souls infected by a virus called hate. The killing of George Floyd and the protests that followed showed the world, he said, that “people are facing the power of racism, seeing that it’s not a person, it’s a system.”

“A lot has changed,” he said. “But there are still a lot of changes we have to push for.”

Mr. Quattro, 68, started reading comics back in 1961 and had dreams of becoming an artist himself. After studying journalism and fine arts in Michigan, he put his passion into stories for comic book collector magazines like Alter Ego and, later, his blog.

Though he doesn’t have a Ph.D. after his name, he is considered by many in the industry to be a top comics historian. One of his biggest scoops was discovering the court files of DC Comics vs. Bruns Publications, which pitted Superman against Wonder Man in a copyright infringement case in 1940. (Superman won). The court transcripts, which Mr. Quattro obtained from a Warner Brothers lawyer, are considered the Rosetta Stone of comic book history. All the major players from the burgeoning days of the industry testified in the case.

Most people come at the industry “with a myopic view, as a comics fan,” Mr. Quattro said. “I approach it as a part of history.”

He admits the book is just scratching the surface and is already compiling profiles of Black comic book artists from the Silver Age of comics (the mid 1950s to 1970) for a companion “Invisible Men” website.

Professor Foster, who has taught and lectured internationally about some of the artists in “Invisible Men,” lauded Mr. Quattro for taking the subjects to a new level. “This book is a treasure to me,” he said. “It’s one thing to turn the light on in a darkened room, but Ken went to each room in the house and turned on every light. The whole house has that aura.”

A Fair Wage and Ownership for Immigrants

Barrett refused to divulge her legal views on health care and abortion rights on...