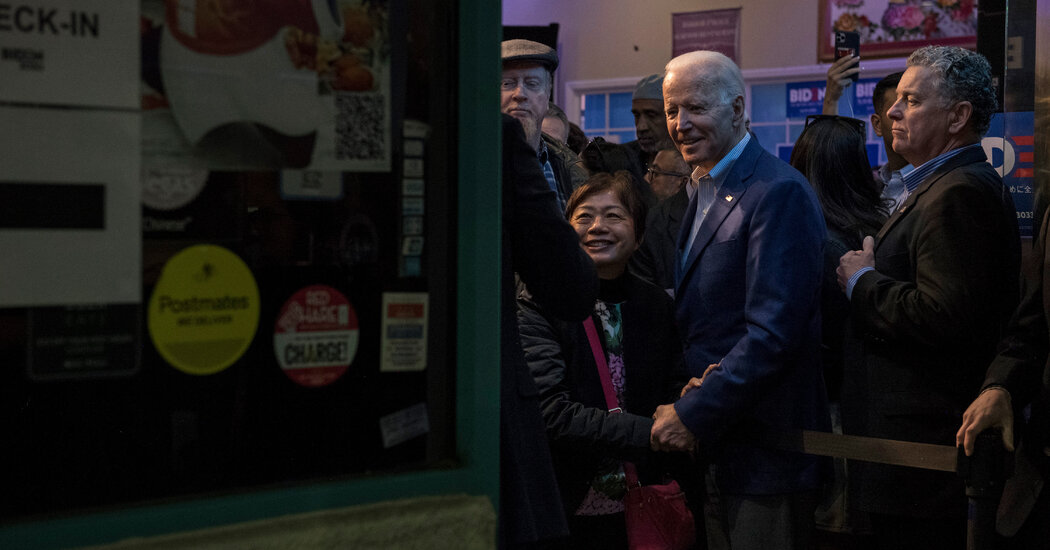 The message Asian-American voters sent in 2020 was clear: Seek us out, listen to what we tell you, and we can help you win.

They turned out in record numbers. In Georgia, the increase in Asian-American voters was so significant in the general election that they could play a decisive role in the two Senate runoff races this week. And on the ballot itself, Asian-American candidates were more visible in national politics than ever, most notably with Kamala Harris, a woman of South Asian descent, becoming the Vice President-elect.

But the election also offered some caution for Democrats who have long assumed that increasing racial diversity in the United States will benefit them at the ballot box: Demographics alone are not destiny. Asian-American voters and Latino voters made clear that while they generally support Democrats, they do not do so at the same rate as Black voters, and remain very much up for grabs by either party.

At the presidential level, Asian-Americans cast a record number of ballots in battleground states where Joseph R. Biden Jr. notched narrow victories. But a New York Times analysis showed that in immigrant neighborhoods across the country, Asian-American and Latino voters shifted to the right. Nationwide, preliminary data suggests that about one in three Asian-Americans supported President Trump — a slight uptick from his support in 2016.

For many Democrats who still hope that greater Asian-American political involvement will benefit them, the election illustrated that the party must go after nonwhite voters with the same nuanced approach and level of urgency that has generally been reserved for white voters in swing states.

“There is a small but still significant bloc of voters that needs to be courted — and that courting needs to be maintained because we’re going to have close elections,” said Varun Nikore, the president of the AAPI Victory Fund, a super PAC focused on mobilizing Asian-Americans and Pacific Islanders to vote for Democratic candidates.

But, he added: “Things can go backward. You can’t take the Asian vote for granted.”

Now, as Mr. Biden forms his administration, Asian-American congressional leaders and many of their colleagues are already chafing at what could be a cabinet without a single Asian-American secretary for the first time in decades.

Representative Grace Meng, Democrat of New York, who holds high-ranking positions in both the Democratic National Committee and the Congressional Asian Pacific American Caucus, sees the situation as an indication that the lessons of 2020 have yet to sink in.

“I don’t think we as a party have appreciated sufficiently the contributions that A.A.P.I. voters have made in this November’s election,” she said.

For years, Asian-Americans have been written off by both Democrats and Republicans as a small group of infrequent voters. Candidates often sought out prominent community members for donations, but with Asian-Americans making up less than 6 percent of the U.S. population, concentrated mostly in traditionally safe blue and red states like California, New York and Texas, they were seldom part of a presidential campaign’s calculus.

As a group that is mostly foreign born, however, Asian-Americans have become the country’s fastest-growing population of eligible voters as, year after year, Asian immigrants have naturalized fairly rapidly and then registered to vote. Over the last two decades, as their numbers grew, Asian-Americans as a whole moved left politically and slowly amassed enough power to help decide some tightly contested House races in districts where they had clustered.

Their influence expanded to presidential politics this cycle, beginning in the Democratic primary race. For the first time, three Asian-Americans and Pacific Islanders sought a major party’s nomination for president. One, Ms. Harris, is set to be vice president; another, the entrepreneur Andrew Yang, has been privately telling New York City leaders that he intends to run for mayor this year.

In the general election, early analysis of available data suggests that voting surged at a higher rate among Asian-Americans than among any other racial group. So, while Asian-Americans have generally been an afterthought for political campaigns, “that’s almost certain to change overnight,” said Tom Bonier, the chief executive of TargetSmart, a Democratic data firm.

Mr. Bonier found that in battleground states and nationally, the Asian-American early vote alone blew past the total Asian-American vote in 2016. When analysts get a complete picture of the 2020 electorate, he said, the data will probably show that the total number of ballots cast by Asian-Americans nearly doubled.

Despite the modest increase in support for Mr. Trump, roughly two-thirds of Asian-American voters backed Mr. Biden — a fact often cited by the Asian-American officials who have urged the president-elect to pick a cabinet secretary from their community.

In addition to selecting Ms. Harris as his running mate months ago, Mr. Biden has chosen two Asian-Americans for cabinet-level positions: Neera Tanden to head the White House budget office and Katherine Tai to serve as U.S. trade representative. A transition spokesman said the picks were part of Mr. Biden’s vision for “the most diverse cabinet in history.”

With the Senate runoffs approaching on Tuesday, Asian-American political operatives from across the country have joined local groups in Georgia to try to ensure that the tens of thousands of Asian-Americans who voted for the first time in the general election will vote again this week.

“We got the victory that we wanted at the state level to to flip Georgia blue,” Aisha Yaqoob, the head of the Asian American Advocacy Fund, said of Mr. Biden’s win in November. But she added that turning out fatigued voters again for the Senate races would be a challenge.

“So that’s going to be our big mission,” she said. “Explaining that and really breaking it down for people — making it feel real to them that they could be the deciding vote.”

In the presidential election, many Asian-American voters said they were particularly energized by Ms. Harris’s candidacy and repelled by Mr. Trump’s insistence on blaming China for the coronavirus and labeling it the “kung flu” — messaging that corresponded with an increase in reports of hate crimes toward Asian-Americans.

Mr. Trump’s rhetoric on the virus, among other things, made progressive organizers and Democratic candidates optimistic that Asian-American voters would flock to them. In some cases, it did motivate people.

“I really wanted to vote because I didn’t want Donald Trump to be the president,” said Jieying Chen, 24, a graduate student in South Philadelphia who became a naturalized citizen in 2017 and voted for the first time this fall.

Aisha Zainab, 19, whose parents immigrated from Pakistan, felt that Mr. Trump’s political viewpoint “isn’t what represents America.” She voted for the first time in Michigan, a state Mr. Biden flipped.

But the president had his own set of Asian-American supporters, some of whom he pulled over from the Democratic side.

Timothy Paul, 47, of Cobb County, Ga., immigrated to the United States from India years ago on a work visa and voted for Barack Obama twice. But he said he voted for Mr. Trump in 2016 and 2020, motivated by the president’s positions on taxes and limiting undocumented immigration.

“Democrats just keep writing checks — they will bankrupt the country,” he said, noting that he intends to vote for the Republican incumbents in the Senate runoffs this week. “Soon they will give you free Disney+ and Hulu.”

Roughly 30 percent of Asian-American voters do not identify as either Democrats or Republicans, and many are settling in the suburban swing districts that are the focus of both parties.

It is a demographic and political reality that has been playing out in parts of Southern California for years. Randall Avila, the executive director of the Republican Party of Orange County, said he had found that many Asian-American voters — and potential candidates he had worked to recruit — approached Republican ideas with an open mind.

“We’re not going to back down from any community,” he said.

That commitment paid off as two California Republicans, Young Kim and Michelle Steel, unseated Democratic incumbents to become among the first Korean-American women elected to Congress.

Janice Lim, 51, of Yorba Linda, Calif., voted for both Ms. Kim and Mr. Trump, and said that the Republican Party shares many of the values that are most dear to her and her immigrant parents: family, education, free exercise of personal liberties and limited government.

“People go, ‘Oh, yay, Young Kim, she’s Asian-American and she’s a woman.’ I always wonder why people say that,” said Ms. Lim, who is a city parks and recreation commissioner. “I always think it should be more about who she represents and what her ideals are.”

Leaders of progressive advocacy organizations, like Mr. Nikore of the AAPI Victory Fund, said down-ballot losses like the ones in California showed it was past time for Democrats to focus on shoring up support among voters of color.

The real victory, experts on the Latino and Asian-American vote agreed, would be for voters of color to be pursued with the same vigor as white voters, who are routinely grouped into subcategories based on where they live, or their income or education level.

“Democrats need to stop obsessing about white rural voters and white suburban moms,” said Janelle Wong, a professor of American studies at the University of Maryland.

Local organizers like Ms. Yaqoob cited several reasons for the extraordinary A.A.P.I. voting spike in the general election. For instance, they said, grass-roots volunteers had built trust with voters months earlier while encouraging them to participate in the census or dropping off food during the early days of the pandemic.

In Texas, two Democrats of Asian and South Asian heritage lost closely watched congressional races. One of them, Sri Preston Kulkarni, was defeated in a House race in the Houston suburbs by a significant margin, even after some polls suggested he would win the majority-minority district. The other, Gina Ortiz Jones, fell to Tony Gonzales in the predominantly Hispanic 23rd Congressional District.

Mr. Kulkarni conceded in an interview that he was surprised by his loss, but heartened by the Asian-American turnout this cycle, the strongest evidence of these voters’ potential sway in American politics.

One place they may demonstrate their growing political power is in Georgia this week. Neil Makhija leads an Indian-American political organization that is running a $2.5 million campaign to turn out A.A.P.I. voters in the state’s Senate runoffs. He sees the significant increase in Asian-American voter participation in November as a success — and a lesson.

“What we’re going to try to do is take some of what we’ve learned,” he said, “and really go all in.”

Fire breaks out in powerhouse of Srisailam hydroelectric plant in Telangana, 9 feared trapped;...