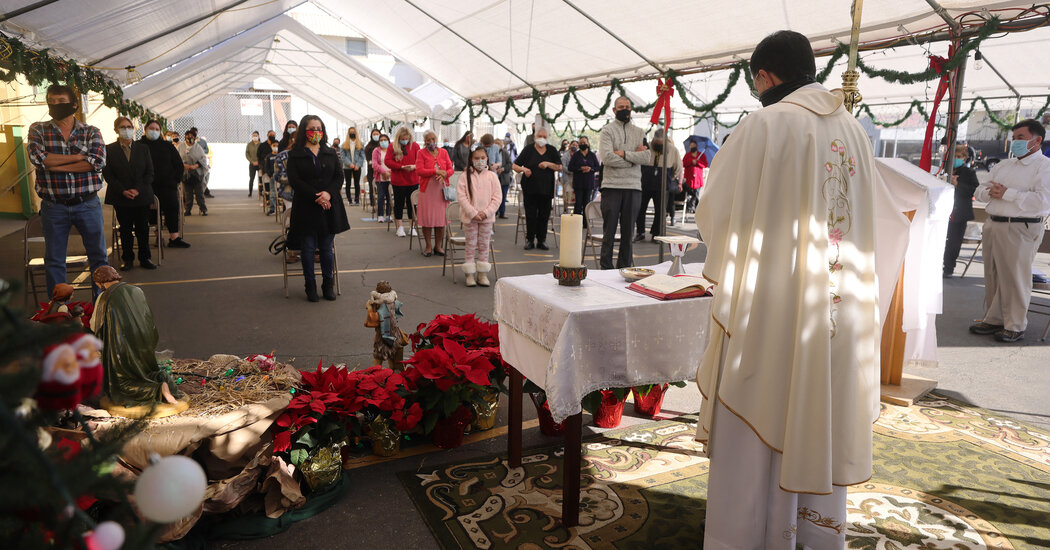 The stay-at-home orders in place for Southern California and the San Joaquin Valley were theoretically eligible to expire on Monday, but in a grim post-Christmas reality check, Gov. Gavin Newsom said that it was “self-evident” that the restrictions must be extended.

“Things, unfortunately, will get worse before they get better,” the governor said in a news conference on Monday.

[Track coronavirus cases, as well as hospitalizations and deaths, by county in California.]

Hospitals — already overwhelmed across much of the state — must prepare for what experts have projected to be a “surge on top of a surge, arguably on top of another surge,” stemming from the holidays, Mr. Newsom said.

And the state has sent a team to Los Angeles County to help address an influx of patients, which led to people being turned away from emergency rooms at alarming rates over the weekend.

“Routine E.R. care is being slowed,” Mr. Newsom said. “The impact of this pandemic is being felt on the entire hospital system, and could impact each and every one of us — God forbid.”

California has in recent weeks become the epicenter of the pandemic, with more than two million confirmed virus cases, and 24,331 deaths, according to a New York Times database.

Intensive care units have been at or near capacity for weeks in Southern California and the Central Valley. Doctors and nurses have been forced to treat patients in lobbies and hallways. Tents have been erected to serve as waiting rooms, and in some cases, as field hospitals.

And even if most health care providers hadn’t formally begun rationing care, experts have said that full hospitals will probably result in fewer people seeking care they need, which is most likely already causing more deaths.

[See how full intensive care units are at hospitals near you.]

The current tidal wave of infections in the state, the nation’s most populous, started rising before Thanksgiving. As case numbers continued to skyrocket early this month, state leaders announced a plan for regional stay-at-home orders tied to intensive care unit capacity.

The restrictions, officials said at the time, could expire in three weeks, as long as intensive care units were projected to have 15 percent of their capacity available. The idea that trends would reverse — or at least level off — within that time felt optimistic, but theoretically possible.

But capacity in the Southern California region, which includes Los Angeles, Orange and San Diego Counties, dropped below the 15 percent threshold to trigger the restrictions almost immediately. So did capacity in the San Joaquin Valley, which has been particularly hard hit throughout the pandemic.

Now, some 98 percent of Californians are living under the restrictions, which prohibit gatherings of people from different households and require restaurants to serve only takeout.

Mr. Newsom said the state would most likely make the extension of the orders official today.

(This article is part of the California Today newsletter. Sign up to get it delivered to your inbox.)

Here are a few more things to know:

It rained in Southern California

On Sunday night, Southern California got its first real storm in months. Lightning flashed. Thunder clapped. Angelenos (like me) were wrested from deep slumber by the sound of pouring rain. A lot of people felt compelled to tweet about it.

On Monday, it hailed. According to the National Weather Service in Los Angeles, some mountain areas got roughly a foot of snow.

Although the weather prompted warnings about debris flows, light flooding and bad driving, the news was generally met with glee. Rain, of course, dampens fire risk and helps spur plant growth in places that have burned.

Tuesday was set to be sunny.

California Today goes live at 6:30 a.m. Pacific time weekdays. Tell us what you want to see: CAtoday@nytimes.com. Were you forwarded this email? Sign up for California Today here and read every edition online here.

Jill Cowan grew up in Orange County, graduated from U.C. Berkeley and has reported all over the state, including the Bay Area, Bakersfield and Los Angeles — but she always wants to see more. Follow along here or on Twitter.

California Today is edited by Julie Bloom, who grew up in Los Angeles and graduated from U.C. Berkeley.

Bettye LaVette Didn’t Know the Beatles’ ‘Blackbird.’ Then It Helped Her Fly.

How Liberals Opened the Door to Libertarian Economics