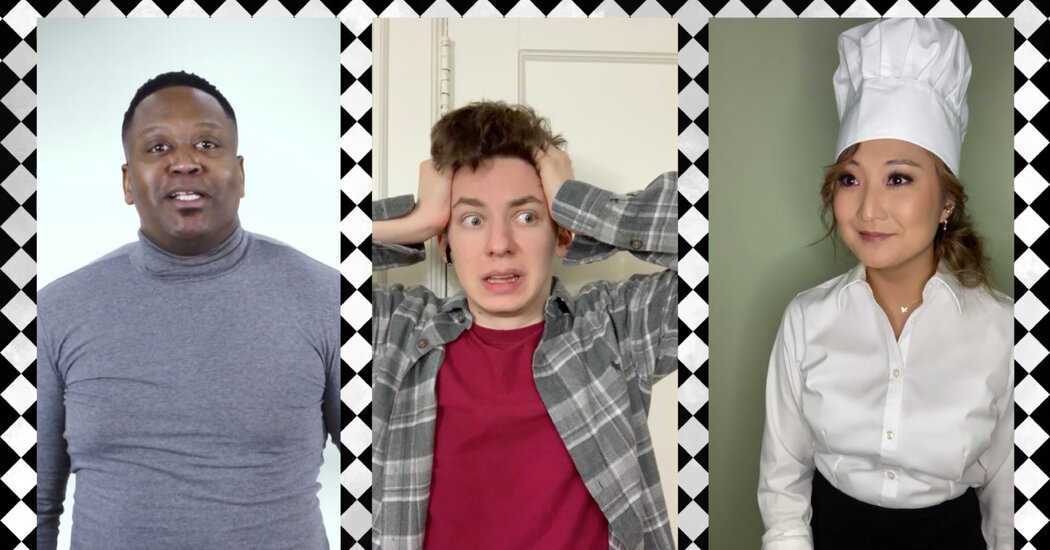 As bad as the pandemic has been for plays, it has been even worse for musicals, which are not only intensely collaborative but also inherently unhygienic. The next “A Chorus Line” won’t emerge while everyone is standing six feet apart. No new “Hamilton” can spit its rhymes from behind a wall of masks.

But the urge to tell stories in song and dance does not go dark just because theaters do; it finds new mediums. And so we now have “Ratatouille: The TikTok Musical,” a show that turns crowdsourcing from a danger into an aesthetic. Compared with the excellent 2007 Disney-Pixar film “Ratatouille,” it’s a trifle, but I mean that in the culinary sense: It’s a silly, multilayered delight.

No people, or even rats, were harmed in the making of the show, which premiered on New Year’s Day as a benefit for the Actors Fund and is streaming until 7 p.m. Eastern time on Monday. Its mostly online creation allowed contributors from all over the country, many of them young and apparently stuck in their parents’ basements, to collaborate with old hands. Whether the novel development process will change the way musicals are made in the future remains to be seen, but “Ratatouille” serves the moment admirably.

Credit that in part to how fast it happened. Just this August, Emily Jacobsen, a 26-year-old teacher, posted a 15-second ditty called “Ode to Remy” on TikTok. Remy is the animated feature’s rat protagonist, dreaming of becoming a fine Paris chef despite his family’s doubts and the logistical problems of rodents in kitchens. Operating from inside the toque of a bumbling garbage boy named Linguini, he eventually succeeds.

“Ode to Remy” doesn’t get into all that: Just a squib, it draws its brief humor from the contrast between its high-flown lyrics (“may the world remember your name”) and its small, squeaky, hairy subject. It is sarcasm set to a tiny tune.

But then the hive mind of TikTok swarmed, as fans and collaborators contributed extensions and overlays to a project that wasn’t yet a project. Soon a burgeoning meme’s worth of material accumulated: songs, arrangements, set designs, makeup concepts, choreography and even key art — everything except an actual show.

It still lacks the “actual show” part; the haste that gave “Ratatouille” its moxie has also kept it shallow. Only slivers of the TikTok material made it into the hourlong piece, and even less of the movie’s richer action. Most of what passes for the book, “adapted for the stage” (though there is no stage) by Michael Breslin and Patrick Foley, is bald narration delivered directly to the camera to get as quickly as possible from number to number. Luckily, the job of delivering it falls almost entirely on Tituss Burgess, playing Remy in a rat-gray turtleneck; he finds the right throwaway tone for the throwaway material.

The rest of the cast — all the leads are pros — is pointed and stylish enough that you wish they had more to do than sing numbers culled from TikTok and enhanced by the show’s musical team. As Linguini, Andrew Barth Feldman, a recent Evan Hansen, seems to have animated his face to match Pixar’s version: He’s instantly adorable while looking like he still might gnaw your toe. Adam Lambert as Remy’s chill brother, André De Shields as a forbidding food critic and Mary Testa, in a magic-marker mustache, as the suspicious head chef, all prove expert in the art of the one-song performance.

Those songs are good enough, if in some cases undernourished. Testa sells a classic “sneaky villain” number called “I Knew I Smelled a Rat”; Lambert rocks out to “Rat’s Way of Life” — with amusingly cloned choreography by Ellenore Scott — and De Shields makes much of the wanly nostalgic title song.

But only Burgess gets a real Broadway showstopper: an anthem called “Remember My Name,” which the arranger Daniel Mertzlufft and the orchestrator Macy Schmidt have built from the kernel of Jacobsen’s “Ode to Remy” into a classic Disney Act I finale in the brassy manner of Alan Menken. It even has a nifty Howard Ashman-style lyric (by Kate Leonard): “I won’t let a narrow-minded view/Determine/What vermin/Can do.”

Otherwise, the authors try to compensate for the missing content with a host of inside jokes, familiar faces and Broadway Easter eggs. (Check out the cameo by Priscilla Lopez and the references to “In the Heights” and “Les Misérables.”) Among the ensemble I was glad to spot, even in bit parts, musical theater up-and-comers like Larry Owens, Natalie Walker and Raymond J. Lee. Also on hand is the entire cast of “Six” — presumably because Lucy Moss, the co-director of that show, also directs “Ratatouille” with frenetic good spirits.

The presence of the “Six” cast, whose March 12 opening was canceled at the last moment by the pandemic shutdown, provides perspective; that “Ratatouille” has raised about $1.6 million and counting for the Actors Fund matters more than whether it is great or groundbreaking.

And, in truth, I am not convinced that the TikTok mind-set can be applied to musical theater content (as opposed to its process) going forward. As long as works like “Ratatouille” — see also Mertzlufft’s “Grocery Store” and “Thanksgiving” — remain stuck halfway between the sincere appropriation of classic musical comedy style and the impulse to satirize its hackneyed tropes, they will never achieve the full strength of either position and graduate beyond the virtual stage of the “Brooks Ratkinson Theater.”

Yet the tone of deflationary tribute nevertheless feels timely and instructive. By calling to mind similar elements in actual Disney musicals, “Ratatouille” forces you to think differently about its models. A big rat anthem like “Remember My Name” is a hilariously silly idea, but not, after all, very different from one for a mermaid or a hunchback. Disney itself was built on a mouse.

So maybe the hive mind is on to something. Certainly it would be healthier for the theater if Broadway musicals could be built, like “Ratatouille,” in just a few months, by individuals, not conglomerates. Our current process, which takes years and more money than anyone but a corporate behemoth can muster, too often squashes idiosyncrasy and cuts off artists from their communities of inspiration.

In “Ratatouille,” those sources are live and potent: There may be too many chefs, but they offer, as one character puts it, “just the right amount of cheese.”

Jacob Blake Shooting: No Charges Against Officer in Kenosha, Wisconsin

As Trump Calls for Schools to Fully Reopen, His Son’s School Says It Will...