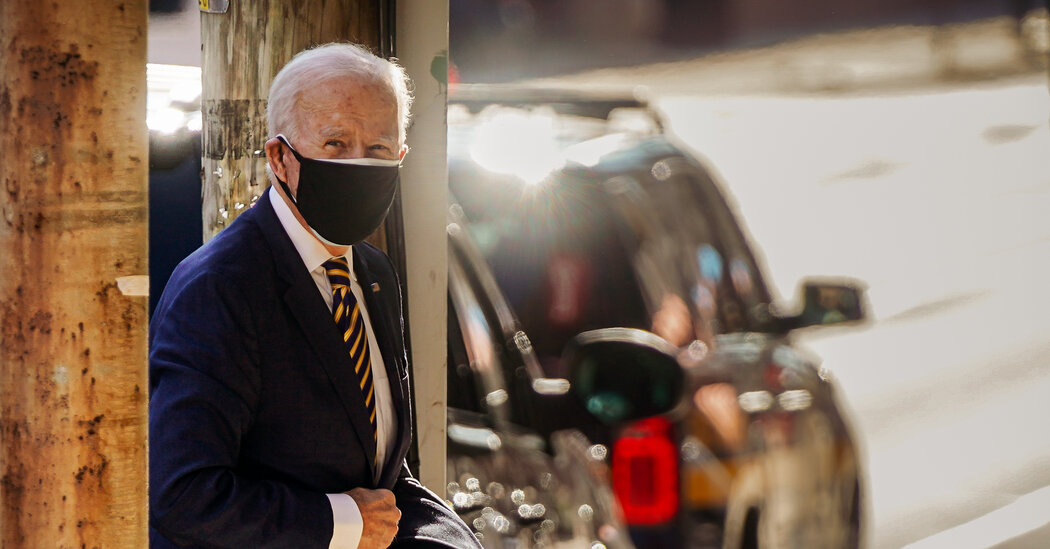 WASHINGTON — President-elect Joseph R. Biden Jr.’s inaugural committee released new details on Sunday about his trip to the White House after his swearing-in at the U.S. Capitol that further underscore the downsized and largely virtual nature of his Inauguration Day plans.

After taking the oath of office, Mr. Biden will conduct a traditional review of military troops meant to highlight the peaceful transfer of power, the Presidential Inaugural Committee said in a statement. The committee also said Mr. Biden would receive an official escort, with representatives from every branch of the military, for one city block before arriving at the White House.

The statement left many details unclear, including the nature of the rest of Mr. Biden’s trip of about 1.5 miles to the White House from the Capitol. By long tradition, a huge presidential motorcade rolls slowly down Pennsylvania Avenue past thousands of cheering spectators, with the newly inaugurated president walking some of the route.

But because of the coronavirus pandemic, the inaugural committee this year has urged Americans not to travel to Washington for the event. The committee hopes to deter large crowds that could transmit the virus, which is killing more than 2,000 Americans every day.

In place of the grand, in-person extravaganzas of years past, the inaugural committee said it was planning a “virtual parade” across the country, featuring “the iconic images of a new president, a new vice president and their families making their way to the White House” along with “musical acts, local bands, poets, dance troupes and more paying homage to America’s heroes on the front lines of the pandemic.”

Committee officials are planning to mimic the varied segments from around the nation that were broadcast during the Democratic National Convention in August, when the spread of the virus similarly prohibited large physical gatherings.

Mr. Biden and Vice President-elect Kamala Harris have each been vaccinated against the coronavirus and thus will face little personal risk. But inauguration officials hope to avoid an event that could exacerbate the furious spread of the virus around the country, and to model behavior that reflects public health guidelines.

The announcement on Sunday came days after workers dismantled a large parade viewing stand that had been built in recent weeks in front of the White House, apparently with a measure of hope for a somewhat more traditional event. But the continued spread of the virus has made that impossible.

Maju Varghese, the executive director of the Presidential Inaugural Committee — a nonprofit entity funded by private donations — said in a statement that the committee was working for “an inclusive and accessible celebration that brings Americans together and unifies our nation, especially during such a tough time for our country.”

The planned “Pass in Review,” in which Mr. Biden and Ms. Harris will gaze out at uniformed service members, will be conducted on the east side of the Capitol, after Mr. Biden’s swearing-in on the building’s west side. There, he is expected to deliver an address to the nation flanked by a pared-down gathering of government officials and dignitaries.

The traditional military review is intended, in part, to commemorate the United States’ tradition of a peaceful transfer of power, but its announcement came on a day when that foundational aspect of American democracy was in some doubt.

An audio recording emerged on Sunday of a Saturday phone conversation in which President Trump pressured Georgia’s Republican secretary of state, Brad Raffensperger, to “find” him enough votes to overturn the election and threatened Mr. Raffensperger with “a criminal offense.” Also on Sunday, 10 former secretaries of defense jointly published a statement in The Washington Post warning against any political interference in the presidential transition by the Pentagon, whose leadership Mr. Trump has stacked with loyalists since the election in November.

It remains unclear whether Mr. Trump plans to attend Mr. Biden’s inauguration, much less participate in the traditional welcoming of the incoming president to the White House before a joint limousine ride to the Capitol for the ceremony. The inaugural committee’s statement made no mention of the outgoing president, and a committee official had no further details.

In Home District, McCarthy Faces Some Backlash From the Right

239 Experts With One Big Claim: The Coronavirus Is Airborne