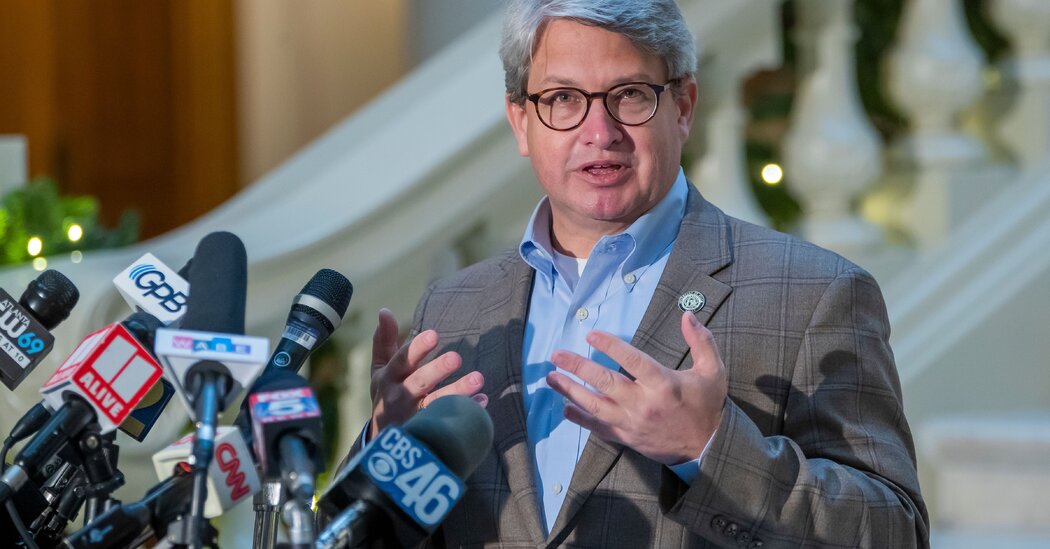 Gabriel Sterling, a top election official in Georgia, delivered a scathing refutation on Monday of President Trump’s false claims of voter fraud, running through a long list of already-debunked conspiracy theories and systematically debunking each one again.

It was like “Groundhog Day,” he said with evident frustration, adding of the fraud claims, “This is all easily, provably false, yet the president persists, and by doing so undermines Georgians’ faith in the election system.”

Mr. Sterling implored Georgians to vote in Tuesday’s Senate runoff elections and not to be deterred by disinformation.

“If you want your values reflected by your elected officials, I strongly beg and encourage you, go vote tomorrow,” he said. “Do not self suppress your own vote. Don’t let anybody steal your vote that way.”

The office of Georgia’s secretary of state, Brad Raffensperger, scheduled the news conference with Mr. Sterling a day after the disclosure of an hourlong phone call in which President Trump repeated a litany of conspiracy theories and asked Mr. Raffensperger to “find 11,780 votes” to overturn the will of Georgia voters, who chose President-elect Joseph R. Biden Jr.

Among many other false claims, Mr. Trump and his lawyers have claimed that thousands of votes were cast in Georgia by people who were under 18, weren’t registered to vote, registered late, or registered with a P.O. box instead of a residential address. The secretary of state’s office investigated the claims, Mr. Sterling said, and did not find a single ballot cast by anyone in any of those categories.

“I’ve got such a long list,” he said as he rattled off claims about ballot scanning devices being hacked (“it’s very hard to hack things without modems”) and people replacing parts in Dominion voting machines (“I don’t even know what that means”). He added that Mr. Raffensperger does not have a brother named Ron who works for a Chinese technology company, as one of the conspiracies retweeted by the president claims — nor, in fact, does he have a brother named Ron at all.

“I wanted to scream,” he said of his reaction to the call between Mr. Trump and Mr. Raffensperger. “Well, I did scream at the computer and I screamed in my car at the radio, him talking about this, because this has been thoroughly debunked.”

He demurred when asked if he considered Mr. Trump’s behavior an “attack on democracy,” but said, “I personally found it to be something that was not normal, out of place, and nobody I know who would be president would do something like that to a secretary of state.”

The Pressure to Be Perfect Turns Deadly for Celebrities in Japan

For Boris Johnson, a Rare Respite From Bad News