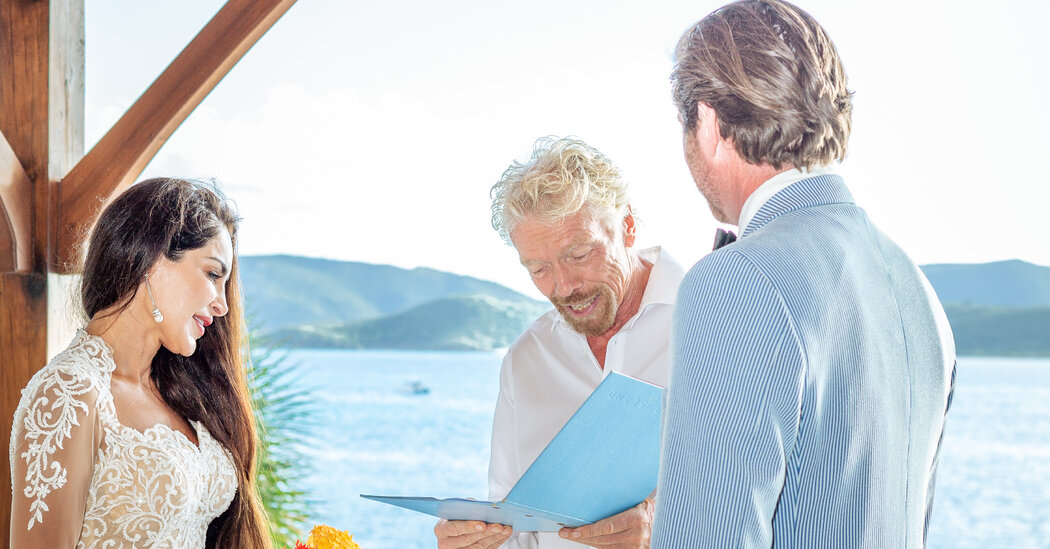 “He said, ‘don’t worry about bringing a lot of clothes, people don’t really care about getting dressed up here,’” she said. “I was like, what does that mean? I arrived at the airport and asked a woman who worked there where’s the lounge? She said, ‘What lounge? There are only two gates here.’ That’s when it started to sink in that it was going to be a big change.”

“I knew it would be a challenge, but I was in love, so everything was easy,” she continued.

He proposed almost one year to the day they met, en route to Aspen. They planned to marry in June 2020 on a yacht in the French Riviera, but Covid-19 ended that idea. Instead, they decided to elope in the British Virgin Islands, just the two of them.

But the bride had something up her sleeve. And that’s where Richard Branson comes back into play. Dr. Neal had long admired Mr. Branson, especially his “entrepreneurial prowess and adventurous spirit.”

So Ms. Yabandeh decided to see if Mr. Branson would be available to unofficially officiate. He can’t legally marry couples, but he has been known to perform ceremonies, most notably for Larry Page, a Google founder, and the actor Kate Winslet, who married Mr. Branson’s nephew, Edward Abel Smith.

On Dec. 8, they flew to Necker Island, Mr. Branson’s private Island in the Caribbean. Dr. Neal had no idea why a man who looked vaguely like Richard Branson was waiting for them.

“I was floored,” Dr. Neal said when he finally realized it really was Richard Branson. “I couldn’t believe it. But at the same time I could, because Sayé is a woman that makes the impossible completely possible.”

After spending a few nights on Necker, the couple flew to Tortola on Dec. 14 and were legally wed there by Patricia Nadim, who signed their marriage certificate at the Registrar General Office. They will both use the surname Neal-Yabandeh.