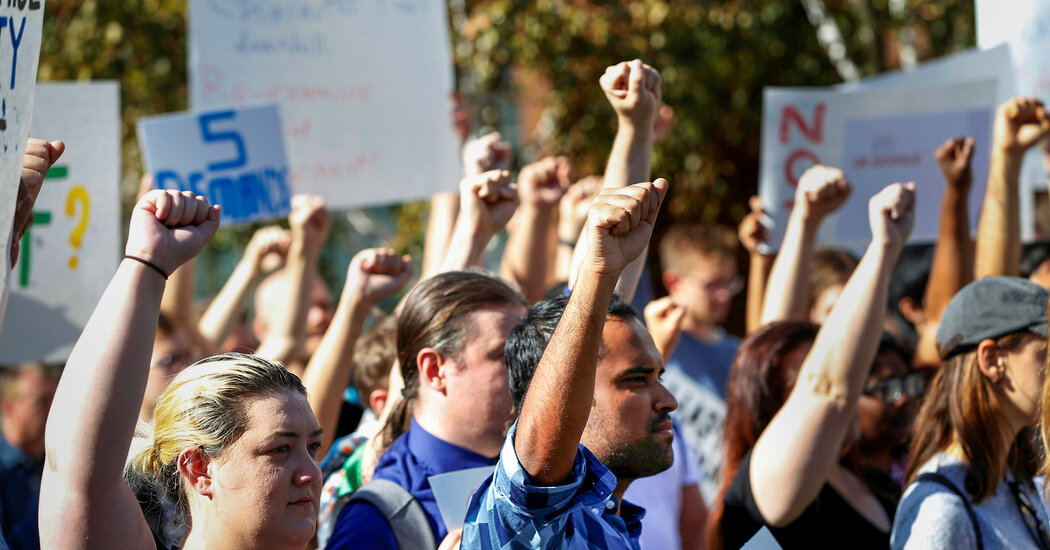 Most recently, Timnit Gebru, a leading artificial intelligence researcher and one of the few Black women in her field, said she was fired over her work to fight bias. Her offense? Conducting research that was critical of large-scale AI models and being critical of existing diversity and inclusion efforts. In response, thousands of our colleagues organized, demanding an explanation. Both of us have heard from colleagues — some new, some with over a decade at the company — who have decided that working at Alphabet is no longer a choice they can make in good conscience.

Workers have mobilized against these abuses before. Organized workers at the company forced executives to drop Project Maven, the company’s artificial-intelligence program with the Pentagon, and Project Dragonfly, its plan to launch a censored search engine in China. Some of Alphabet’s subcontractors won a $15 minimum hourly wage, parental leave, and health insurance after an employee outcry. And the practice of forced arbitration for claims of sexual harassment was ended after the November 2018 walkout — albeit only for full-time employees, not contractors. A few months later, Google announced that it would end forced arbitration for employees for all claims.

To those who are skeptical of unions or believe that tech companies are more innovative without unions, we want to point out that these and other larger problems persist. Discrimination and harassment continue. Alphabet continues to crack down on those who dare to speak out, and keep workers from speaking on sensitive and publicly important topics, like antitrust and monopoly power. For a handful of wealthy executives, this discrimination and unethical working environment are working as intended, at the cost of workers with less institutional power, especially Black, brown, queer, trans, disabled, and women workers. Each time workers organize to demand change, Alphabet’s executives make token promises, doing the bare minimum in the hopes of placating workers.

It’s not enough. Today, we’re building on years of organizing efforts at Google to create a formal structure for workers. So far, 226 of us have signed union cards with the Communications Workers of America — the first step in winning a recognized bargaining unit under U.S. law. In other words, we are forming a union.

We are the workers who built Alphabet. We write code, clean offices, serve food, drive buses, test self-driving cars and do everything needed to keep this behemoth running. We joined Alphabet because we wanted to build technology that improves the world. Yet time and again, company leaders have put profits ahead of our concerns. We are joining together — temps, vendors, contractors, and full-time employees — to create a unified worker voice. We want Alphabet to be a company where workers have a meaningful say in decisions that affect us and the societies we live in.

Kerala plus one results 2020 results likely to be released this month; check keralaresults.nic.in