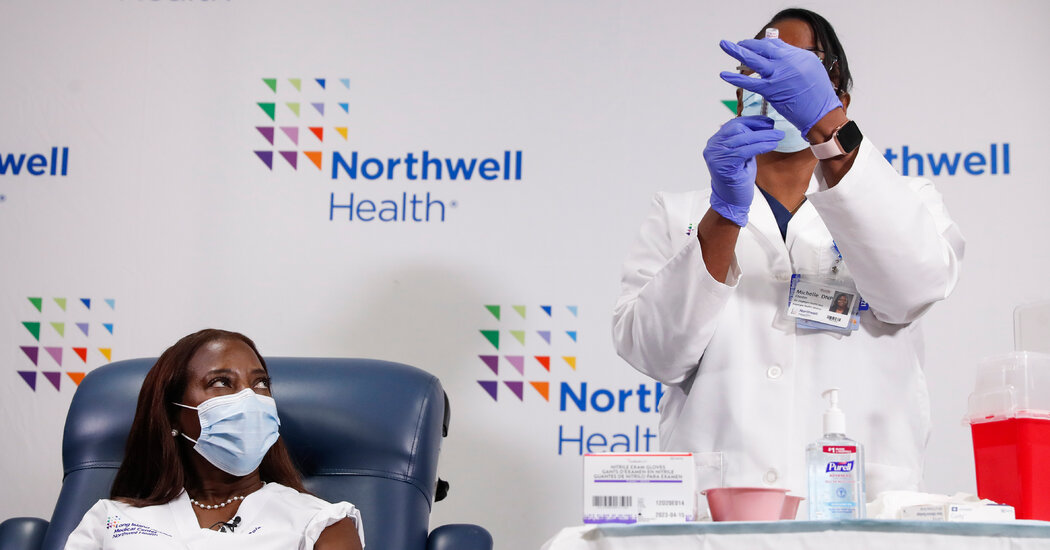 Weather: Mostly cloudy, with a high in the low 40s. Scattered sprinkles or flurries possible.

Weeks ago, when a nurse in Queens became the first person in the United States to get the coronavirus vaccine, officials said the end of the pandemic was in sight.

But the only way to close this chapter — vaccinating millions of New Yorkers — is going slowly, even as infections and deaths surge statewide. And on Monday, the state confirmed its first case of a more contagious variant of the virus.

In an effort to speed up the rollout, Gov. Andrew M. Cuomo threatened penalties for hospitals that don’t pick up the pace, and allowed more groups of health care workers to get the vaccine.

[The confirmation of the coronavirus variant in New York could complicate the state’s inoculation plans.]

Mr. Cuomo is compelling hospitals to speed up vaccinations.

The governor was under mounting pressure to overhaul the state’s vaccine distribution. He warned that hospitals may face fines up to $100,000 and may not receive future shipments if they do not use their allocated doses faster.

Avery Cohen, a spokeswoman for Mayor Bill de Blasio, questioned the governor’s pledge to cut off hospitals. “Threatening to revoke the privilege of vaccination from the city’s public hospital system is punitive and unnecessary,” Ms. Cohen said.

Mr. de Blasio is aiming to offer the vaccine 24/7 when possible.

In New York City, which has a population of more than eight million, only about 110,000 have gotten the first dose of the vaccine. Still, the mayor pledged to reach one million doses by February.

On Monday, Mr. de Blasio promised to open three new “vaccination hubs” in the Bronx, Brooklyn and Queens and to offer shots 24/7 when possible. The city also hopes to double the number of locations offering the vaccine to 250 sites by the end of January.

Mr. de Blasio said “there’s lots more we can do” if the Cuomo administration allowed the city to inoculate a wider range of essential workers and people 75 and older.

The governor and mayor have feuded for years, but they have recently shown a united front.

Despite their rocky relationship, especially during the pandemic, Mr. de Blasio steered clear of directly criticizing Mr. Cuomo, instead calling on “the state” to change its approach.

Mr. Cuomo, though, shifted blame for the slow rollout away from his administration and urged local leaders who oversee public hospital systems to take “personal responsibility” for their performance.

And finally: Street art of SoHo

Late last spring, when many shops in SoHo boarded up their storefronts during the protests against racism and police violence, artists transformed swaths of plywood into works of art.

For a time, the streets doubled as an outdoor gallery. Now, the exhibit is moving indoors.

“The Voices of the Soho Renaissance” is on view at the National Arts Club’s Grand Gallery until Jan. 27. The effort — a partnership between the club, in Gramercy Park, and the Soho Renaissance Factory, a collective formed by artists who met one another last year on New York City’s streets — includes some of the plywood artwork, as well as images of the protests by the photographer Graham MacIndoe.

On its website, the National Arts Club called blank plywood surfaces “the perfect platform to reflect and amplify the concerns, fears and optimism of our city” during the coronavirus lockdown and the protests.

Konstance Patton, an artist in the collective, said she and other artists created a support network — sharing supplies and tracking stolen or taken-down artwork, and even holding outdoor movie nights in a time when people couldn’t gather inside.

“There are many artists that we’ve worked alongside that are still out there working,” Ms. Patton added. “We just organized, and basically it was a friendship. It felt very safe.”

Trevor Croop, another collective member, said, “We lifted each other up out of months of isolation.”

The gallery is open Monday through Friday, 10 a.m. to 5 p.m., as well as most weekends. Admission is free, but visitors must make a reservation.

It’s Tuesday — take it all in.

Metropolitan Diary: Through the wall

The new neighbors moved in sometime in August. The evidence was the music that started to come through the wall that separated our apartments. Some Parquet Courts, a little Phish, a substantial amount of Flaming Lips.

Despite the wall’s best efforts, I could tell they had the superior sound system.

We exchanged numbers during a chance encounter in the elevator. Gabriel and Brianna. A few weeks later, I texted to invite them over for a drink.

They walked across the hallway barefoot, bringing homemade pumpkin roll and cider.

I made whiskey sours. And for the first time, we all listened to music together, in the same room.

New York Today is published weekdays around 6 a.m. Sign up here to get it by email. You can also find it at nytoday.com.

What would you like to see more (or less) of? Email us: nytoday@nytimes.com.

The Sunday Read: ‘In the Line of Fire’

Truck Bomb in Somalia Kills 3 and Wounds 3, Including a U.S. Soldier

Melinda Gates On Covid-19: It’s Time to Demand More of All Our Leaders