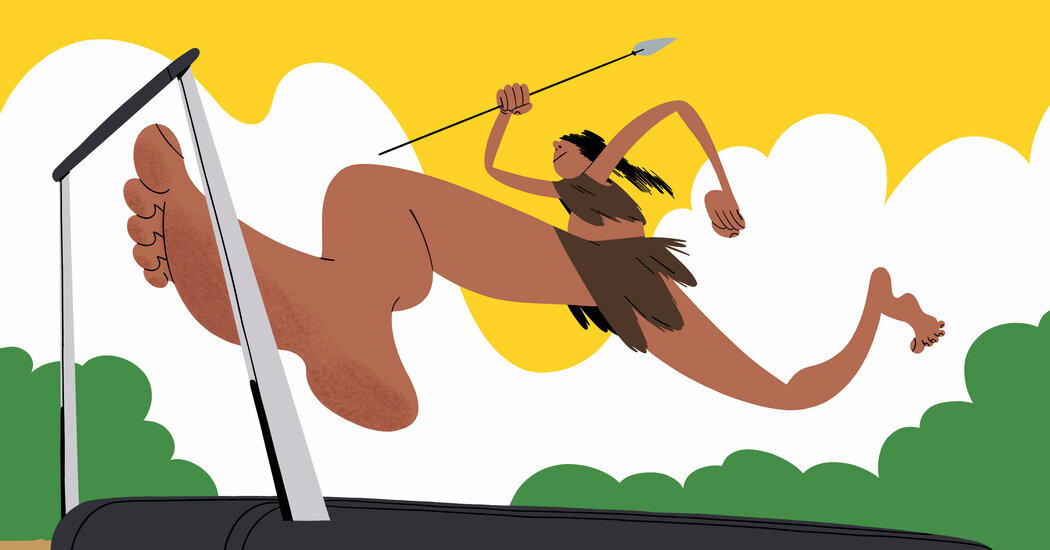 Lieberman mostly avoids getting too technical for nonscientists, and scatters the book with odd or fun details to keep the narrative moving along, as when he writes of treadmills that they are “loud, expensive and occasionally treacherous, and I find them boring.” Then he goes the extra step (so to speak), and shares that in Victorian times treadmills were used to “punish prisoners and prevent idleness. For more than a century, English convicts (among them Oscar Wilde) were condemned to trudge for hours a day on enormous and steplike treadmills” — a grueling punishment that almost anyone who has used a treadmill can appreciate.

In addition to exorcising myths and detailing what kinds of exercise we’re good at, as well as why these particular activities matter for our physical well-being, Lieberman also gives us permission to be kind to ourselves if we’d rather not bother. It’s not that we’re weak or lazy or failing at life if we don’t want to get up and run a 5K; it’s simply that burning extra calories is not something that humans as a species have ever had to do before. In fact it was generally a terrible idea when we all lived like the Hadza, when lost calories could mean death.

So what works? It’s not especially complicated, and Lieberman outlines the science behind his prescription of a mix of moderate-intensity aerobic exercise, strength training and high-intensity interval training. This is probably the best bet for most of us. He also looks at how exercise can help with diseases like obesity, diabetes, cardiovascular conditions, Alzheimer’s and cancer. (He includes Covid-19 in a section about respiratory tract infections and other contagions, but his guidance is almost a year out of date since this section was edited in March 2020 — his recommendation to wash our hands and stop touching our faces seems almost quaint.)

Most important, Lieberman doesn’t judge those who find exercising difficult, even after knowing that they should be doing it, because exercise still isn’t all that fun — and I say that as someone who has run multiple ultramarathons without anyone demanding that I do so.

“Part of the problem is the distinction between ‘should’ and ‘need.’ I know I should exercise to increase the probability that I will be healthier, happier, and live longer with less disability, but there are numerous legitimate reasons I don’t need to exercise,” he writes.

Happily, there are ways to get your mind and body past the fact that exercise can be unpleasant. Listen to something else during a workout; make exercise a game; train with others in a group. Those boot campers might have looked silly to me, but they had the right idea.

Two P.R. Experts at F.D.A. Have Been Ousted After Blood Plasma Fiasco