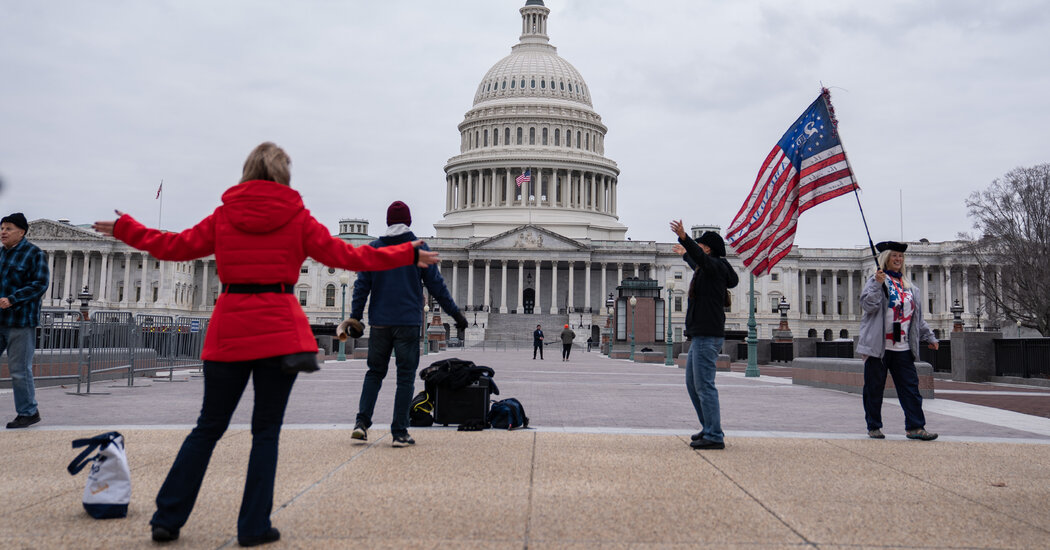 The modern G.O.P., however, isn’t like anything we’ve seen before, at least in American history. If there’s anyone who wasn’t already persuaded that one of our two major political parties has become an enemy, not just of democracy, but of truth, events since the election should have ended their doubts.

It’s not just that a majority of House Republicans and many Republican senators are backing Trump’s efforts to overturn his election loss, even though there is no evidence of fraud or widespread irregularities. Look at the way David Perdue and Kelly Loeffler are campaigning in the Senate runoffs in Georgia.

They aren’t running on issues, or even on real aspects of their opponents’ personal history. Instead they’re claiming, with no basis in fact, that their opponents are Marxists or “involved in child abuse.” That is, the campaigns to retain Republican control of the Senate are based on lies.

On Sunday Mitt Romney excoriated Ted Cruz and other congressional Republicans’ attempts to undo the presidential election, asking, “Has ambition so eclipsed principle?” But what principle does Romney think the G.O.P. has stood for in recent years? It’s hard to see anything underlying recent Republican behavior beyond the pursuit of power by any means available.

So how did we get here? What happened to the Republican Party?

It didn’t start with Trump. On the contrary, the party’s degradation has been obvious, for those willing to see it, for many years.

Way back in 2003 I wrote that Republicans had become a radical force hostile to America as it is, potentially aiming for a one-party state in which “elections are only a formality.” In 2012 Thomas Mann and Norman Ornstein warned that the G.O.P. was “unmoved by conventional understanding of facts” and “dismissive of the legitimacy of its political opposition.”

If you’re surprised by the eagerness of many in the party to overturn an election based on specious claims of fraud, you weren’t paying attention.

But what is driving the Republican descent into darkness?

Is it a populist backlash against elites? It’s true that there’s resentment over a changing economy that has boosted highly educated metropolitan areas at the expense of rural and small-town America; Trump received 46 percent of the vote, but the counties he won represented only 29 percent of America’s economic output. There’s also a lot of white backlash over the nation’s growing racial diversity.

The past two months have, however, been an object lesson in the extent to which “grass roots” anger is actually being orchestrated from the top. If a large part of the Republican base believes, groundlessly, that the election was stolen, it’s because that’s what leading figures in the party have been saying. Now politicians are citing widespread skepticism about the election results as a reason to reject the outcome — but they themselves conjured that skepticism out of thin air.

And what’s striking if you look into the background of the politicians stoking resentment against elites is how privileged many of them are. Josh Hawley, the first senator to declare that he would object to certification of the election results, rails against elites but is himself a graduate of Stanford and Yale Law School. Cruz, now leading the effort, has degrees from Princeton and Harvard.

The point isn’t that they’re hypocrites; it is that these aren’t people who have been mistreated by the system. So why are they so eager to bring the system down?

I don’t think it’s just cynical calculation, a matter of playing to the base. As I said, the base is in large part taking its cues from the party elite. And the craziness of that elite doesn’t seem to be purely an act.

My best guess is that we’re looking at a party that has gone feral — that has been cut off from the rest of society.

People have compared the modern G.O.P. to organized crime or a cult, but to me, Republicans look more like the lost boys in “Lord of the Flies.” They don’t get news from the outside world, because they get their information from partisan sources that simply don’t report inconvenient facts. They don’t face adult supervision, because in a polarized political environment there are few competitive races.

So they’re increasingly inward-looking, engaged in ever more outlandish efforts to demonstrate their loyalty to the tribe. Their partisanship isn’t about issues, although the party remains committed to cutting taxes on the rich and punishing the poor; it’s about asserting the dominance of the in-group and punishing outsiders.

The big question is how long America as we know it can survive in the face of this malevolent tribalism.

The current attempt to undo the presidential election won’t succeed, but it has gone on far longer and attracted much more support than almost anyone predicted. And unless something happens to break the grip of anti-democratic, anti-truth forces on the G.O.P., one day they will succeed in killing the American experiment.

Why Crying Is Healthy