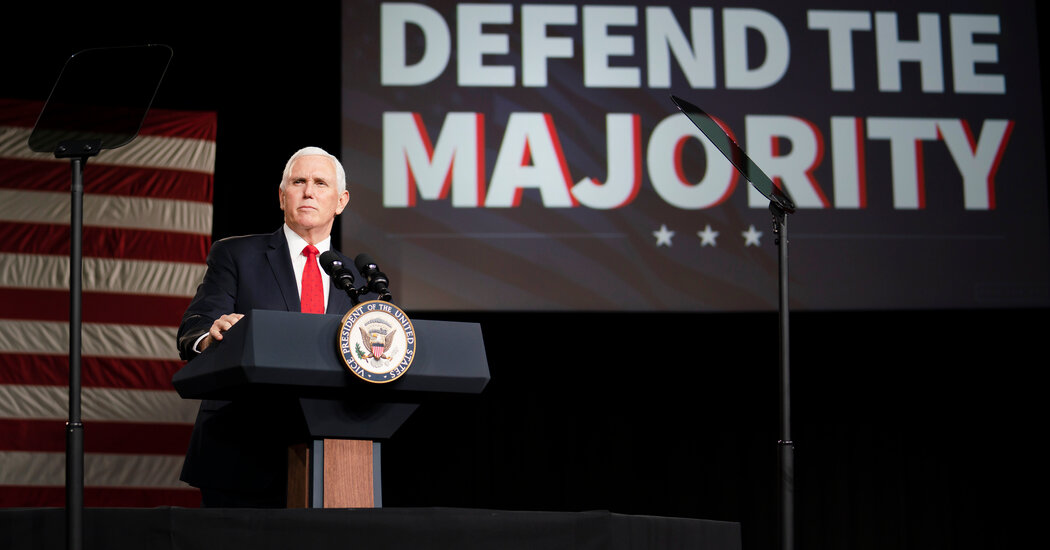 WASHINGTON — Speaking to supporters of President Trump on Monday at the Rock Springs Church in Milner, Ga., Vice President Mike Pence implored the crowd to vote in the two runoff elections Tuesday that will determine whether Republicans maintain control of the Senate.

“I am here for one reason and one reason only, and that is that Georgia and America need David Perdue and Kelly Loeffler back in the Republican majority,” Mr. Pence said.

But the crowd had a message for him, too.

“We need you do the right thing Jan. 6!” one supporter cried out. “Stop the steal!” shouted others. The crowd applauded.

If Mr. Pence has tried to skirt Mr. Trump’s efforts to cling to power, his reception in Georgia on Monday served as the latest reminder of the delicate role he will play on Wednesday, when Congress conducts what is typically a ceremonial duty of opening and counting certificates of electoral votes.

As president of the Senate, Mr. Pence is expected to preside over the pro forma certification of the Electoral College vote count in front of a joint session of Congress. It is a constitutionally prescribed, televised moment in which Mr. Pence will name the winner of the 2020 presidential election, Joseph R. Biden Jr.

It is also a moment some of Mr. Pence’s advisers have been bracing themselves for ever since the president lost the election and stepped up his baseless claims of widespread voter fraud. There is no chance of Mr. Pence not being there, people close to him said. Mr. Pence’s aides have told people that they view the vice president’s role as largely ceremonial.

“I know we all have got our doubts about the last election,” Mr. Pence said Monday in Georgia, attempting to assuage Trump supporters. “I want to assure you that I share the concerns of millions of Americans about voting irregularities. I promise you, come this Wednesday, we will have our day in Congress.”

It was not clear, perhaps by design, what he meant. Mr. Pence does not have unilateral power to affect the outcome of Wednesday’s proceedings. But he has carefully tried to look like he is loyally following the president’s lead even as he goes through a process that is expected to end with him reading out a declaration that Mr. Biden is the winner.

After nearly a dozen Republican senators said they plan to object to the certification of the vote on Wednesday, the vice president’s chief of staff, Marc Short, issued a carefully worded statement intended not to anger anyone.

“The vice president welcomes the efforts of members of the House and Senate to use the authority they have under the law to raise objections and bring forward evidence before the Congress and the American people on Jan. 6,” he said.

The statement, which frustrated senators who say Mr. Trump is trying to thwart democracy, helped to mollify the president, according to one person close to him.

But it was not enough to squash the belief of many Trump supporters — and the president himself — that the vice president could still somehow help overturn the results.

Mr. Trump himself has retweeted supporters referring to the “Pence Card theory,” which claims, inaccurately, that the vice president has the power to reject the certified election results, and calling on Mr. Pence to do so.

On Monday, after Mr. Pence returned from Georgia, the vice president and Mr. Trump were expected to hear a last-minute pitch at the White House from John Eastman, another Trump lawyer. Mr. Pence also met with Senate parliamentarians for hours on Sunday to prepare himself and the president for what he would say while on the Senate floor.

The fact that Mr. Pence’s role is almost entirely scripted by those parliamentarians is not expected to ease a rare moment of tension between himself and the president, who has come to believe Mr. Pence’s role will be akin to that of chief justice, an arbiter who plays a role in the outcome. In reality, it will be more akin to the presenter opening the Academy Award envelope and reading the name of the movie that won Best Picture, with no say in determining the winner.

Some of Mr. Trump’s other advisers have helped fuel the idea that Mr. Pence could affect the outcome of the election. In an interview with Jeanine Pirro on Fox News on Saturday night, Peter Navarro, a White House trade adviser, claimed inaccurately that Mr. Pence could unilaterally grant a demand by Senator Ted Cruz of Texas and 11 other Republican senators for an “emergency 10-day audit” of the election returns in the states Trump allies are disputing.

On Saturday morning, Mr. Trump called Mr. Pence and expressed “surprise” that the Justice Department had weighed in against a lawsuit filed by Trump supporters, including House members, seeking to expand Mr. Pence’s powers in the process. The suit was dismissed on Friday by a federal judge in Texas whom Mr. Trump had appointed.

One person close to Mr. Pence described Wednesday’s duties as gut-wrenching, saying that he would need to balance the president’s misguided beliefs about government with his own years of preaching deference to the Constitution.

Members of the vice president’s circle expect that Mr. Pence will follow the rules while on the Senate floor and play his ceremonial role as scripted, aides said. But after that, he will have to compensate by showing his fealty to Mr. Trump.

A tentative final foreign trip by Mr. Pence to visit Israel, Bahrain and Belgium was scrapped, while more events to talk up Mr. Trump’s legacy at home are being considered, according to a person familiar with the plans. Aides would not say whether Mr. Pence would attend Mr. Biden’s inauguration.

Pence aides said they expected the vice president to walk through what is expected to happen on Capitol Hill with Mr. Trump before Wednesday, in part to inoculate himself against public criticism in real time.

But even with his practice at managing the president, Republican strategists described Mr. Pence as being in the worst political position of any potential 2024 major Republican presidential candidate. The vice president will be unable to avoid a nationally televised moment when he declares Mr. Biden the winner, potentially disappointing those who believe Mr. Trump was the victor and angering those who think he has the power to change the outcome.

“His best bet is to buck and dodge and make it through without infuriating either side,” said William Kristol, the conservative columnist and prominent “Never Trump” Republican who was chief of staff to Vice President Dan Quayle.

“He has to hope the Trump people are furious at Tom Cotton and anyone else who doesn’t go along,” Mr. Kristol said, referring to Senator Tom Cotton of Arkansas, an ally of the president’s who said he would not join the effort to challenge the Electoral College results. “He has to hope establishment Republicans are furious at Josh Hawley and Ted Cruz. And then he’s the guy who didn’t offend anyone.”

Four years ago, Mr. Pence was facing a difficult re-election for governor of Indiana when Mr. Trump’s advisers at the time saw opportunity in choosing the mild-mannered, silver-haired conservative who was popular among the evangelical voters whose support Mr. Trump needed.

Since then, Mr. Pence has played the role of the president’s relentless defender and — with rare exception — prevented daylight from coming between them.

In an administration that has cycled through four chiefs of staff, four national security advisers and four press secretaries, the vice president’s political calculation has long been that being the unstintingly loyal No. 2 would give him the best shot at inheriting the Trump mantle.

But with just 16 days left in the administration, Mr. Pence is at risk of meeting the fate that he has successfully avoided for four years: being publicly attacked by the president.

Since the election, his political advisers have wanted Mr. Pence focused solely on the two Senate runoffs in Georgia and on the distribution of the coronavirus vaccine.

Neither has been of significant interest to the president.

“Pence’s only play is to be loyal, subservient and supportive right down to the last minute he’s vice president,” said Michael Feldman, a former chief of staff to Vice President Al Gore, who recalled his former boss playing the awkward role prescribed by the Constitution of announcing his own defeat after Mr. Gore lost the 2000 presidential election. “Pence will do whatever he thinks will please the president and his supporters in this.”

Black, Native American, and Fighting for Recognition in Indian Country