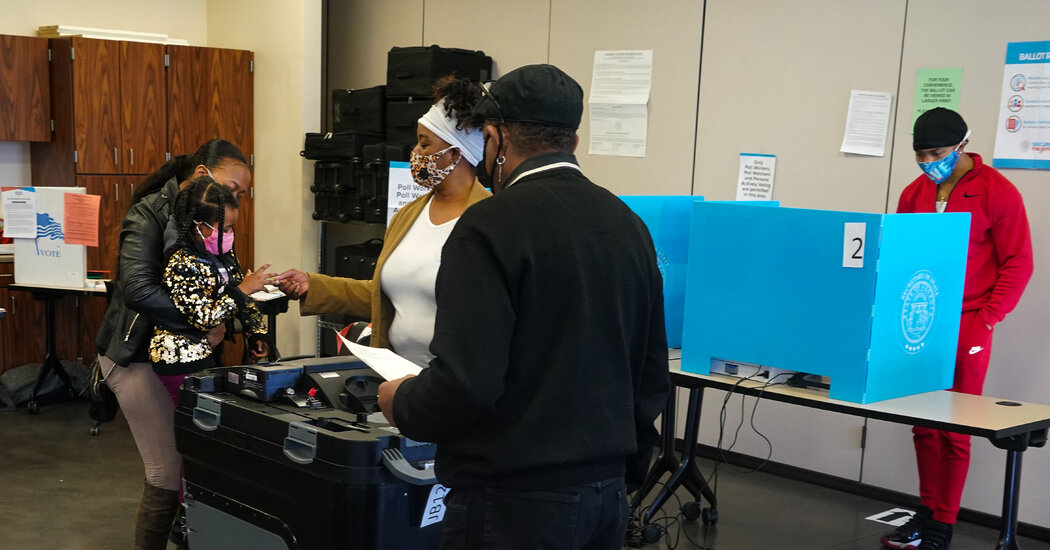 MARIETTA, Ga. — These were the deciders, the voters who shuffled along in lines that began before dawn on Tuesday and continued until long after the sun had set, their ballots the coda to a pair of contests that would determine which political party controls the U.S. Senate.

For weeks, they had been bombarded with ads on television and radio, with text messages and phone calls, all stressing the magnitude of their choices.

“You always hear every election cycle that this vote matters more than anything,” said Jasmine Knapp, 30, who voted — for whom, she would not say — at a polling site in Dalton, about 90 miles north of Atlanta. “But that feels true this time.”

The gravity of the high-stakes contests was reflected in the participation: More than three million people cast their ballots early, or roughly 40 percent of the state’s registered voters — a staggering level of turnout in a runoff election.

On Tuesday, steady lines at dozens of polling sites signaled continued enthusiasm for a contest that has implications far beyond Georgia. The direction of American politics for at least the next two years will be shaped by the outcome.

The state in recent weeks has been gripped by talk of transformation, as a once reliably Republican stronghold voted for President-elect Joseph R. Biden Jr., the first Democratic victor in 28 years. And the runoffs have emerged as a test of how much Georgia has evolved, as the Democratic challengers — Jon Ossoff and the Rev. Raphael Warnock — forced both of the state’s incumbent Republican senators — David Perdue and Kelly Loeffler — into a second round of voting.

Those circumstances factored heavily in the decisions of many voters, who said their opinions of President Trump and concerns over which party controls the Senate drove them to the polls. The individual candidates mattered less, they said.

The campaigns, too, painted the races in the starkest of terms, with the Democratic candidates called radicals and socialists by their Republican challengers, and the Democrats, enraged at Mr. Trump’s baseless claims of a fraudulent general election, insisting that nothing less than democracy was at stake.

“We’re tired of this,” said Sony Tiggs, an account manager who moved to the Atlanta suburbs from Chicago two years ago and who voted for the Democrats.

In Dalton, a rural area where Mr. Trump held a rally on Monday to mobilize support for the Republican candidates, conservatives knew their task was to overcome a strong Democratic turnout in early voting and absentee ballots.

“Turnout is high, you can tell because there’s never a line,” said Lane Lewis, 44, who waited until election day to vote because he was more confident that his ballot would be counted.

In the affluent Atlanta suburbs of Cobb County, which have been at the heart of Georgia’s changing politics, many voters talked about seeking balance. Some voted for Mr. Biden in the general election, but then voted for Mr. Perdue and Ms. Loeffler, citing concerns about Democrats having too strong of a grip on power.

“It’s critical,” Carol Farrish, a teacher who said she voted for the Republicans, said of her vote. “We need a balance of power so that one party can’t steamroll the other.”

Tyler Applonie, 37, said he voted for Mr. Trump in November but was not terribly discouraged when Mr. Biden won. While he said he supported Mr. Trump’s policies, he was leery of the sense of chaos Mr. Trump had stirred up in the country.

On Tuesday, Mr. Applonie said he voted for the Republican candidates mainly because he was worried about Democrats gaining too much power. He said he also believed the country benefited from the push and pull of negotiations.

“It almost feels radical to be in the center,” said Mr. Applonie, who works in sales for a technology company. “My hope is compromise. The risk is that there could be complete gridlock.”

But gridlock is precisely what Joy Phenix wanted.

“They need a backstop,” Ms. Phenix said of the Democrats, adding that, as a Libertarian, her aim was to try to stand in the way of government overreach. She voted for Mr. Biden and the Republican senators; she said that if Mr. Trump had won, she would have voted for the Democrats.

The group published an online video ad in which a woman in a well-appointed kitchen identifies herself as a Georgian, a mother of three — and a Biden voter. “In the Senate runoff, I’m voting for David and Kelly,” the woman says. “We just need to take a breath. America needs balance. With Joe, Kelly and David, we’ll have it.”

Voting on Tuesday was relatively smooth, with voting rights groups, the political parties and the campaigns all reporting no significant problems. State elections officials said the average wait time statewide was five minutes.

Across the state, a steady stream of people cast their ballots. In some places, hourlong lines stretched outside polling places. In others, it was barely a trickle. Tyler Perry, the entertainment mogul who lives in Atlanta, flew home from Wyoming after his absentee ballot never arrived. “Too important to miss,” he said on Twitter. “Too important to miss!”

In the west end of Atlanta, Whitney Leonard, 24, said she was not beholden to the Democratic Party, but she believed that Democratic control of the Senate was crucial to undoing the damage she said Mr. Trump had caused.

She cast her very first ballot in the general election. She had been incarcerated and finished probation last year. “You don’t know how much of a privilege it is to vote,” Ms. Leonard said, “until it’s been taken away from you.”

Outside a church in Norcross, in Gwinnett County outside of Atlanta, Rosie Ramirez tried to take a selfie with a “Vote Aquí” banner flapping behind her. The peach sticker on her sweater declared that she had cast her ballot.

She was also worried about health care because she needs a liver transplant. “It’s very, very expensive,” she said. “I need good insurance.”

But standing in the choppy wind on a crisp afternoon, she was enveloped in enthusiasm.

“It’s my country!” Ms. Ramirez said after casting her ballot. “I came here to express my voice!”

Venezuela, Once an Oil Giant, Reaches the End of an Era

Should I Warn My Ex’s Fiancée About His Cheating Heart?

‘Here’s Another Fun Thing You Can Do’