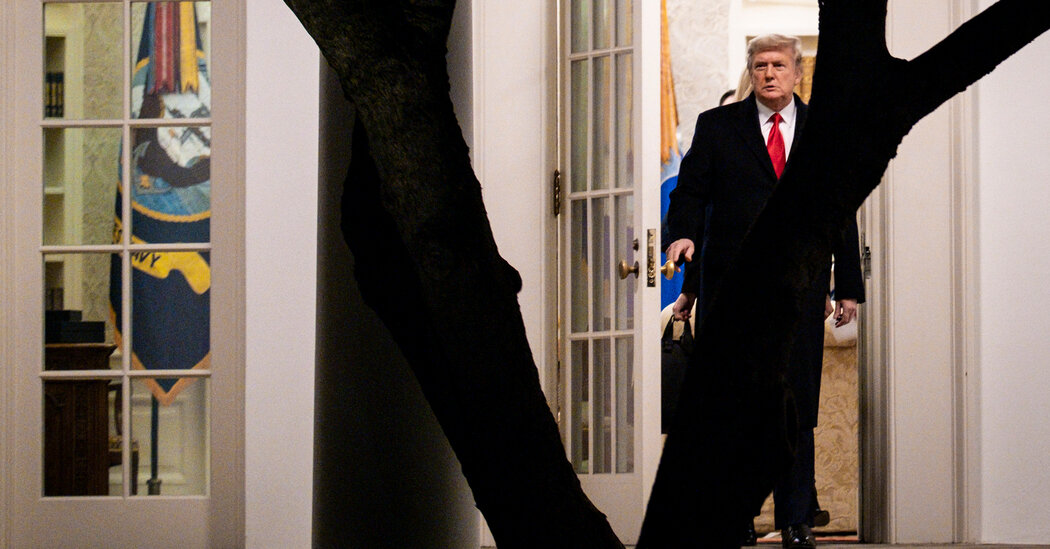 According to Title 52, Section 20511 of the United States Code, anyone who “knowingly and willfully deprives, defrauds, or attempts to deprive or defraud the residents of a state of a fair and impartially conducted election process” for federal office can be punished by up to five years in prison.

Donald Trump certainly seems to have violated this law. He is on tape alternately cajoling and threatening Georgia’s secretary of state, Brad Raffensperger, to “find 11,780 votes,” enough to give him a winning margin in a state that he lost. He may have also broken federal conspiracy law and Georgia election law.

“This is probably the most serious political crime I’ve ever heard of,” Michael Bromwich, a former inspector general for the Department of Justice, told me. “And yet there is the high likelihood that there will be no accountability for it.”

At this point, demanding such accountability feels like smashing one’s head into a brick wall, but our democracy might not be able to stagger along much longer without it. Republicans already often treat victories by Democrats as illegitimate. Their justification for impeaching Bill Clinton was flimsy at the time and looks even more ludicrous in light of their defenses of Trump. Trump’s political career was built on the racist lie that Barack Obama was a foreigner ineligible for the presidency.

Now Trump and his Republican enablers have set a precedent for pressuring state officials to discard the will of their voters, and if that fails, for getting their allies in Congress to reject the results.

None of those conditions are likely to be permanent, though. Minimally decent Republicans are particularly endangered. Expect Trumpists to mount primary challenges to them and replace them with cynics, cranks and fanatics.

True democracy in America is quite new; you can date it to the civil rights era. If Trump’s Republican Party isn’t checked, we could easily devolve into what political scientists call competitive authoritarianism, in which elections still take place but the system is skewed to entrench autocrats.

Some are trying to constrain Trump’s lawlessness. Two Democratic members of the House, Ted Lieu and Kathleen Rice, asked the F.B.I. director, Christopher Wray, to open a criminal probe. In Atlanta, the Fulton County district attorney has expressed openness to bringing a case, saying, “Anyone who commits a felony violation of Georgia law in my jurisdiction will be held accountable.”

But there is little appetite in the House for impeaching Trump again, though he transparently deserves it. (“We’re not looking backwards, we’re looking forward,” Hakeem Jeffries, chairman of the House Democratic Caucus, said on Monday.) Joe Biden doesn’t seem to want his attorney general to investigate Trump, though he’s also said he wouldn’t stand in his or her way. And experts point to numerous reasons federal prosecutors might decline to bring a case.

The first is what we might call the psychopath’s advantage: Prosecutors would have to prove that Trump knew that what he was doing was wrong. “You’re not dealing with your ordinary fraudster or your ordinary criminal or even your ordinary corrupt politician,” said Bromwich. “He seems to believe a lot of the lies that he’s telling.”

There’s also the sheer political difficulty of prosecuting a former president. “My guess is that in the weeks and months that a prosecutor takes to develop a case like that, they’re at the end of the day going to say, ‘The guy’s not in office, nothing happened, we’re not spending our resources on it,’” the Republican election lawyer Benjamin Ginsberg told me. “Which doesn’t take away from the really immoral nature of the call.”

Taken on their own, most excuses for not investigating or prosecuting Trump make at least some sense. Launching an impeachment less than three weeks before Biden’s inauguration might appear futile. It could even feed right-wing delusions by creating the impression that Democrats think Trump might be able to stay in office otherwise. Both the Biden administration and Democrats in Congress will be fully occupied dealing with the devastation to public health and the economy that Trump is leaving behind. Beyond its legal challenges, a federal prosecution of Trump would maintain his toxic grip on the country’s attention.

Yet if there is no penalty for Republican cheating, there will be more of it. The structure of our politics — the huge advantages wielded by small states and rural voters — means that Democrats need substantial majorities to wield national power, so they can’t simply ignore the wishes of the electorate. Not so for Republicans, which is why they feel free to openly scheme against the majority.

During impeachment, Republicans who were unwilling to defend the president’s conduct, but also unwilling to penalize him, insisted that if Americans didn’t like his behavior they could vote him out. Americans did, and now Trump’s party is refusing to accept it. It’s evidence that you can’t rely on elections to punish attempts to subvert elections. Only the law can do that, even if it’s inconvenient.

Congress Did Not Finish Certifying the Election Results. What Happens Next?

How Plants Can Help People Grow