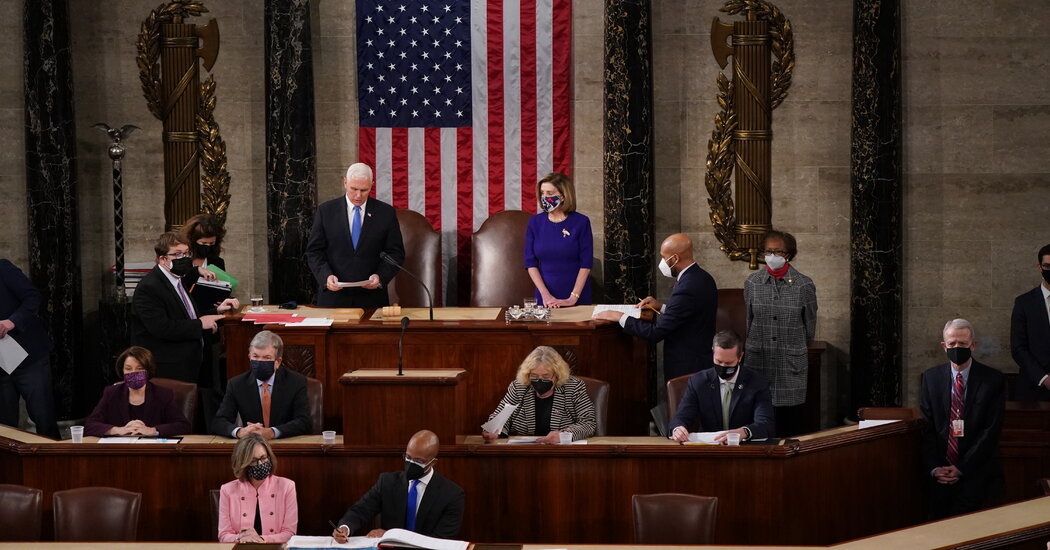 A joint session of Congress convened on Wednesday for what was expected to be a marathon session on Wednesday to formalize President-elect Joseph R. Biden Jr.’s Electoral College victory, in which Republicans loyal to President Trump plan to object to the results of at least three battleground states the Democrat won.

Both chambers are prepared to meet late into the night, with bipartisan majorities expected to beat back the challenges and confirm Mr. Biden as the winner. But by using the proceeding as a forum for trying to subvert a democratic election, Mr. Trump and his allies were going where no party has since the Reconstruction era of the 19th century, when Congress bargained over the presidency.

Protesters called by Mr. Trump to make a final stand swarmed through the streets around that Capitol and throughout Washington, egged on by the president to try to overturn Mr. Biden’s win.

“We will never give up. We will never concede. It doesn’t happen,” Mr. Trump told a gathering of die-hard fans at the Ellipse behind the White House.

Their challenges were all but certain to fail, but they will prompt many hours of debate and culminate in at least three votes that have already badly divided the Republican Party. The effort will force lawmakers to go on the record either siding with the president or upholding the results of a democratic election.

Lawmakers anticipated possible objections for up to three additional states — Michigan, Nevada and Wisconsin — although it was not clear whether they would draw the requisite backing from a member of both the House and the Senate to be considered.

Despite a remarkable pressure campaign by Mr. Trump to unilaterally throw out states that supported Mr. Biden, Vice President Mike Pence, who is presiding over the session as the president of the Senate, said just before the session began that he did not believe doing so was constitutional and would exercise his duties as his predecessors had.

The outcome, after for years of loyal support for the president, risked his political standing in a party Mr. Trump still dominates.

“It is my considered judgment that my oath to support and defend the Constitution constrains me from claiming unilateral authority to determine which electoral votes should be counted and which should not,” he wrote in a letter.

Even before it began, the session was already driving sharp wedges into the Republican Party that threatened to do lasting damage to its cohesion, as lawmakers decided to cast their lot with Mr. Trump or the Constitution. Top party leaders in the House and Senate appeared to be headed for a high-profile split. And while only a dozen or so senators were expected to vote to reject the outcome in key states, as many as 70 percent of House Republicans could join the effort, stoking the dangerous belief of tens of millions of voters that Mr. Biden was elected illegitimately.

On Wednesday, Mr. Biden addressed the certification in a statement.

“After the past four years, after the election, and after today’s election certification proceedings on the Hill, it’s time to turn the page,” he said. “The American people demand action and they want unity. I am more optimistic than I ever have been that we can deliver both.”

Difference between recovered and active COVID-19 cases increases to 1,32,912; recovery rate stands at...

Imanbek, a 19-Year-Old From Kazakhstan, Made ‘Roses’ a Hit