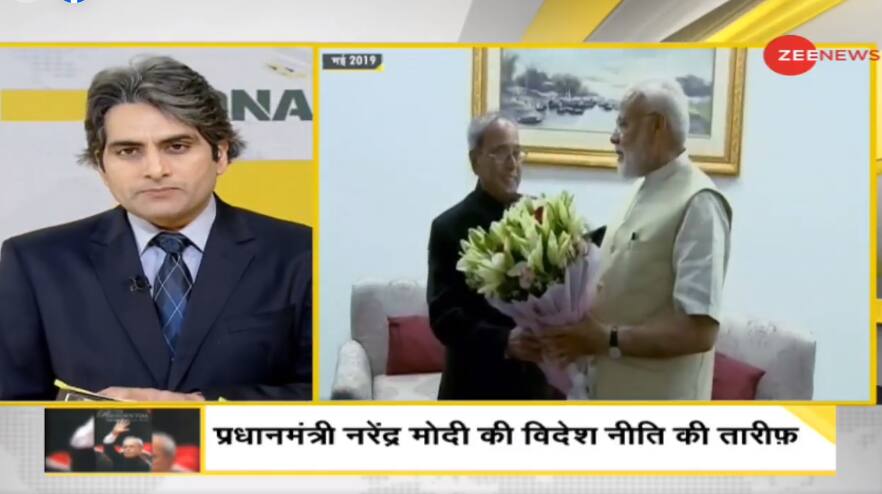 The 197-page book, which was released on Tuesday (January 5), contains 11 CHAPTERS, elucidating many big decisions and events in the country in five years. The DNA report will tell you about Pranab Mukherjee’s key observations.

The book on pages 20 and 21 raises questions on the leadership of Congress President Sonia Gandhi, who Pranab Mukherjee believes failed to handle the party affairs properly. Since Dr Manmohan Singh stayed away from the House for a long time, the MPs lost contact with the party.  Pranab further writes that the party leadership could not show its skill in difficult times, and Sonia Gandhi also failed to tackle Maharashtra’s leadership crisis.

About the 2014 general elections, Pranab Mukherjee writes that people expressed their trust in Prime Minister Narendra Modi but it cannot be denied that Congress could not meet the people’s expectations. He further writes about the feedback given by Congress and BJP leaders.

“There is no escaping the fact that the Congress had failed miserably to fulfill people’s expectations and aspirations. In fact, after the campaign, when all the formalities were complete, several important Congress leaders and ministers met me at Rashtrapati Bhavan for various reasons. Interestingly, none of them expected a clear majority for either the Congress or the UPA combine.”

Congress leaders predicted no coalition to get a majority. Leaders of the opposition were also not convinced about the BJP’s victory. Only Piyush Goyal was the only leader who said that the BJP would get an absolute majority. He also wrote that he wasn’t sure of the numbers and massive mandate of the BJP before the 2014 elections but was impressed seeing the planning and hard work of Modi.

“Only Piyush Goyal, the then national treasurer of the party and now a cabinet minister, was confident that the BJP would get no less than 265 seats, and that the number could go up to 280. I didn’t and still don’t know the reasons for his optimism. However, I took him seriously when he gave me Modi’s detailed electioneering schedule, which was not only grueling but also painstaking,” Pranab said.

Pranab Mukherjee also appreciated Narendra Modi for the quick grasp of the nuances of foreign policy. He writes, “When Narendra Modi took over as PM, he had absolutely no experience in foreign affairs. As the CM of Gujarat, he had visited some countries, but those visits were limited to engaging for the good of his state and had little to do with domestic or global foreign policies. Foreign policy was, therefore, truly uncharted territory for him.”

“But he did what no PM had attempted before: invite the heads of government/state of SAARC nations to his oath-taking ceremony in 2014 – and this included Pakistan’s then PM, Nawaz Sharif. His out-of-the-box initiative took several foreign policy veterans by surprise,” he adds. Pranab, however, termed Modi’s visit to Lahore to Nawaz Sharif as unnecessary.

“Modi then sought my advice on his intent to invite all the heads of state/government of the South Asian Association for Regional Cooperation (SAARC) countries for the swearing-in ceremony. I complimented him on the idea and advised him to discuss the same with the head of the Intelligence Bureau, owing to the enormous security risks facing leaders of Afghanistan, Pakistan, and Sri Lanka. I have had very cordial relations with PM Modi during my tenure. However, I did not hesitate to give my advice on matters of the policy during our meetings. There were several occasions when he echoed concerns that I had voiced. I also believe that he has managed to grasp the nuances of foreign policy quickly,” Mukherjee says in the book.

About demonetization, Pranab writes on page number 156 that on November 8, 2016 demonetization was implemented in the country, and Prime Minister Modi was criticized for not consulting the President, and also not informing leaders of the opposition parties. In the book, however, Pranab Mukherjee appreciated the secrecy observed in this matter.

The book has interesting information on page number 157. In the 1970s, he writes to have advised the then Prime Minister Indira Gandhi for demonetization, but she did not accept his suggestion.

After the Congress’ defeat in the 2014 Lok Sabha elections, the party started losing elections in the states as well. The Congress held EVMs responsible for the continuous defeat. He also writes that when the opposition parties submitted a memorandum about the rigging in EVMs, he dismissed such allegations.

Former president Pranab Mukherjee has also advised Prime Minister Narendra Modi on page number 9 of the book. He writes that PM Modi should learn from the former prime ministers, and spend more time in Parliament for its proper functioning. The Prime Minister is also advised that the voice of dissent must be heard.

Bihar assembly election 2020: Here`s why the polls this time will be unique

State of the Race, as Told by Ads