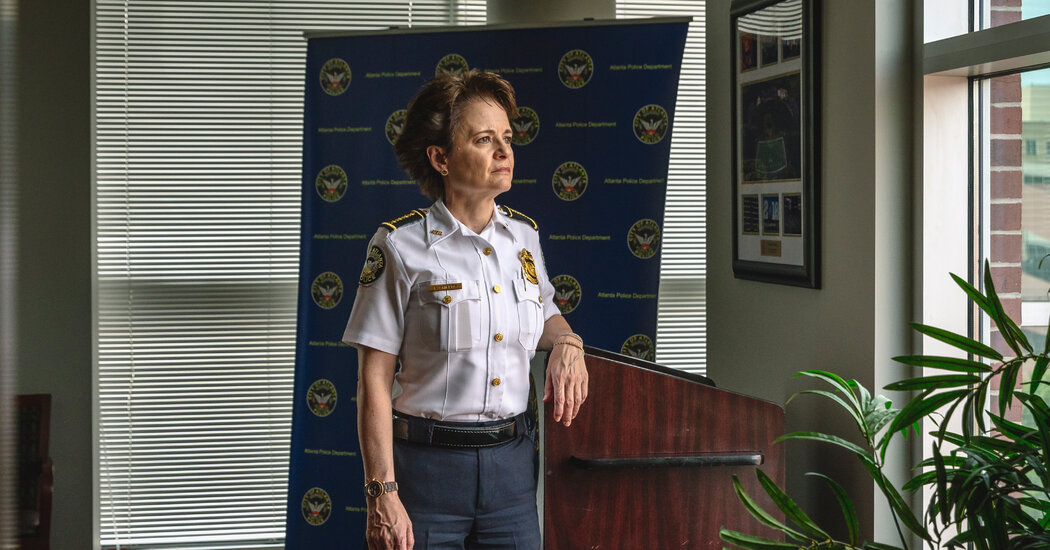 LOUISVILLE, Ky. — The Atlanta police chief who resigned last year after a high-profile police shooting has been hired to run the department in Louisville, Ky., a city still reeling from its own prominent shooting that helped fuel the outcry for police reform that became a defining factor of 2020.

The incoming chief, Erika Shields, will become the fourth police chief to lead the Louisville Metro Police Department since the death of Breonna Taylor in March, Mayor Greg Fischer announced on Wednesday. She will replace the city’s interim chief, Yvette Gentry, when she is sworn in on Jan. 19.

Ms. Shields will arrive in a city rife with racial tension that ballooned with the killing of Ms. Taylor and subsequent protests, which drew thousands of people this summer and fall. Much of the anger surrounding Ms. Taylor’s death is still evident in Louisville today, nine months later, and activists said they will ramp up demonstrations in an effort to reinforce their demands for a transformation in the police force.

“Erika is definitely coming into chaos,” said Milly Martin, a political and social activist in Louisville. “Hopefully she can handle it.”

Ms. Shields served as Atlanta’s police chief for three and a half years, but resigned two days after a police officer shot and killed Rayshard Brooks, a 27-year-old Black man, in June. Officers had responded to a call reporting that Mr. Brooks was asleep in his car in a Wendy’s parking lot.

After 40 minutes of questioning and sobriety tests, the officers tried to arrest Mr. Brooks, who hit one officer, took another one’s Taser, fired it and then ran. One of the officers, Garrett Rolfe, pulled out a handgun and fired at Mr. Brooks as he fled, striking him twice in the back.

Prosecutors said that Mr. Rolfe then kicked Mr. Brooks as he lay dying, while another officer stood by. Neither of the two officers rendered first aid for more than two minutes.

Officials fired Mr. Rolfe and charged him with murder and aggravated assault within a week of the shooting. His case is awaiting trial.

Ms. Shields resigned the same day that Mr. Rolfe was fired, saying in a statement at the time that she was stepping down “out of a deep and abiding love for this city and this department.”

She now comes to a city that is still dealing with an even more prominent police shooting — that of Ms. Taylor, who was killed during a raid on her apartment in March.

No officers have been charged for Ms. Taylor’s death. One officer, Brett Hankison, faces charges of endangering Ms. Taylor’s neighbors when he shot into their apartment. The Police Department announced last week that two other officers would also be fired for their roles in the deadly raid.

In death, Ms. Taylor became an international icon for renewed calls to reform police departments and hold officers accountable when they commit unnecessary violence. That is especially apparent in Louisville, where fallout from the deadly raid continues to reverberate through the city. Protesters, though fewer in number than during the summer and fall, still occupy a public square in her honor downtown, and public officials continue to clamor for reforms and accountability measures that they complain have been slow to come.

Ms. Martin, the political activist, said she was disappointed that officials appointed Ms. Shields, who was asked to resign by the Atlanta chapter of the N.A.A.C.P. following the killing of Mr. Brooks.

“I just don’t see how she’s going to be a good fit for Louisville,” Ms. Martin said. “As the Black community, why would we want a woman like Erika Shields coming to our city to be the next police chief when clearly, clearly she could not get Atlanta P.D. under control?”

Atlanta had several police shootings while Ms. Shields served as chief, some of them leading to reforms.

None of the officers were wearing body cameras, and the shooting remains under investigation, according to The Atlanta Journal-Constitution.

In response, Ms. Shields announced that the Police Department would cease to partner with the F.B.I., the Drug Enforcement Administration or U.S. Marshals Service because those agencies do not wear body cameras.

Ms. Shields, Atlanta’s second female chief and its first openly gay one, also won some support among progressives when she met with protesters who took to the streets after the killing of George Floyd by the police in Minneapolis in May.

“I thought the way she waded out into the crowds to try and better understand the pain and worry that people were feeling in Atlanta last summer was really admirable,” said Matt Westmoreland, a Democratic City Councilman in Atlanta.

Robert Friedmann, professor emeritus of criminal justice at Georgia State University, said some of Ms. Shields’s ability to succeed in Louisville would depend on Mayor Fischer and the Metro City Council, and whether those elected officials would give the new chief the freedom to enact changes as she sees fit.

“If the mayor will not disrupt her position and her job, Louisville will be lucky to have her,” Mr. Friedmann said, adding that police chiefs often come under substantial political pressures, particularly after high-profile shootings and during periods of high crime rates.

Like many cities, Louisville experienced a sharp increase in homicides and other crimes last year. The Louisville Metro Police Department logged 173 homicides in 2020, more than the previous two years combined.

Chris Wells, a Louisville activist who attended a meeting on Tuesday to promote a truce between the city’s feuding gangs, said he doubted that someone from outside Louisville could come in and correct the myriad problems that only worsened for the city’s Black residents in 2020.

The selection process leading up to Wednesday’s announcement has unfolded in secrecy, and Mr. Fischer had declined to discuss the selection committee’s deliberations. City officials faced public criticism for not releasing the list of finalists before making a selection, in view of the calls for increased transparency in the wake of Ms. Taylor’s death.

“We were not given a choice,” said Attica Scott, a state representative from Louisville who participated in several racial justice demonstrations. “We weren’t engaged as partners, we weren’t engaged as community — activists, protesters and leaders have been left out.”

Gerald Griggs, the second vice president of the Atlanta chapter of the N.A.A.C.P., said that despite some reform efforts, Ms. Shields was ultimately unsuccessful in preventing unnecessary acts of police violence. He said the death of Mr. Brooks was “the straw that broke the camel’s back.”

“To hear that now she’s going to one of the epicenters of the issues around police brutality is disheartening,” Mr. Griggs said. “I think it’s a bad decision. I like her as a person, but as an administrator of a police force, she’s been unable to curtail the activity that gives rise to police brutality.”

He added that activists in Atlanta “have a kindred spirit with Louisville because we understand what it’s like to lose a member of the community,” and that Ms. Shields “can expect activists from Atlanta to be in Louisville — we want to hold her accountable.”

How the Pandemic Has Affected Passports, Global Entry, T.S.A. PreCheck and More

A Million Jobs Lost: A ‘Heart Attack’ for the N.Y.C. Economy

In Trumpworld, the Grown-Ups in the Room All Left, and Got Book Deals