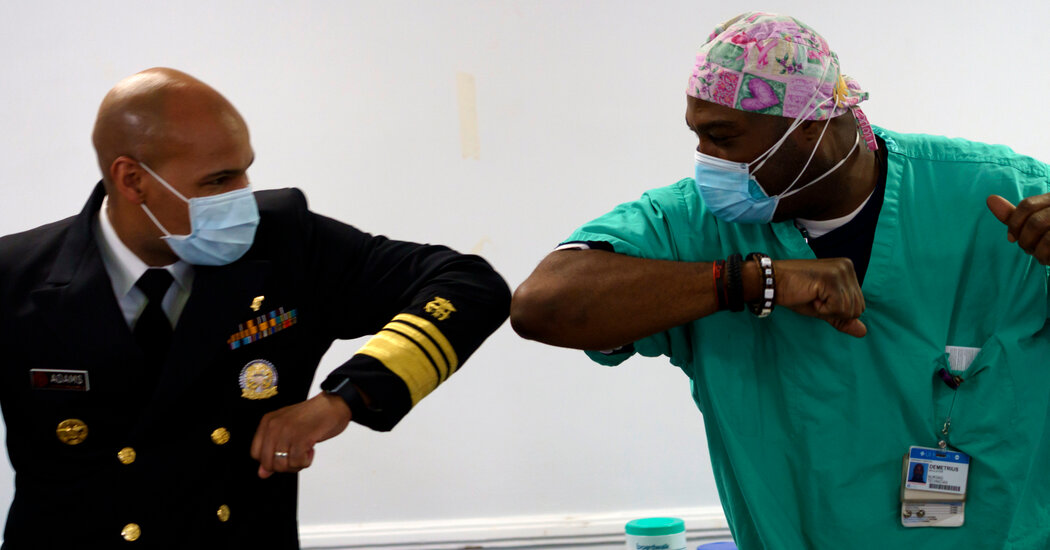 Acknowledging that coronavirus vaccination around the United States was going slowly, Dr. Jerome Adams, the surgeon general, urged the states on Tuesday not to stick rigidly to the Centers for Disease Control and Prevention guidelines about whom to vaccinate first.

If fewer health care workers are agreeing to be vaccinated, he said, states should “move quickly to other priority groups,” such as people older than 75 and essential workers.

“The problem really is that we need to continue to do a better job of matching up supply and demand at the local level,” he said.

An advisory committee to the C.D.C. recommended last month that nursing home residents and health care workers who are especially at risk of being exposed to the virus should be the first group (“1a”) to get the vaccine, followed by other people 75 and older and certain other essential workers (“1b”). The C.D.C. endorsed and published the recommendations, but they are not binding. Each state sets its own priority list, with some following the federal guidelines exactly and others not.

Some states, like Texas and Florida, have already begun offering shots to people 65 and older who are not nursing home residents, and to those of any age with medical conditions that raise their risk of dying if they contract Covid-19.

Dr. Adams said in some cases, health officials “feel beholden” to the C.D.C. priority recommendations, resulting in a lot of vaccine sitting unused in freezers.

An effort to have the C.V.S. and Walgreens drugstore chains manage the vaccination of most nursing home residents and employees around the country has been slow to get off the ground. And anecdotally, health care workers are turning down the vaccine, sometimes in large numbers.

Asked about Dr. Adams’s remarks, a spokeswoman for the C.D.C. said the agency had made clear in written guidance that states did not need to vaccinate everyone in a priority group before moving on to the next group.

But some officials, including Gov. Andrew M. Cuomo of New York, have said poor execution by hospitals is largely to blame for the slow start. Mr. Cuomo, for one, is resisting calls to start offering shots to lower-priority groups just yet.

Immigrants Say They Were Pressured Into Unneeded Surgeries