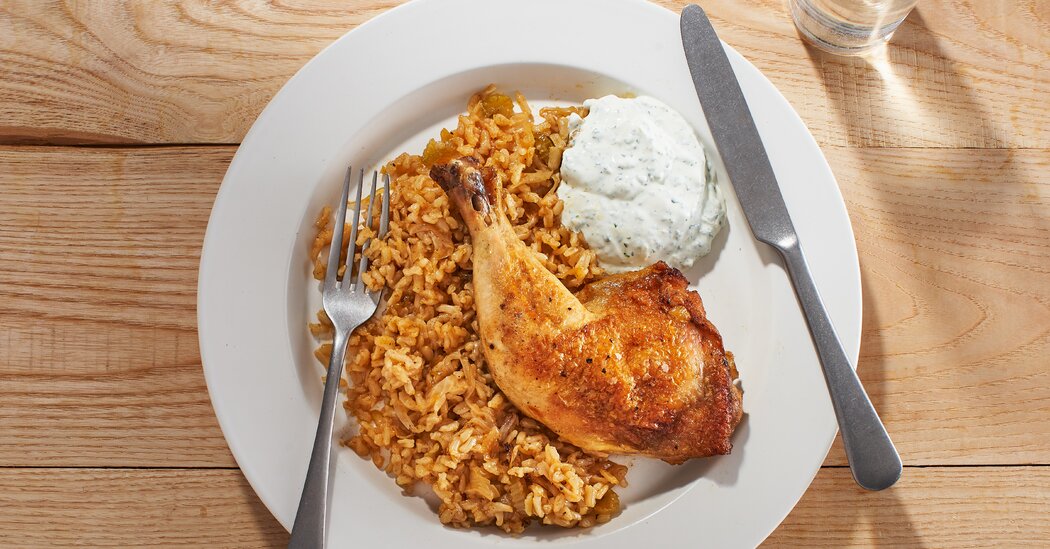 For the past few years, there has been a cookbook on my shelf whose pages I keep returning to: “Cooking Outside the Box,” a slim volume of recipes by people incarcerated in Michigan state prisons. Only recently did I realize it’s because I’m searching for all the things it doesn’t explain. Measurements, when they are used, involve sporkfuls, packages and bags. Instructions appear using an ID card to slice a pickle. The word “cook” always refers to using a microwave. Reading recipes for dishes like Lynda’s Pizza Rolls and Cass’s Noodle Cookie, I kept hoping for head notes and back stories. Who figured out how to turn crushed Doritos and hot water into masa for tamales? I’ve rarely been as impressed as I’ve been by these portraits of ingenuity, born of the utmost constraints.

I couldn’t interview those cooks, but I reached out to Earlonne Woods, the charismatic co-host and co-producer of the “Ear Hustle” podcast, because I wanted to get a sense of cooking for yourself in prison. Woods, who was first incarcerated at 17 and spent seven of his 27 years in prison at San Quentin, told me his favorite dish was chicken and rice, which he looked forward to making most weeks. “On Sundays, they would serve this roast-chicken hind quarter,” he said. “But if you’ve got the kitchen hookup, you can get it raw.”

Woods, now 49, went on to describe preparing the chicken every week in his hot pot with salt, pepper and a bouillon cube. “Or if I didn’t have one, I’d tear open some chicken Top Ramen and use the seasoning packet,” he explained. “My mission was always to boil it for one hour until I knew it was really done.” Then he’d use that flavorful broth to cook some instant brown rice. Finally, he’d garnish the dish with some cilantro — if he could get his hands on some. “I’d only cooked for myself once before,” Woods said, “but the first time I made that chicken and rice, I felt like Chef Earlonne.”

Woods has been free for the past two years, ever since his sentence was commuted by Gov. Jerry Brown. I asked whether, after all those Sundays, chicken and rice still holds its charm for him. “Oh, yeah,” he responded enthusiastically, going on to describe a 10-pound bag of chicken he bought and froze after moving into his apartment. “I thawed the whole thing so I could cook one leg and was going to put the rest back in the freezer, but when my friend heard me mention it, she told me, ‘Uh-uh, boo boo, you can’t freeze that no more.’” With no other choice, he turned on his oven and every burner on his stove, filled every pan and baking dish he had with chicken and got it all cooked so that it wouldn’t spoil. “That was a lot of chicken,” he said.

After our conversation, I asked Woods if he’d like a cooking lesson in the form of an updated recipe. He accepted, and I set out to create a simple, flavorful one-pan version of the dish. My goal was to tuck several bits of kitchen wisdom into a single recipe for Woods, who had told me that he never really learned to cook. First, by browning the chicken and then cooking it over a bed of aromatics with liquid, he’d learn to braise — something he could do with practically any other cut of dark meat or dense vegetable. Second, I wanted to amplify Woods’s own excellent instinct to enrich the liquid for his chicken with seasonings and then use that broth to cook the rice. Inspired by Woods’s seasoning packets, I made a mixture I called “Earlonne spice,” using smoked paprika, coriander and cayenne, along with dried garlic and onion. Together with a simple base of onions, celery and bay, the mix fortified the homemade chicken broth, ensuring the rice would be savory and satisfying.

Each time I made it, the dish filled my cold kitchen with the sort of home-​warming aromas I wanted Woods to enjoy. Prison dehumanizes the incarcerated in part by denying them so many of the sensory experiences of life, including the small, essential delights we take for granted when we cook — the scent of onions cooking in butter or chicken broth simmering away on the stove. I hoped cooking the chicken might return some of this to Woods.

As Woods tried his hand at the dish, he sent me updates and questions, sometimes working out an answer for himself over the course of a voice mail message. I could tell he took cooking seriously, but I’m not convinced the recipe had quite as romantic an effect on him. Though in the most important ways, it was a success: He was learning, but still letting his instincts guide him, improvising his way to dinner with pans that weren’t quite big enough and an oven that wasn’t quite hot enough. And then he sent me a video that I think made him as proud as it made me: a friend’s clearing his plate and exclaiming, “You put your foot in it!” Earlonne told me he’d be using this chicken recipe from now on.

The Border War in Portland