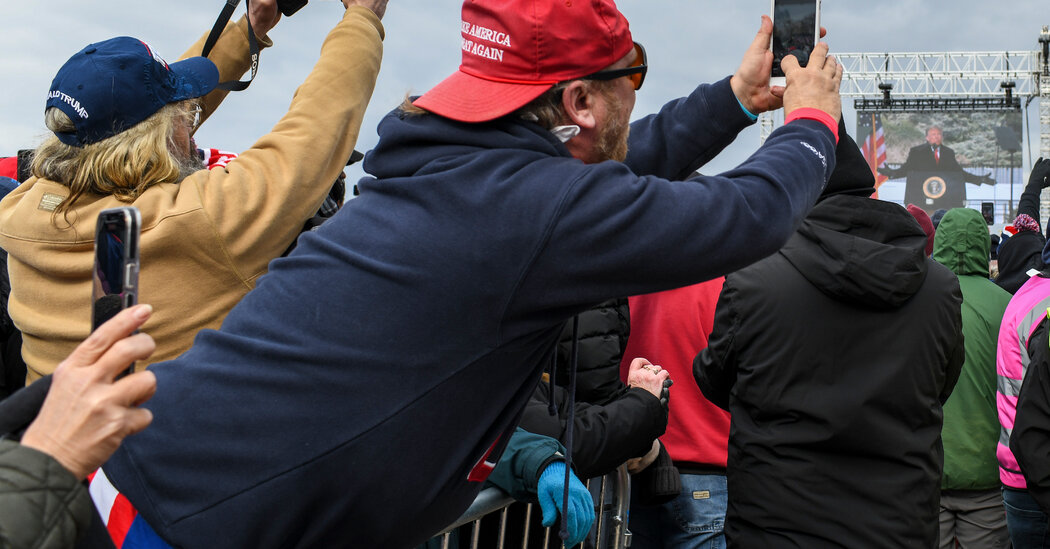 Under a dreary winter sky, defiant but downbeat Trump supporters began gathering in downtown Washington on Wednesday morning to celebrate a defeated Republican president who suffered a final humiliation in the Georgia Senate runoffs with one declared Democratic victory and the second race with the Democratic candidate maintaining his lead.

Crowds of supporters holding Trump flags marched down the streets of Washington to the elliptical park just behind the White House, where President Trump was set to speak in the late morning from a large grandstand that had been erected. As Congress prepared to conduct the final count of Electoral College votes, the scene outside the walls of Capitol Hill this week reflected the desperation within a White House resisting the transition of power.

“Some of the people here, maybe they’re willing to say Trump lost if things don’t go the way we want them to today,” said Kevin Malone, 43, who drove from Rome, Ga., through the night with two friends, arriving in D.C. looking like they had not slept. “That’s not us. We can’t lose this country. If the Democrats win, there’s not going to be another fair, legal election in this country. We won’t have a democracy.”

He said he and his friends from Northwest Georgia, now represented by Representative Marjorie Taylor Greene, a QAnon-supporter, were on the fence about coming but decided to leave shortly before 11 p.m. Tuesday when it “started looking like the Democrats were going to steal another election.”

Some of the more than 300 National Guard troops called up for the week stood in camouflage by white vans on Wednesday morning. Rows of local police were stationed on Black Lives Matter Plaza, in front of Lafayette Square after scuffles broke out Tuesday night between pro-Trump demonstrators and local police who deployed pepper spray to quell the unrest.

Tensions briefly rose at the plaza Wednesday around 10:45 a.m. Eastern as a counter-protester standing near police barricades waved for Trump supporters to move along while shouting, “Goodbye, thanks for visiting!” One man in a group of about a half dozen Trump supporters shouted back “Oh, don’t worry. We’ll be back.”

By Tuesday night, the Metropolitan Police Department recorded arrests of five people on charges of assault and weapons possession, including one person who was charged with assaulting a police officer.

Mr. Trump’s false claims of election fraud and promotion of the rallies on Wednesday have encouraged some of his more staunch allies and supporters to travel the country for Wednesday’s rally. The White House had hoped for 30,000 people but aides feared the turnout may be far smaller.

“We are considering this a day that will change history,” said Kevin Haag, 67, who drove about nine hours from his home in Lake Santeetlah, N.C. on Tuesday to participate in the rally. “We are excited.”

He said the road from North Carolina to Washington was dotted with cars and trucks flying Trump flags and American flags, a sign, he said, that the rally would be well-attended. The lobby of his hotel was filled with rally goers, including Proud Boys, with “their Kevlar and boots have a whole belt full of tasers and you name it,” he said.

But he was not necessarily optimistic that Mr. Trump or his Republican allies would prevail in their efforts to overturn the election. Instead, Mr. Haag said he was hopeful that he and his friends would get some kind of closure on Wednesday. He had planned to come with a number of people, but some had to work, and others said they were worried about what might happen in Washington. His wife stayed home with a migraine. In the end there were only three of them that made the trip.

“I think the truth will be made known,” he said. “Even if the truth is, the election went the other way,” he said, meaning if Mr. Trump had lost, “we have to hear that. If it’s over, it’s over.”

How to Judge the Booker Prize in a Pandemic