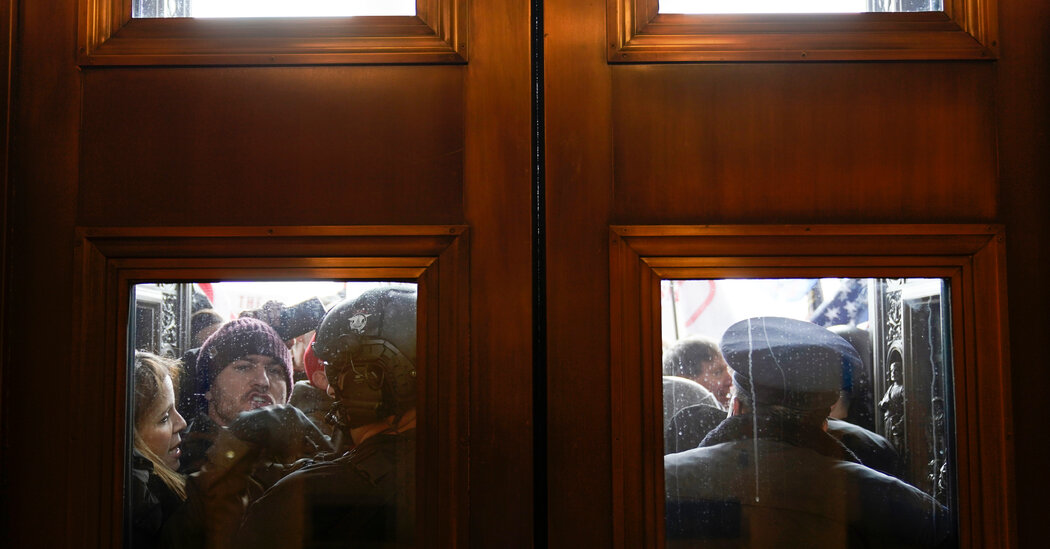 Governors across the country condemned angry mobs of President Trump’s supporters who stormed the Capitol on Wednesday, and called on the president to publicly denounce their actions.

Gov. Mike DeWine of Ohio issued a statement reprimanding those who had incited the violence.

“This is an embarrassment to our country,” Mr. DeWine, a Republican, said. “This must stop immediately. The President should call for the demonstrators to leave our Capitol Building.”

Governors — both Republicans and Democrats — used similarly vehement language, issuing blistering statements denouncing the tumult and calling for a peaceful transition of power.

In Michigan, leaders from both parties issued a single statement. Gov. Gretchen Whitmer, a Democrat, and Rick Snyder, her Republican predecessor, urged the public to come together.

“While we come from different backgrounds and political parties, Governor Whitmer and I share a deep love for our country,” Mr. Snyder said. “We must always remember that we are Americans first, and we are not one another’s enemy. That’s why I join with Governor Whitmer in calling on people of goodwill across America to pray for peace, calm, and healing.”

In the statement, Ms. Whitmer said that now was the time to “put this election behind us once and for all.”

“Let’s move forward together, as one United States of America,” she said.

Gov. Doug Ducey of Arizona, a Republican, said on Twitter that the scene at the Capitol was “wrong,” and “has no place in our form of government.”

“All should denounce, and it should end now,” he wrote.

In West Virginia, Gov. Jim Justice, a Republican, called the clashes “absolutely unacceptable.” Gov. Asa Hutchinson of Arkansas, also a Republican, described the people invading the Capitol as “reprehensible.” In Florida, Gov. Ron DeSantis, a Republican, said, “Violence or rioting of any kind is unacceptable and the perpetrators must face the full weight of the law.”

Governors of states near the Capitol sent law enforcement to help the local police regain control. At the request of Mayor Muriel Bowser of Washington, Gov. Ralph Northam of Virginia sent state troopers and members of the Virginia National Guard.

“All Americans should be outraged by this attack on our nation’s Capitol,” Mr. Hogan wrote on Twitter. “This is a heinous and violent assault on the heart of our democracy. I will not stand for this, and neither should any American.”

In California, Gov. Gavin Newsom, a Democrat, canceled a news briefing on Covid-19 “out of an abundance of caution” to ensure the safety of his staff as demonstrations took places in several state capitals.

“What we are witnessing in our nation’s Capitol building is reprehensible and an outright assault to our democracy and Democratic institutions,” Mr. Newsom said.

Some governors, including Charlie Baker, a Republican from Massachusetts, pointedly blamed President Trump for the chaotic scene. Mr. Baker said that the situation was a “sad but predictable outcome” of the president’s attacks on the validity and outcome of the November election.

“These baseless challenges to President-elect Biden’s victory must stop,” he wrote on Twitter.

Gov. Michelle Lujan Grisham of New Mexico, a Democrat, said: “The president of the United States has stoked this anti-democracy sentiment. He has fanned flames of hatred and violence.”

Britain Offers a Plan for Jobs, but Braces for a Wave of Layoffs