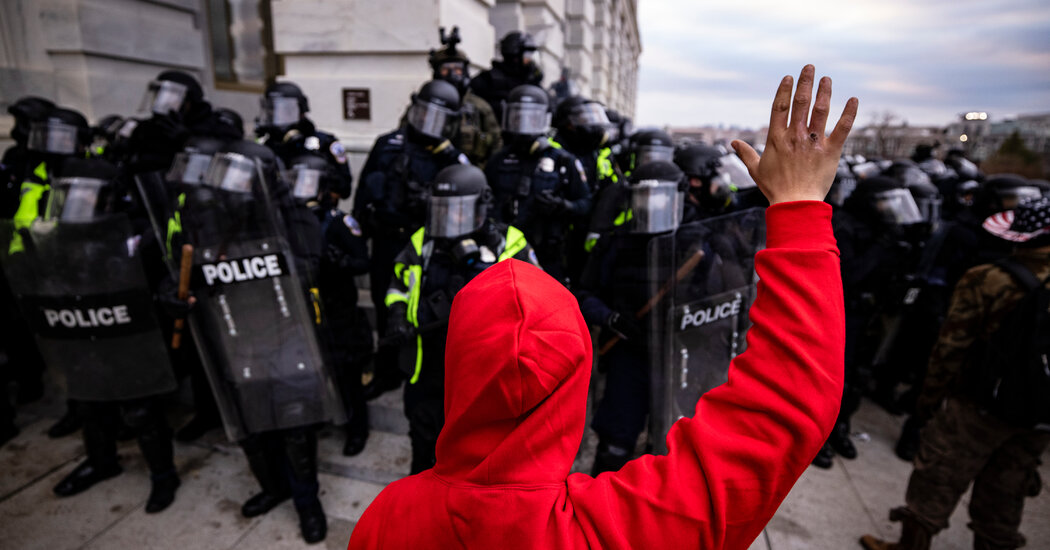 During the protests after the killing of George Floyd in May, President Trump vowed to “dominate” demonstrators, calling them “extremists” and “thugs,” while federal agents deployed tear gas and swept people into unmarked vans.

Peaceful protesters in Lafayette Square were suddenly met with flash grenades and chemical spray and rushed by police officers in riot gear to clear the way for President Trump to pose with a Bible in front of St. John’s Church.

Mr. Trump said that anyone who breached a security fence outside the White House would encounter “the most vicious dogs, and most ominous weapons, I have ever seen.”

The tone, and the initial law enforcement response, were strikingly different on Wednesday as a lawless and destructive mob of his supporters stormed the Capitol and disrupted the counting of the Electoral College votes. One video appeared to show Capitol Police officers moving aside barriers and retreating as the mob flooded through.

Inside the Capitol, an officer pleaded with a man in a green backpack, saying, “You guys just need to go outside.” When asked why they weren’t expelling the protesters, the officer said, “We’ve just got to let them do their thing now.”

A flood of commentary followed, with many noting that the mob appeared to be largely white and insisting that they would have been treated far more harshly had they been Black or protesting racism.

Ivanka Trump called the rioters “American patriots” while urging them to stop the violence, in a tweet she later deleted. Her brother, Donald Trump Jr., said, “This is wrong and not who we are,” adding, “Don’t start acting like the other side.”

In a video posted hours after the attack on the Capitol began, President Trump repeated the false claim that the election had been stolen, adding “but you have to go home now.” He added, “We love you.”

Biden is campaigning in Nevada and Trump held a ‘virtual rally’ on Limbaugh’s show.