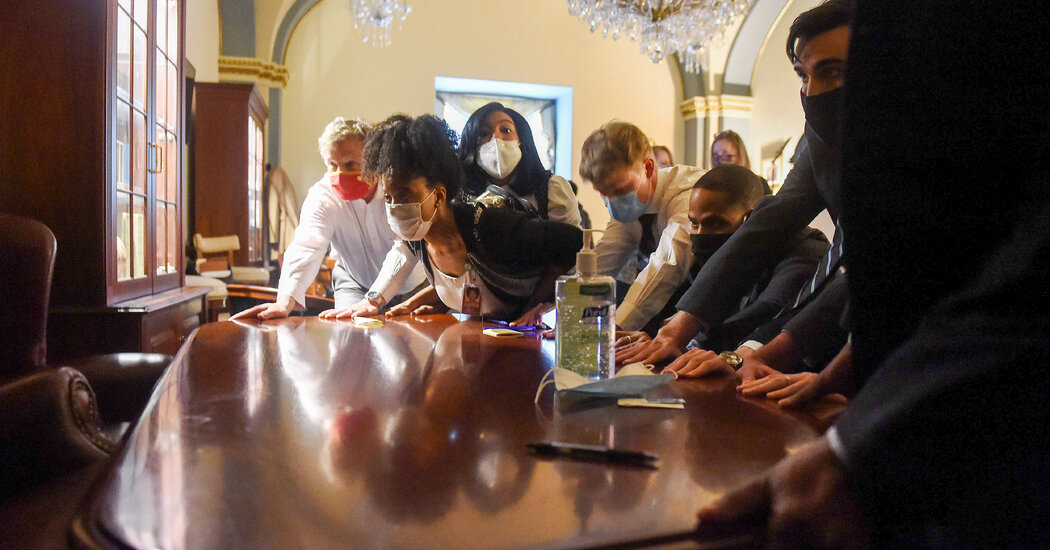 The Trump supporters pressed through police barricades, broke windows and battered their way with metal poles through entrances to the Capitol. Then, stunningly, they breached the “People’s House” itself, forcing masked police officers to draw their guns to keep the insurgents off the chamber floor.

“I thought we’d have to fight our way out,” said Representative Jason Crow, Democrat of Colorado and a former Army Ranger in Iraq, who found himself captive in the House chamber.

An armed standoff ensued in the House chamber, with police officers drawing their weapons. A pro-Trump extremist casually monkeyed around at the dais of the Senate. Intruders in Speaker Nancy Pelosi’s suite overturned desks and smashed photos. Others ripped artwork in Senate hideaway offices.

“This is what the president has caused today, this insurrection,” Senator Mitt Romney, Republican of Utah, said as he and other senators were hustled off to a secure location.

Some protesters gawked at the grand and storied building they had flooded while others looked at it with contempt.

“I don’t trust any of these people,” said Eric Martin, 49, a woodworker from Charleston, S.C., as he marveled at the opulence of the Capitol and helped a friend wash pepper spray from his eyes. “Absolute power corrupts absolutely.”

But if some only stared at the Capitol, others resorted to violence. A woman inside the building was shot and later died, the District of Columbia police said, and multiple officers were injured. Two explosive devices were found around noon near the headquarters of the Republican National Committee, then destroyed by a bomb squad. And the federal authorities arrested a 70-year-old man from Alabama near the Capitol in possession of a firearm and materials to make several Molotov cocktails.

By Wednesday evening, the scene outside the Capitol had calmed, after Capitol Police, supplemented by F.B.I. agents and Department of Homeland Security officers with members of the National Guard on their way, squeezed pro-Trump extremists from every corner of the building to the majestic Rotunda, then persuaded them to leave.