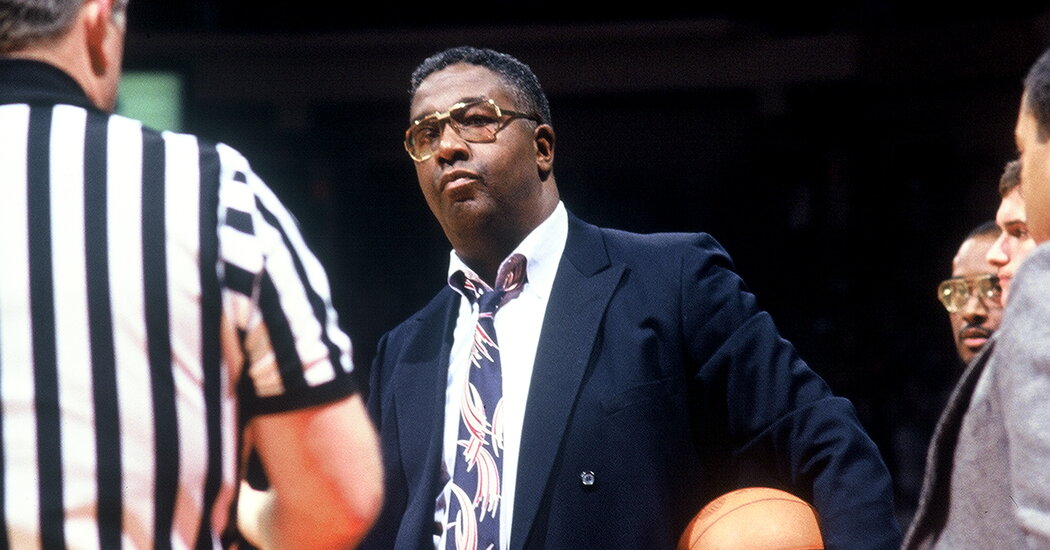 By the time he summoned Rayful Edmond to a meeting on an autumn afternoon in 1988, the Legend of John Thompson was already large. He was the Black coach of the Black college basketball team that was equal parts athletic and cultural force. On the court, Thompson taught his Georgetown Hoyas to play swarming, suffocating defense. Off the court, he hounded his players — who were among the few Black students at Georgetown — to go to class, keeping a deflated basketball in his office to remind them that their athletic careers would eventually come to an end. He brooked no dissent. If an opponent threw an elbow, he didn’t necessarily object to his players responding with a punch. When a reporter asked him how it felt to be the first Black college basketball coach to win a national championship, he replied that the question was insulting because it assumed other Black coaches hadn’t been talented enough to win it all. Standing 6-foot-10 with a booming voice and an urban dictionary’s worth of curse words, Thompson inspired a potent mixture of fear and respect in players, coaches, referees, journalists, professors — even drug kingpins.

Edmond, at the tender age of 23, was the biggest crack cocaine dealer in Washington, D.C. His gang made as much as $2 million a week in sales and was linked to as many as 30 murders. Edmond was also a big Georgetown basketball fan. When Thompson learned that Edmond was palling around with two of his players, he told them to stay away from the drug dealer. Then Thompson put out word on the street that he wanted to talk to Edmond himself. Edmond dutifully showed up at Thompson’s office, where the coach delivered the same no-contact message. Edmond promised to abide by it. Several months later, after Edmond was arrested on a 39-count federal indictment, Thompson went on ABC’s “Nightline” and told Ted Koppel about the encounter. That’s when the Legend of John Thompson — the basketball coach who got in the face of an infamous drug dealer and told him to keep the hell away from his program — grew even larger.

But in his posthumous autobiography, “I Came as a Shadow,” Thompson, who died at the age of 78 in August, lets a little air out of that legend, or at least tries to put a different spin on it. “A myth has grown about me threatening Rayful and ordering him to stay away from my players,” Thompson writes. “I’ve always been offended when some people assume our interaction had a physical component.” What actually happened, Thompson reports, is that he reasoned with Edmond and appealed to the drug dealer’s better angels. “I thought of Rayful as my neighbor’s child, who was exposing my kids to some trouble. I wanted to protect my players, my university and myself. The conversation was between two Black men from Washington who both loved basketball, respected each other as human beings and had enough intelligence to work out a solution to our problem.” His confrontation with Edmond, Thompson concludes, “was less than what everybody said, and also more.”

In “I Came as a Shadow,” Thompson — who was long wary of revealing too much about himself and yet was continually frustrated about being misunderstood — finally gets to cast his legend on his own terms, in all of its contradictions. He was someone whose job was to win basketball games, and who relished his ability to do so, but was “paranoid about being acknowledged too much as a coach.” He liked to remind his players that “far more money is made sitting down than standing up” — and would interrupt practice to deliver a two-hour lecture about the legacies of Martin Luther King Jr. and Malcolm X — but he “resented being portrayed as some kind of social worker.” Thompson writes, “I didn’t want to be equal to the white man, I wanted to kick his ass.” In his autobiography, he demonstrates that his legend was less than what it was made out to be, and also more — much more.

Despite Crises, India Fixes Its Gaze on a Bollywood Tragedy