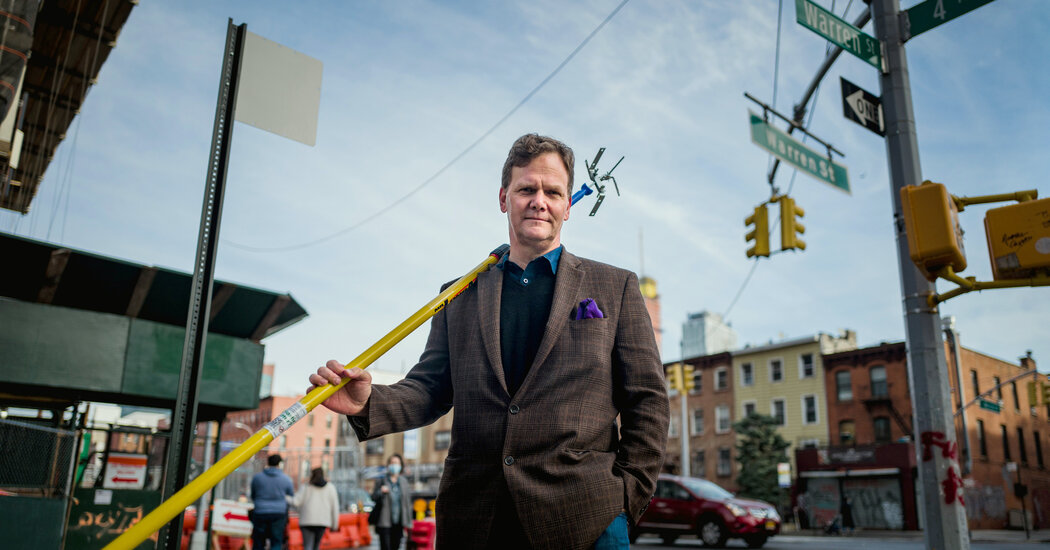 Captain Ahab hurled his harpoon at the Great White Whale. Don Quixote tilted at windmills with his lance. Taylor Mali, a poet in Brooklyn, has become known for wielding a long and pointy weapon at city treetops.

His quest began two years ago, after his wife, Rachel, looked upon the Bradford pear tree out the window of their Carroll Gardens apartment. She found her view marred by a plastic deli bag caught in its bare branches. Dutifully, Mr. Mali went to the Home Depot and bought a yellow metal painter’s pole that could extend to 21 feet. Within minutes of his return, he had managed to tug down the trash and earn some husbandly karma.

In possession of a $50 pole and with no ceilings to paint, he began yanking down other derelict plastic bags stuck in trees around the neighborhood. “I had made my wife happy, so my day was made,” he recalled. “I decided to see if I could make someone else’s, too.”

So began the legend of the Plastic Bagman and the Snatchelator.

Mr. Mali modified his equipment, adding some L-brackets for more snagging capacity, which turned it into “something like a spear with an awkward sprangle of metal pieces at the end” — this is the Snatchelator. He also gave himself an alter ego: the Plastic Bagman.

Six months ago, with New York emerging from its first lockdown, he began offering his services to those who needed them, advertising on his website, his Instagram account and through some magnetic business cards that he sticks up on lampposts and hands out to neighbors.

For no charge (though donations for new equipment are welcome), he will travel across his own neighborhood, plus Cobble Hill, Red Hook, Gowanus and Boerum Hill. He will sometimes venture beyond this zone, as when he grabbed a bag for a desperate would-be client in Dumbo who offered to make a $200 donation to the charity of his choice (Planned Parenthood).

On a warm December morning, Mr. Mali found himself staring up at a defiant deli bag on Warren Street. He had driven over with the Snatchelator lodged between the seats of his Tesla Model X, and the procedure was over in less than a minute: a quick extension of the pole, a jab of the metal braces, a delicate twist like the wrapping of a strand of spaghetti around a fork. A rustle of dead leaves, and victory. A tiny branch came down, too, and Mr. Mali murmured a quick “Sorry” to the tree.

“The greatest and worst thing about plastic,” Mr. Mali noted, “is that it won’t biodegrade in a thousand years. People think, If I don’t do something about it, I’ll see that for the rest of my life.”

He is not the first to launch a grudge war against aerial garbage: Back in 2004, The New Yorker writer Ian Frazier detailed his own crusade, but Mr. Mali says he started bag-grabbing before he found out about the article. He averages about five or six appointments a month, with a higher rate in winter, since bare branches impale more bags.

He estimates that he has “a 99 percent success rate, as long as they’re within reach.” When asked if he keeps them as trophies, he laughed. “I wear them on my belt to scare away other bags,” he said. He has also pulled down sneakers, an errant garden umbrella and a number of Mylar balloons.

Heather Mitchell, a TV writer and producer who lives on Hoyt Street, contacted Mr. Mali after being annoyed for more than a year by a black garbage bag trapped in a Callery pear tree in front of her townhouse. “It was hideous,” she said. “We watched it shred and waste away until it was a ghost of itself.” She heard about Mr. Mali from Pardon Me for Asking, a local blog. She made an appointment and was amazed at how quickly he came and pulled it down.

On the way to such an engagement, Mr. Mali will often stop to take down other random bags. Sometimes he works with the help of two small assistants, his 5-year-old son and 3-year-old daughter. He enjoys the attention he gets from spectators, as when he recently received an unexpected ovation from a crowd in Carroll Park, but most of the time he does his work unheralded, alone.

Mr. Mali, 55, is no stranger to quixotic missions. During the 1990s he worked as a middle-school teacher, but then he resolved to attempt the near-impossible: “I decided to see if I could make a living as a traveling poet.” This was not as irrational as it might sound. After all, he had been one of the featured performers on the HBO show known as “Def Poetry Jam,” and he was a member of four National Poetry Slam-winning teams. (He has also had some success doing commercial voice-overs, and he financed the down payment on his first New York apartment by doing a series of ads for Burger King.)

Since the year 2000, he has made a career out of giving poetry readings, lectures and workshops, which he has delivered in every American state, he said, except Wyoming, as well as some 60 foreign countries. He has published five books of poetry and a volume of essays titled “What Teachers Make: In Praise of the Greatest Job in the World.”

In his spare time, he continues his mission: ridding urban trees of garbage. Though New York City has outlawed some plastic shopping bags, he still has plenty of work to do; he noted that some types are still exempt, and “there’s no ban on Mylar balloons.”

On a recent Sunday afternoon, as he prepared to do combat with a foe fluttering high in a London plane tree on Hicks Street, he offered a quote from the philosopher Edmund Burke: “Nobody made a greater mistake than he who did nothing because he could only do a little.”

The Long Battle Over ‘Gone With the Wind’

Brooks Brothers to be acquired for $325 million.