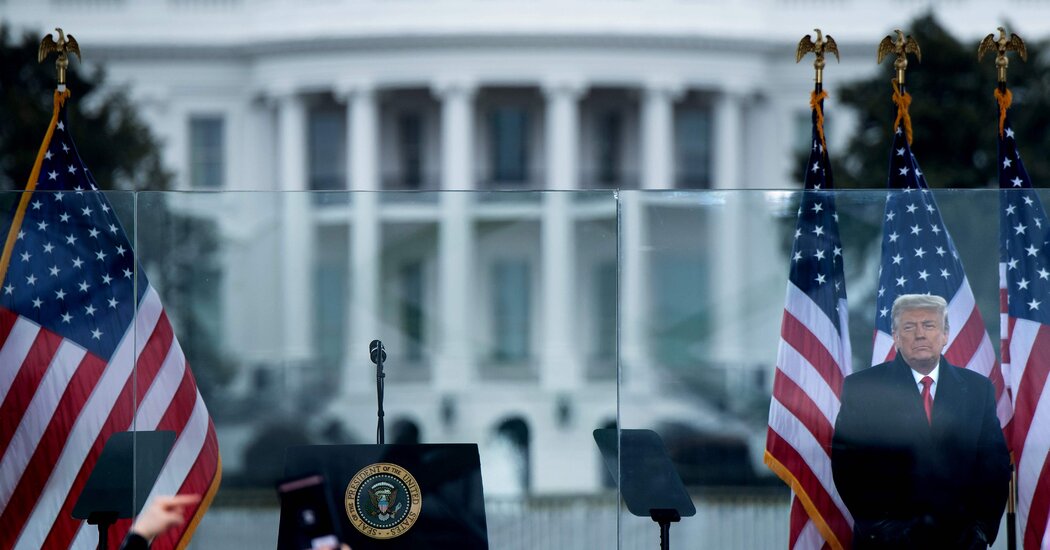 Donald Trump’s worst nightmare has come true: He’s going to be remembered by history as the Biggest Loser.

Think about it. He lost the election. Then he threw his energy into the campaigns of two Senate candidates in Georgia, both of whom lost. Then he returned to Washington, where his supporters delayed the certification of the election with a thug-like assault on the nation’s capitol.

When the first horrific videos showed Trump throngs storming the suddenly evacuated Senate, the president of the United States responded with “stay peaceful.” Which is certainly good advice, but hardly of the emotional intensity he uses when howling about himself.

“We had an election that was stolen from us,” he added. “It was a landslide election and everyone knows it. Especially the other side.”

You see now that within a couple of sentences, Trump has managed to turn his call for calm with a couple of jabs that would tend to convince some people that breaking through the windows and doors of the nation’s capitol was an excellent and righteous plan.

All this happened while Congress was attempting to certify the election of Joe Biden, a normally feel-good ritual that, as Chuck Schumer noted, was turned into “an act of political courage.”

While we never thought of Trump as a guy who’d bring us together, his post-election behavior has been so appalling that most of the Senate found itself in a kind of bipartisan revulsion.

“I’ve served 36 years in the Senate. This will be the most important vote I’ve ever cast,” said Mitch McConnell as he prepared to support the certification of Biden’s victory.

Even Mike Pence refused to do his bidding. Trump, listening to the advice of allies like Rudy Giuliani, was convinced that the vice president had “the absolute right” to throw out the election results. (“If Mike Pence does the right thing, we win the election.”) Pence thought otherwise. Not totally clear whether his opinion was really based on constitutional law or a vision of four years more of White House meetings with his current boss.

Some of the Republicans, of course, were raring to get on the Trump bandwagon. We have to take a moment here to mention Senator Ted Cruz’s contribution in demanding an official audit of the election before anything else could happen.

Cruz reminded his colleagues that was exactly what happened after the controversial election of 1876, adding that recent polling shows that 39 percent of Americans believe the election “was rigged.” This is a reasonable rationale if you want to base major decisions about a presidential election on “recent polling” and the fate of Rutherford B. Hayes.

Trump is apparently incapable of doing anything but claiming he won. Over and over again. “Big difference between losing and … having it stolen,” he told a crowd in Georgia this week. “We win every state, and they’re gonna have this guy be president?”

The Georgia elections were a kind of prelude to Wednesday’s disaster. Trump was in theory there to help two Republican candidates in their big Senate campaigns. But he was absolutely useless except when it came to tooting his own horn.

“I’ve had two elections. I won both of them. It’s amazing,” he told one crowd, before launching into an attack on Georgia’s “incompetent governor” and “crazy secretary of state,” both of whom happen to be Republicans.

And the Republicans lost in Georgia, making Democrats the Senate majority. It’s not clear that Trump could have helped the cause if he’d been a slightly more selfless campaigner. But his I-was-robbed message was certainly not the one you’d send to encourage voters to go to the polls.

“I mean I could go on and on. … I could just go on forever,” Trump said in another I-won speech in front of the White House. Damned straight. It’s becoming increasingly clear that he is probably going to spend the rest of his life explaining how he actually won re-election “in a landslide.”

Be thankful you’re not one of the family or Mar-a-Lago regulars. Thanksgiving dinners will probably feature a half-hour disquisition on the Arizona vote, and the distribution of gifts at Christmas will be a reminder that some people don’t get the rewards they really deserve.

Things are tough in America right now, but in a couple of weeks he’ll be out of the White House. At least we have something Trump-related to look forward to.

Dense fog delays several flights, trains to and from Delhi