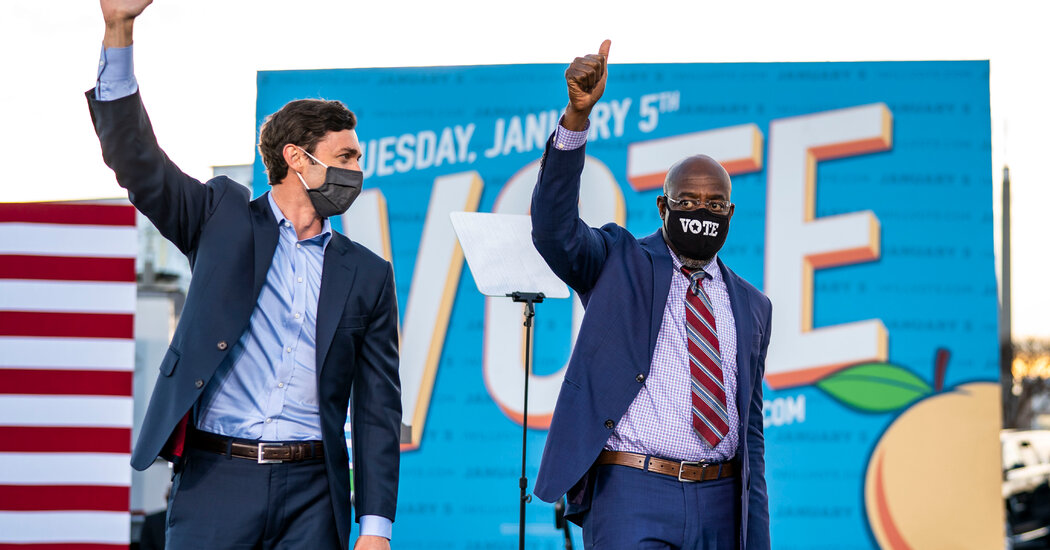 Democrats gained control of the Senate on Wednesday by winning both of Georgia’s runoff races, an electoral repudiation of President Trump that will give the incoming Democratic administration broader policy latitude even as the victory was temporarily overshadowed by the violent Trump supporters storming the United States Capitol in the name of the ousted incumbent.

The election of the Rev. Raphael Warnock and Jon Ossoff was a political triumph for the Democratic Party in a state that has stymied it for decades. It was also a jarring split-screen encapsulation of the politics of progress and grievance that have defined Mr. Trump’s administration and the changing country he is sworn to serve.

Mr. Warnock’s own Twitter feed showed how quickly the mood among Democrats had shifted. At 1:55 p.m. Eastern, he toasted his victory by thanking Georgia voters, saying he was “forever grateful.” Within two hours, he was quoting another pastor of Ebenezer Baptist Church — the Rev. Dr. Martin Luther King Jr. — with a message of togetherness in the face of hatred and bigotry.

Georgia has not sent a Democrat to the Senate in two decades, and the party succeeded this year by focusing heavily on voter registration and turnout, particularly in suburban counties and in Atlanta and Savannah. It was a strategy engineered in part by Stacey Abrams, the former state House leader and candidate for governor, who has focused on combating voter suppression in the state.

Biden Keeps Focus on the Future as Trump Is Impeached Again

David Lee Roth Is Letting His Art (Mostly) Do the Talking

‘No Slavery in Australia’? These Pacific Islanders Tell a Different Story

How Are Students Getting Through the Semester?