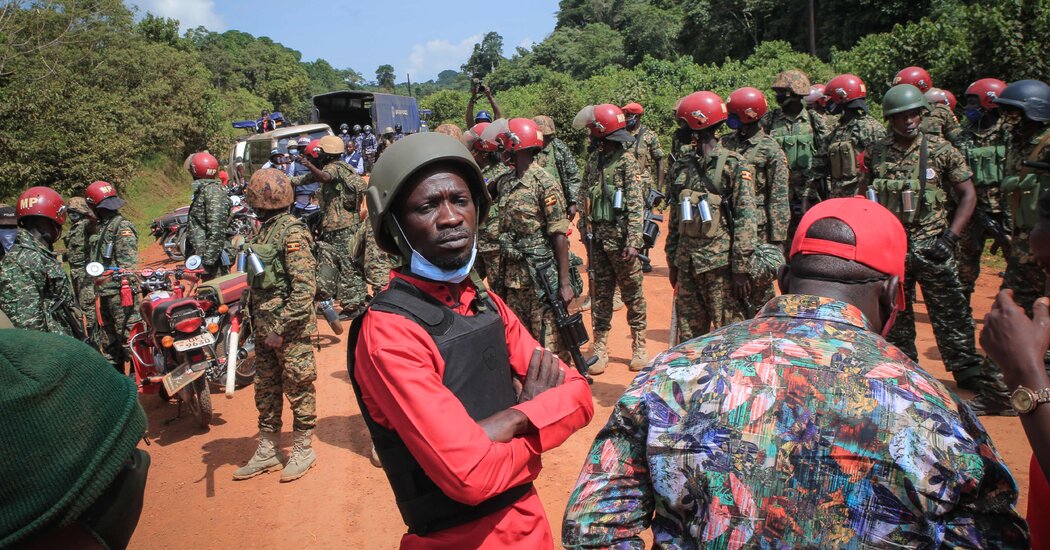 NAIROBI, Kenya — Uganda’s leading opposition figure has filed a complaint with the International Criminal Court against the country’s president and nine security officials, accusing them of authorizing a wave of violence and human rights abuses that has intensified in the run-up to next week’s general election.

The complaint, filed in The Hague on Thursday by the opposition leader, Bobi Wine, also accused the Ugandan government of incitement to murder, the abuse of protesters, and arrests and beatings of political figures and human rights lawyers. Mr. Wine, a popular musician-turned-lawmaker, said the government of President Yoweri Museveni had not only subjected him to arrests and beatings, but had also tried to kill him, beginning in 2018.

Mr. Wine, 38, is the leading contender among 10 candidates trying to unseat Mr. Museveni, who has ruled Uganda, a landlocked nation in East Africa, since 1986. Mr. Museveni, though once credited with bringing stability to the country, has in recent years been accused of subverting civil liberties, muzzling the press and stifling dissent.

Mr. Museveni, 76, is campaigning for his sixth term in office, after signing a law in 2018 scrapping the age limit for presidential candidates, which had been 75. He is largely expected to win the upcoming vote. Political analysts say that he faces a fragmented opposition, and he won plaudits for championing infrastructure projects — from new factories to hospitals and roads. He has also capitalized on the notion that his government has handled the pandemic competently; Uganda has reported only 290 coronavirus-related deaths.

Mr. Wine and others have faced the wrath of authorities in recent years, but the clampdown has intensified as the election, scheduled for Jan. 14, has neared. While Mr. Museveni has been allowed to hold campaign events, the government has broken up or impeded rallies held by his opponents, saying these events violate rules intended to prevent the spread of the coronavirus.

The crackdown on nationwide protests has led to the deaths of at least 54 people, and the arrest of hundreds, according to authorities.

Joining Mr. Wine in the complaint filed to the International Criminal Court were Francis Zaake, an opposition lawmaker who said he had been assaulted by security forces, and Amos Katumba, the chairman of a local nongovernmental organization who fled to the United States after he said he had been arrested and tortured.

“I am glad that we are able to raise a case against General Museveni and his other generals and the people that he’s using to massacre the people of Uganda,” Mr. Wine, using Mr. Museveni’s full military rank, said in an online news conference on Thursday.

A government spokesman did not respond to a text message seeking comment.

While Mr. Wine was speaking to the news media on Thursday, security officers thronged the vehicle he was inside, setting off tear gas and firing shots.

Wearing a helmet and flak jacket, Mr. Wine, a performer whose real name is Robert Kyagulanyi, said he “expected a live bullet targeted at me any time.”

The court filing came hours after Mr. Wine said security officers had waylaid him on the campaign trail and arrested all 23 members of his campaign team. He also said he had received information that his children would be kidnapped, prompting him to send them out of the country.

Mr. Wine’s attempts to campaign have been repeatedly interrupted. On Nov. 3, just after submitting their nomination papers, he and another candidate, Patrick Amuriat, were detained by the police. In mid-November, Mr. Wine was arrested on accusations that his rallies breached coronavirus rules — inciting the protests across the country that resulted in deaths, injuries and arrests. After he was denied access to his family and lawyers for two days, Mr. Wine was charged and released on bail.

In recent weeks, authorities have also arrested civil society activists, including the prominent human rights lawyer Nicholas Opiyo who was held on money laundering charges. Police officers have also harassed and beaten journalists, according to the Committee to Protect Journalists (C.P.J.), and deported a news crew with the Canadian Broadcasting Corporation.

“What we’ve seen since November is incredibly worrying and shocking,” Muthoki Mumo, the C.P.J. sub-Saharan Africa representative, said in an interview. “It’s just unabated violence against journalists. It has become downright dangerous being a journalist reporting on the opposition during this election.”

Martin Okoth, the inspector general of police, said in a news conference on Friday that he would not apologize for the police beating journalists because the police were trying to protect them.

“We shall beat you for your own sake, to help you understand,” Mr. Okoth said, adding that journalists should not go to areas that the police deem unsafe or out of bounds.

The wave of arrests and intimidation has alarmed foreign embassies and human rights organizations, with a group of United Nations human rights experts calling on the government to cease the violence and create “an environment conducive to peaceful and transparent elections.”

The court has jurisdiction over allegations of genocide, war crimes, crimes against humanity and crimes of aggression. The prosecutor’s office confirmed in an email on Friday that they had received the brief and would review the allegations and inform the petitioners of the next steps.

Uganda is a party to the International Criminal Court and has sought the court’s help in arresting Joseph Kony, the leader of the Lord’s Resistance Army, who is wanted on 33 counts of war crimes and crimes against humanity. If it decides to accept Mr. Wine’s petition, the court would gather evidence by speaking to victims and witnesses and send investigators to collect testimony in areas where purported crimes took place.

Bruce Afran, the lawyer who filed the complaint on behalf of Mr. Wine, argued that the court would have jurisdiction because the complaint alleges an “extensive and repetitive pattern and practice of torture as to political figures and opposition figures.”

“One of the critical factors is the regular and routinized pattern of torture and abuse,” Mr. Afran said, asserting that it had become “Ugandan government policy.”

‘We Are Part of the Problem’

At Pentagon, Fears Grow That Trump Will Pull Military Into Election Unrest

‘A Slap in the Face’: The Pandemic Disrupts Young Oil Careers

U.N.C. at Chapel Hill to Move Online as Coronavirus Spreads