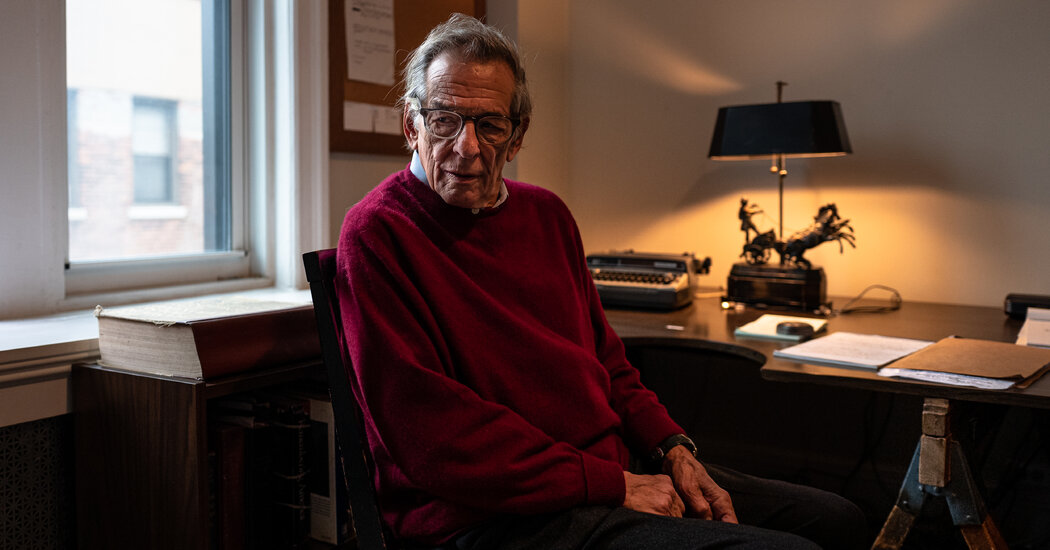 His desk is actually two combined, both modest. One he found left behind in an office he used to rent on West 57th Street. The other features a half-circle cutout that, like many things in Mr. Caro’s world, has a story behind it.

Nearly 50 years ago, when he was just beginning his research for “The Power Broker,” Mr. Caro badly injured his back while playing basketball. “We were totally broke, and I couldn’t sit up to write,” he said.

Taking a long shot, his wife, Ina, contacted Dr. Janet Travell, an expert in musculoskeletal pain who was President Kennedy’s personal physician. She is responsible for Kennedy’s use of a rocking chair, which became a symbol of his presidency.

Taking on the case, Dr. Travell — who also served as physician to Mr. Caro’s future subject, President Johnson — studied how Mr. Caro sat at his desk. She then devised a godsend of a solution: a semicircle cutout in the desktop that alleviates pressure on his back as he types.

Just as iconic, at least among the Caro-obsessed, is the Smith Corona Electra 210. The anachronism is an extension of the man, reflecting his desire to pin down elusive historical moments with strikes of keys against paper you can hold.

Mr. Caro has amassed 14 of these machines, which he cycles through a typewriter shop in Gramercy Park for maintenance and repair. He also found a man in Cleveland who agreed to make cotton typewriter ribbons — if he ordered in bulk. (He did.)

Under gentle questioning by Ms. Bach, Mr. Caro said that his favorite is on the desk, while a close second is at his home near Sag Harbor, on Long Island.

What’s a Palantir? The Tech Industry’s Next Big I.P.O.

Standing by his decision to impeach, Peter Meijer says he ‘may very well have’...