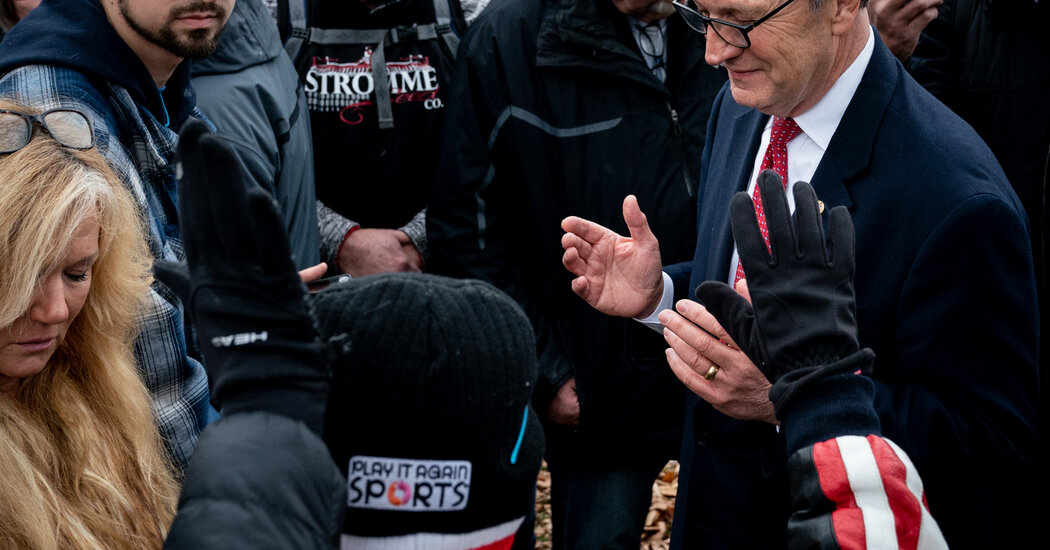 WASHINGTON — When a distraught constituent accosted her on Tuesday night at a restaurant in the nation’s capital, Representative Nancy Mace confronted an impossible task that sprang from President Trump’s false promises: getting them to understand why she and other Republicans in Congress could not simply overturn the results of the election.

Driven by Mr. Trump’s fictitious claims that the election had been stolen from him — and that lawmakers and Vice President Mike Pence could clinch him another four years in power during Congress’s official electoral count — the voter had come all the way from Ms. Mace’s home state of South Carolina to witness it. Now, the voter, shaking and in tears, demanded to know why Ms. Mace, a first-term congresswoman, had refused to join the effort.

Calm but firm, Ms. Mace tried to explain that it was not Congress’s role to subvert the results of an election — and that to do so would defy the Constitution.

“It didn’t matter what I said,” Ms. Mace said in an interview. “They didn’t believe it.”

Similar scenes — sometimes painful, always unresolvable — played out again and again in Washington this week in the hours before and after a violent mob urged on by Mr. Trump stormed the Capitol, as Republican voters loyal to the president cornered Republican lawmakers who voted to certify the election results, demanding answers and promising revenge.

The confrontations — and the scenes of mayhem that unfolded on Wednesday — have brought Republicans face to face with the consequences of their yearslong alliance with Mr. Trump, providing human evidence of the downside of his deep influence on the voters who form their party’s base.

It helps explain the searing anger that has prompted many Republicans to belatedly turn against Mr. Trump after years of enabling him and seeking his validation. But it also reflects the conundrum in which the Republican Party finds itself, beholden to voters who have internalized the president’s falsehoods and been emboldened by his divisive talk.

“Their hearts, minds and wallets were taken advantage of,” Ms. Mace said, her voice rising in fury. “Millions of people across the country who were lied to. These individuals, these hardworking Americans truly believe that the Congress can overturn the Electoral College.”

Many Republican members of Congress stoked that belief this week when they objected to Mr. Biden’s victory in battleground states and backed the challenges in votes that illustrated their party’s rift. In the House, more than half the Republicans, including the party’s top two leaders, voted in support of the challenges, while in the Senate, fewer than 10 Republicans did so and the leaders were vocally opposed.

The videos that emerged from the standoffs dramatized the yawning distance between elected Republicans in Washington who are increasingly desperate to peel away from the president and their constituents who say they will never let go.

On Friday, supporters of Mr. Trump swarmed Senator Lindsey Graham, Republican of South Carolina, at his gate at Ronald Reagan National Airport, calling him a “traitor.”

A similar scene unfolded Tuesday night in the Salt Lake City airport as Senator Mitt Romney, Republican of Utah, sat waiting to fly to Washington. A maskless woman approached and called him a “disgusting shame” for not standing with the president. Once on board, Mr. Romney was greeted by supporters of Mr. Trump chanting “Traitor!”

Some Republicans, like Senators Kevin Cramer of North Dakota and Todd Young of Indiana, both of whom voted to certify President-elect Joseph R. Biden Jr.’s victory, tried to reason with their constituents, working through their concerns point by point in scenes captured on video outside the Capitol.

But Mr. Cramer and Mr. Young could not persuade them that what the president and many of their Republican colleagues had told them was wrong — that there was no evidence of widespread fraud in the election, and no way for Congress to overturn the results.

“A vast majority of the people in this country are going to lose their faith in government” if Mr. Biden’s “fraudulent” victory was affirmed, an older man from North Dakota told Mr. Cramer on Tuesday, his face grave. “I am on the verge of doing that.”

By the end, neither side had budged, and there was nothing left to do, his constituents decided, but to pray for the country and for the senator.

“I was just very sad,” Mr. Cramer said later. “They think that there’s a remedy in this place for what ails them, and the reality is there’s not. They came all this way thinking that somehow, if they spoke loudly enough,” the results could change.

Mr. Cramer reasoned that like so many others, his constituents had “believed it because they wanted to believe” that the outcome could still be overturned. But he showed a flash of frustration, referring to his 12 Republican colleagues who had spearheaded the effort to challenge Mr. Biden’s victory, but would not “admit that it’s not going to be successful.”

“We have to be careful about what we make people believe is possible when we know it’s not,” Mr. Cramer said.

Ms. Mace said that she hoped that “the American people’s eyes might be open” after Wednesday’s violence, and that lawmakers, including in her own party, would be more aggressive in calling out falsehoods and dangerous language.

“I’ve been more vocal than ever in the last 24 hours, and I had no intention to,” Ms. Mace said. “But now is not the time to sit idly by and allow this to continue. It’s got to stop, and enough is enough.”

Whether Republican voters will listen, however, is a separate question. The throng of rioters at the Capitol on Wednesday included white supremacists, people carrying and wearing Confederate symbols, and many with “Q” paraphernalia signifying belief in the pro-Trump conspiracy movement QAnon that falsely holds that Mr. Trump is fighting a satanic cabal of Democratic pedophiles.

Before the mob rampaged through the Capitol on Wednesday, Mr. Young was confronted by a crowd wearing pro-Trump garb outside a Senate office building.

“You’re supposed to represent our opinion,” a woman plaintively told him.

“When it comes to the law, our opinions don’t matter — the law matters,” Mr. Young told her, in an exchange captured on video. “I value your opinion. I actually share your concerns. I share your conviction that President Trump should remain president. I share that conviction.”

“The law matters to us!” a man shot back as others chimed in. “It doesn’t matter to the Democrats.”

“I took oath under God — under God!” Mr. Young said, his voice shaking with emotion. “Don’t we still take that seriously in this country?”

Leon Black to Step Down as Apollo’s C.E.O. After Firm Finds More Payments to Jeffrey Epstein

The Fall Surge Is Here

Leon Black to Step Down as Apollo’s C.E.O. After Firm Finds...