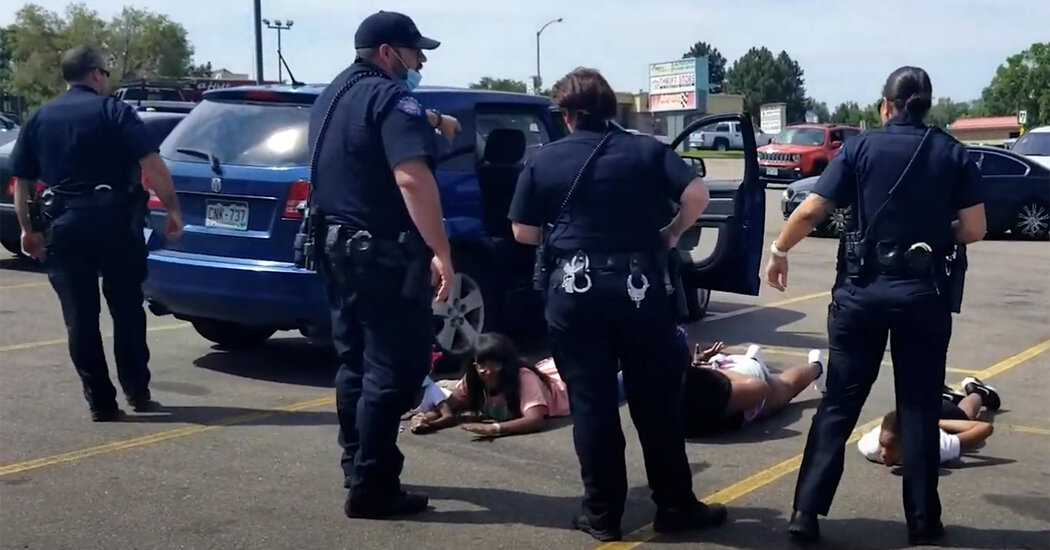 Prosecutors in Colorado said this week that they would not charge two police officers who drew their guns and handcuffed a Black family, including two girls, after suspecting them of riding in a stolen car.

The encounter with the Aurora police last August was recorded on a widely shared video that showed four children lying on the ground in a parking lot, crying and screaming as several officers stood over them by an S.U.V.

In a letter to the Aurora police chief on Thursday, a prosecutor said a review of police reports, body-worn camera videos, radio traffic and training materials as well as an outside “use of force” report had not found sufficient evidence to support filing criminal charges.

“Despite the disturbing fact that terrified children were ordered out of a vehicle at gunpoint and placed facedown on the ground, our conclusion is that there is not evidence beyond a reasonable doubt that the A.P.D. officers involved unlawfully, intentionally, knowingly, or negligently violated any Colorado criminal law,” wrote Clinton McKinzie, the chief deputy district attorney for the state’s 18th Judicial District.

David Lane, a lawyer for Brittney Gilliam, the Black mother who was detained along with her family in the encounter on Aug. 2, called the decision not to charge the officers involved “sadly unsurprising.”

“This is an America where white cops can put a 6-year-old child on the ground at gunpoint and face no consequences whatsoever — in other words, it is business as usual,” Mr. Lane said in an email. “When cops investigate cops it always works out very well for the cops.”

The decision came in the same week that Colorado’s attorney general, Phil Weiser, announced the opening of a grand jury investigation into another police encounter that has fueled outrage in Aurora and beyond — the death of Elijah McClain.

Mr. McClain, a 23-year-old Black man, died in August 2019 after the Aurora police restrained him with a chokehold that has since been banned.

In June, amid nationwide protests over police brutality, Gov. Jared Polis issued an executive order designating Mr. Weiser as the state’s prosecutor to investigate the case.

“Our investigation will be thorough, guided by the facts and law, and worthy of the public’s trust,” Mr. Weiser said in a statement on Friday. “In order to maintain the impartiality and integrity of the process, we have no further comment at this time.”

“Prosecutors are not required to use a grand jury and don’t in most cases, so we are forced to question whether this is yet another example of law enforcement being held to a different standard than every other person being investigated for murder,” Ms. Newman said on Friday.

Mr. McClain was walking home from a convenience store on Aug. 24, 2019, when someone called 911, saying he “looked sketchy” and was wearing a ski mask and waving his arms.

The police arrived, and after struggling to handcuff Mr. McClain, officers took him to the ground and used a carotid hold, which restricts blood to the brain to render someone unconscious. When medical responders arrived, after about 15 minutes, paramedics injected him with ketamine, a powerful sedative.

Mr. McClain went into cardiac arrest on the way to a hospital. He died a few days later.

“If the grand jury in Elijah McClain’s case doesn’t indict the officers and medics responsible for killing him, it will be because the attorney general’s office did not want charges to be brought,” Ms. Newman said. “That would be a grave injustice.”

In the episode involving the Black family in the parking lot, Ms. Gilliam had taken her nieces, younger sister and daughter to get their nails done. They were sitting in their car when the police arrived, Mr. Lane said.

Officers Darian Dasko and Madisen Moen of the Aurora Police Department believed the car to be stolen, based on information from a license plate reader, according to prosecutors.

They drew their weapons and ordered the family, including four girls ranging in age from 17 to 6, to lie face down on the pavement, as Ms. Gilliam protested that the car was not stolen. Ms. Gilliam and two of the older girls, ages 17 and 14, were handcuffed for about eight and a half minutes, as the younger children sobbed, prosecutors said.

The police eventually confirmed that the car was not stolen and released Ms. Gilliam and her family, who were “blameless” in the encounter, Mr. McKinzie wrote.

In a statement last August, Chief Vanessa Wilson of the Aurora Police Department said the officers had made a “mistake” and offered to provide therapy for the children “who may have been traumatized.”

The Aurora Police Department did not respond on Friday to requests for comment about the decision not to charge the officers in that matter, or the grand jury investigation into Mr. McClain’s death. There was no answer at phone numbers listed for Officers Dasko and Moen, and the police union did not respond to an email.

Mr. Lane, Ms. Gilliam’s lawyer, said he planned to file a civil rights lawsuit against the City of Aurora and the officers involved as early as next week.

He said that until each state empowered an independent agency to investigate police misconduct and bring prosecutions when warranted, “justice will never prevail and white cops will be able to continue to abuse citizens of color.”