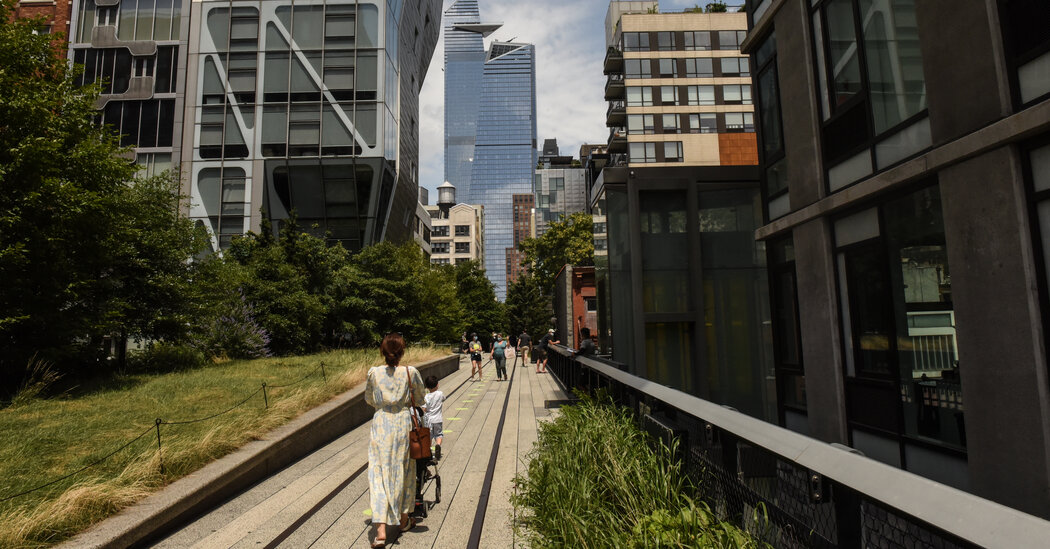 For more than a decade, the High Line, an elevated park that stretches for nearly a mile and half through the West Side of Lower Manhattan, has been a symbol of ambitious urban renewal: a sleek, tree-lined walkway created from an old run-down rail line that cuts through once-industrial neighborhoods.

Before the pandemic, it had become a major New York destination for residents and out-of-town visitors alike, drawing about eight million people in 2019.

And now, the park, which showed how the city could reinvent itself and reimagine decaying spaces, is to be expanded.

Gov. Andrew M. Cuomo said on Sunday that the High Line will be extended to connect to the newly opened Moynihan Train Hall, a project that he said help spur development in the surrounding neighborhoods and boost an economy facing a deep crisis because of the pandemic.

The new link, officials said, will provide an alternative way to access the new station, which serves Amtrak and the Long Island Railroad. It’s part of a broader package, including the new train hall and improvements sought for Pennsylvania Station, that seeks to improve the experience of taking mass transportation into and out of New York City.

“Traffic has reached impossible levels, and it’s never been efficient or effective,” Mr. Cuomo said in an interview. “But it’s clear that if the metropolitan area is going to grow, mass transit has to be better, safer, more pleasant, especially in this new world.”

A 1,200-foot elevated walkway will connect the existing High Line at 30th Street to a pedestrian path at Manhattan West, a mixed used development adjacent to the train hall.

State officials could not provide a specific timeline on when construction on the expansion would start or when they expected it to be complete.

The Moynihan station, which opened on Jan. 1 — a $1.6 billion building complete with over an acre of glass skylights, art installations and 92-foot-high ceilings — is just one in a series of ambitious infrastructure projects, including the Second Avenue Subway along the Upper East Side of Manhattan and a rebuilt La Guardia Airport, that the governor is seeking to make a prominent part of his legacy.

The state is also eyeing another possible expansion of the High Line to connect it north to Pier 76 on West 38th Street, where Mr. Cuomo wants to turn a Police Department tow pound into another park. The existing High Line travels 1.45 miles from 34th Street south to Gansevoort Street in the Meatpacking District.

But expanding the High Line raises questions about spending at a time when the state faces a major financial crisis. And the High Line, while a boon for the city, is an amenity that is little used by low-income residents and people of color.

Still, the governor believes the park’s growth is important to the city’s future.

Mr. Cuomo plans to formally announce the expansion on Monday during his State of the State address.

The High Line project started after two men — Joshua David, a writer, and Robert Hammond, a painter — met at a community board meeting in 1999 and discovered they shared an interest in saving a railroad trestle that had been out of commission since 1980 and was slated for demolition.

Construction began in 2006, and the first section, from Gansevoort Street to 20th Street, opened to the public in 2009. The third phase — what was then considered the final phase — opened in 2014, stretching the elevated walkway from 30th Street to 34th Street, looping around the Hudson Yards development.

The project has been celebrated worldwide, but it has also been expensive, with construction and maintenance almost exclusively financed through private funds. The most recent leg of construction cost $35 million. The first two sections of the High Line cost $152 million, city officials estimated.

State officials estimate the connector between the High Line and Moynihan Train Hall would cost about $60 million, though that figure could change.

Mr. Cuomo said one-third of it would be financed by the state; another third would come from Brookfield Properties, the developer of the mixed-use development next to the train hall; and the remainder would come from nonprofit groups and other private organizations.

Mr. Hammond, a founder of the Friends of the High Line, said the money had not yet been raised. He said he was skeptical at first about the new project. “I felt like the High Line is the High Line and it doesn’t need more,” he said. “Really what got me excited about it was it being this civic connector.”

Mr. Cuomo, acknowledging that the state was facing severe financial difficulties because of the pandemic, said that its portion of the cost would come from infrastructure funds that could not be used to help address budget shortfalls. He said the state was also expecting aid from the federal government for infrastructure projects after Joseph R. Biden Jr. becomes president.

The High Line has hastened a transformation in the West Side of Lower Manhattan, a part of the city that for decades was lined with working-class homes, light industrial business and storage facilities for clothes, meat and mail.

It has enchanted tourists and helped spur the development of luxury high-rise buildings.

A 2012 study from the New York City Economic Development Corporation said that between 2003 and 2011, property values near the park increased 103 percent.

But the park has also drawn criticism that it is contributing to the displacement of lower-income people and people of color living in the surrounding neighborhoods. Mr. Cuomo noted that there would be no displacement of actual buildings during the expansion.

One of the groups that has criticized the High Line is Save Chelsea, a coalition devoted to preserving the neighborhood’s character.

Pamela Wolff, Save Chelsea’s treasurer, who is 85 and has lived in Chelsea since 1956, said on Sunday that life in the neighborhood had changed greatly since the High Line opened.

She said that the High Line led to a constant crush of tourists and expensive new condominiums that priced out longtime residents.

“It has been difficult finding a way to live with that kind of influx into the community,” Ms. Wolff said.

As for the extension, Ms. Wolff said, “I don’t see why we would have strong objections to it,” as long as no historic structures were destroyed to build it.

Proponents of the expansion include Brad Hoylman, a state senator whose district includes the High Line. He said on Sunday that “to do it right is always going to be more expensive, but I think at the same time these are once-in-a-generation projects.”

Mr. Hoylman said that engaging with the community would be critical, as it had been since the park’s first development.

“I think the reason why the High Line was so successful is that it was created at the community level and had involvement by neighborhood stakeholders from day one, so we should most certainly replicate that model with this new connection,” Mr. Hoylman said.

Swiss to Vote on Paternity Leave: Nice to Have or Essential?

MDMA pills from France worth Rs 4 lakh with derogatory sign ‘ACAB’ seized in...

Japan Flooding Deaths Rise to 58, With More Rain on Horizon