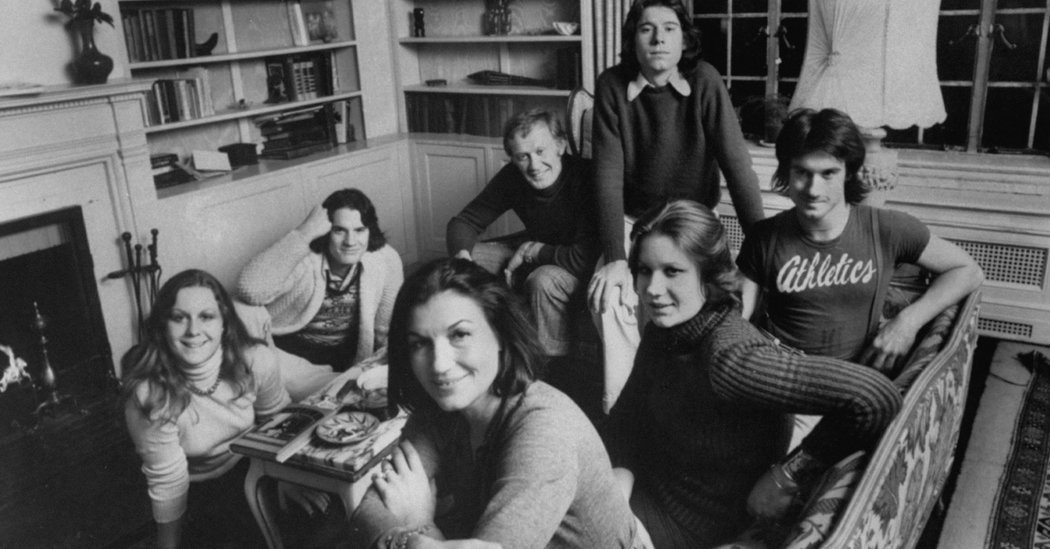 Before “The Real Housewives of Beverly Hills,” before the Kardashians, before the idea of living large and unscripted on camera became a TV staple, there was a startling program on public television called “An American Family” with a startling female character named Pat Loud.

Ms. Loud was a tan California mother of five. She drank, she plotted her divorce, she adored, and accepted, her openly gay son. She did it all in Santa Barbara and all on camera — in 1973. Hurt, angry, boisterous, sharp, witty, loving, resilient, she did not act like most women on television at the time. But she was, ostensibly, not acting at all. She was the first reality television star on the first reality show — and she paid a price for breaking new ground.

Critics called her vacuous, materialistic and self-absorbed. An “affluent zombie,” one said.

What wife and mother would do such a thing? Newsweek put Ms. Loud, her husband, Bill, and their children on its cover with the headline “The Broken Family.” Many others saw her as honest and brave, uninhibited and unconditional in her love for her children.

Ms. Loud died on Sunday at her home, her family said in a Facebook post. She was 94. She was 47 when the show that made her famous first aired, and she spent much of the rest of her life explaining why she did it and how it had changed her family. She made few apologies.

She told the talk show host Dick Cavett in no uncertain terms that she had no problem with her son Lance’s homosexuality. She wrote in her autobiography, “Pat Loud: A Woman’s Story” (1974), that, given how she felt that her family had been mistreated after the show aired, “Now we are all unabashedly trying to get anything we can from the instant fame.”

But life went on. Once a homemaker and Junior League volunteer, Ms. Loud found new work with Ron Bernstein, a literary agent, and later with the fashion designer Rudi Gernreich. She moved to New York, then England, before returning to California in the late 1990s to be with Lance after he became sick with H.I.V. in 1987. (He died of complications of hepatitis C in 2001.) She divorced her husband, though they reunited many years later.

By the time she was in her 80s, public perception had recast her from a tasteless self-promoter into a wise and refined matriarch of a genre gone astray.

Speaking of the “Real Housewives” franchise, she told The New York Times in 2013 “It just seems like all these beautiful blond girls, all made up, with stem glasses of white Chablis, and they’re all just fighting at dinner somewhere.”

Critics of “An American Family” accused it of being contrived, but the Louds long said they had behaved as normally as they could with cameras constantly trailing them. Craig Gilbert, a producer for WNET, chose the Louds for his subject because their family was large, with lots of children — and because they said yes.

The family expected the filming to last for weeks and doubted that the final product would find many viewers. In the end, more than 300 hours of film captured over seven months was reduced to 12 one-hour episodes.

“They just went for the sensational stuff,” Ms. Loud said.

The most sensational involved scenes from Lance Loud’s flamboyant life in New York — where he performed in a rock band and where his mother visited him, accompanied by cameras — and the breakup of the Louds’ marriage.

Bill Loud had been unfaithful for years, and his wife knew it. In one wine-saturated conversation captured on film, she complained about his affairs to her brother and sister-in-law. She told The Times in 2013 that she had been “coerced” into letting the scene be filmed. Mr. Gilbert rejected that assertion.

“I said, ‘Pat, we must shoot that,’” he told The Times in 2013. “She said, ‘I do not want you to.’ I said, ‘We must, Pat, because otherwise it’s going to come out of the blue. No one will understand it.’ She finally agreed, and her brother and sister-in-law were in the room when she agreed to it. And now she says she was coerced.”

In the final episode, Ms. Loud told her husband that she wanted a divorce. “By the time she asked Dad for a divorce, she didn’t care if the entire city of Santa Barbara was watching or the whole world,” her daughter, Delilah, said in an interview for this obituary in 2014. “She just wanted Dad out.”

Patricia Claire Russell was born Oct. 4, 1926, in Eugene, Ore., the daughter of an engineer. Her family was close with another family that had a little boy named Bill Loud. They met when she was about 6. Years later, when she was studying history as an undergraduate at Stanford, Mr. Loud would visit her from the University of Oregon.

“He would drive down and pick her up and then go to Tijuana to see bull fights,” Delilah Loud said. “They had quite a courtship.”

Ms. Loud graduated from Stanford in 1948. The Louds eloped to Mexico in March 1950. By the time the cameras showed up, in 1971, Mr. Loud had built a successful business making parts for mining equipment, and the family was living an affluent life.

They had a house with a pool and a Jaguar in the driveway. They took long vacations to Europe.

Ms. Loud was widely read, and she talked with her children about art, music and books. Life was bigger than Santa Barbara, she told them.

“They were adventurous types,” Delilah Loud said, recalling the family conversation about whether to participate in “An American Family.” “They wanted us to experience the world and they thought, ‘Well, what the heck, it’ll be a new experience.’’’

Ms. Loud’s is survived by Delilah and another daughter, Michele, as well as two sons, Kevin and Grant, according to the family’s Facebook post.

Ms. Loud moved to New York with her daughters in 1974 and lived in an apartment on the Upper East Side for more than a decade while working as a literary agent and doing other work.

She lived in Bath, England, in the early 1990s before moving back to California to live with Lance. In 2001, Lance, who had led the rock band the Mumps and was a freelance writer, asked the original camera and sound equipment operators of “An American Family” to document his final days. He did not tell his mother the cameras would show up.

“I don’t know why Lance did that, but he wanted to do it,” she told The Times.

In 2003, public television aired “Lance Loud! A Death in an American Family.”

Lockdown? What Lockdown? Heat Wave Brings Britons Out in Droves