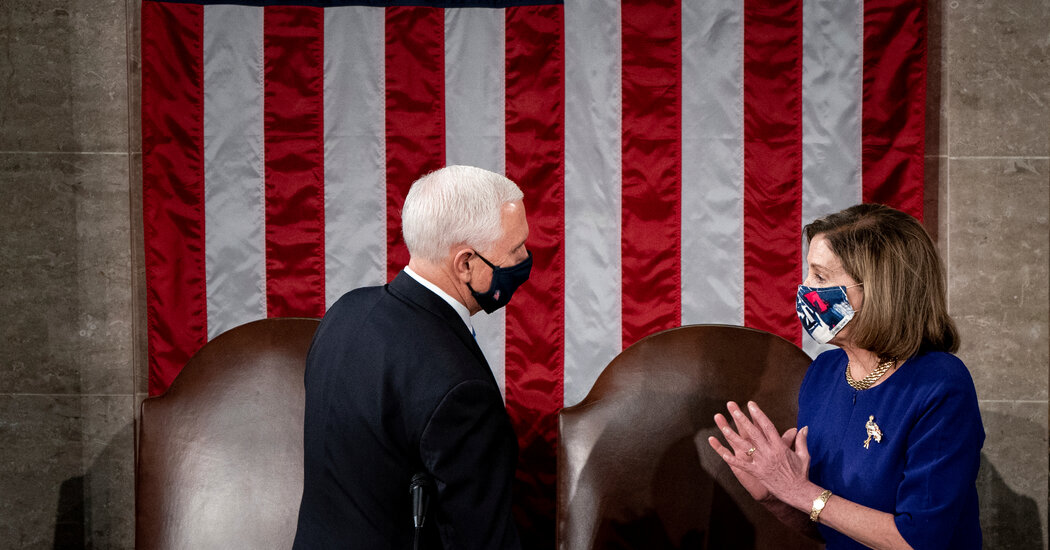 House Democrats on Monday introduced an article of impeachment against President Trump for inciting a mob that attacked the Capitol last week, vowing to press the charge as Republicans blocked their move to formally call on Vice President Mike Pence to strip him of power under the 25th Amendment.

The dual actions came as Speaker Nancy Pelosi and her caucus sought to ratchet up pressure on Mr. Pence to intervene and push Mr. Trump to resign. If they did not, the Democrats vowed immediate consequences for Mr. Trump’s role in an attack that put the lives of the vice president, members of Congress and thousands of staff working on Capitol Hill at risk as they met to formalize President-elect Joseph R. Biden Jr.’s victory.

As expected, Republicans objected to a resolution calling on Mr. Pence to invoke the 25th Amendment, meaning that the House would have to call a full vote on the measure on Tuesday. Democratic leaders were confident it would pass, and pressured Republican lawmakers to vote with them to beseech the vice president, who is said to be opposed to using the powers outlined in the Constitution, to do so.

It was a remarkable threat. If Mr. Pence does not intervene “within 24 hours” and the president does not resign, the House will move as early as Wednesday to consider the impeachment resolution on the floor, just a week after the attack. Already more than 210 Democrats have signed onto the charge, just shy of a majority of the House. Several Republicans were said to be considering voting to impeach for the first time, though party leaders were opposed.

The four-page impeachment article charges Mr. Trump with “inciting violence against the government of the United States” when he sowed bogus claims about election fraud and encouraged his supporters at a rally outside the White House to take extraordinary measures to stop the counting of electoral votes underway at the Capitol. A short time later, rioters mobbed the building, ransacking the seat of American government and killing a Capitol Police officer. (Four others also died as a result of injuries or medical emergencies on Capitol grounds.)

Last minute changes were made late Sunday to include a reference to the 14th Amendment, the post-Civil War era addition to the Constitution that prohibits anyone who “engaged in insurrection or rebellion” against the United States from holding future office. Lawmakers also decided to cite specific language from Mr. Trump’s speech last Wednesday, inciting the crowd, quoting him saying: “If you don’t fight like hell, you’re not going to have a country anymore.”

“In all this, President Trump gravely endangered the security of the United States and its institutions of government,” the article reads. “He threatened the integrity of the democratic system, interfered with the peaceful transition of power, and imperiled a coequal branch of government. He thereby betrayed his trust as president, to the manifest injury of the people of the United States.”

Lawmakers involved in the effort cautioned the language could still change before any House vote.