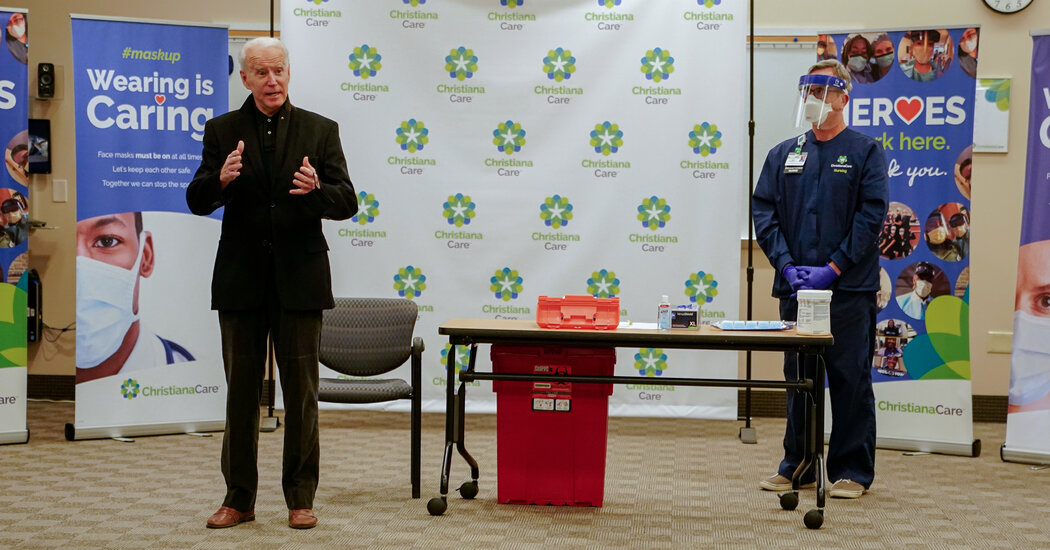 President-elect Joseph R. Biden Jr. said he was exploring ways for Democrats in Congress to advance his agenda while pursuing a second impeachment of President Trump.

Asked about the impeachment proceeding now underway against Mr. Trump in Congress, where House Democrats introduced an article of impeachment today, Mr. Biden noted that his top priority is the passage of a new economic stimulus plan and repairing the U.S. economy.

But Mr. Biden added that he had spoken to House and Senate Democrats about whether it would be possible to “bifurcate” Congressional business, splitting days between impeachment and confirming his nominees and passing his agenda.

“I haven’t gotten an answer from the Parliamentarian yet,” the president-elect said at Christiana Hospital in Newark, Del., where he received a second dose of the Pfizer-BioNTech coronavirus vaccine.

Senate Majority Leader Mitch McConnell has said that his chamber could not take up Mr. Trump’s impeachment before the president leaves office on January 20. There appears to be nothing in the Constitution prohibiting the impeachment of a president after he leaves office, however. And even though it will be too late to remove Mr. Trump from power, the Senate — which after Inauguration Day will be controlled by Democrats — can still vote to prevent him from serving another term.

But some Democrats are concerned that another impeachment fight will be bitter and time-consuming, complicating Mr. Biden’s efforts to quickly confirm his cabinet and pass a new economic stimulus measure, among other initiatives.

Earlier, Mr. Biden announced that he will nominate William Burns, a former senior State Department official, to run the Central Intelligence Agency. His transition office also named more than 20 lawyers to the staff of the White House Counsel’s Office, who will report to incoming counsel, Dana Remus. Several worked on the Biden-Harris campaign or have been assisting the transition.

The Proud Boys, Who Trade in Political Violence, Get a Boost From Trump

A Man, a Pint and a Timer Become Symbols of Ireland’s Pandemic Rules

The Pentagon warns adversaries that domestic terrorist threats won’t distract it from foreign ones.