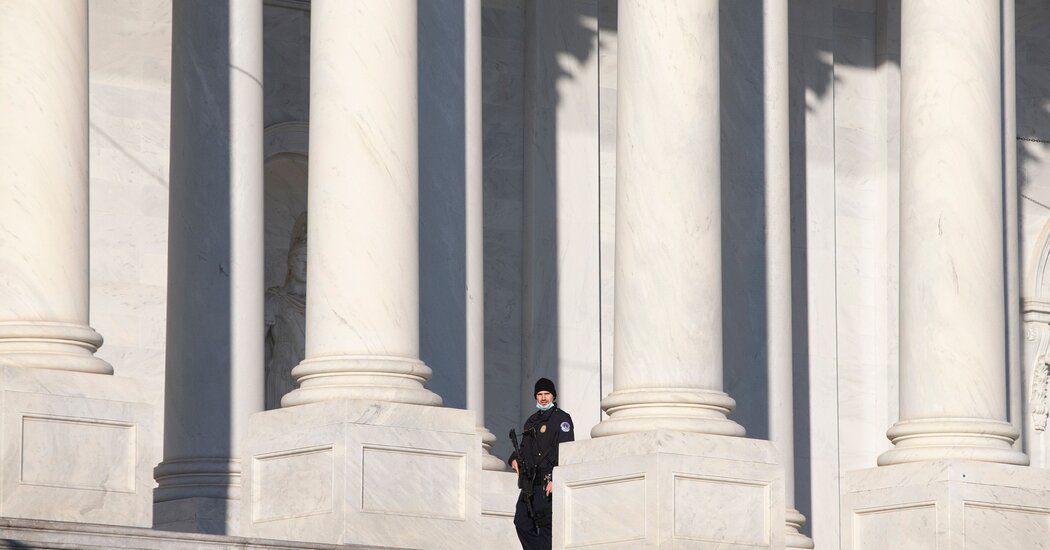 House Democrats were briefed Monday night on a handful of specific active threats to the Capitol and to lawmakers in the aftermath of the mob attack on the Capitol.

The briefing by the acting Capitol Police chief and sergeant-at-arms also discussed security steps that were being put in place, as lawmakers pushed for more details on precautions as they returned to Washington for votes on impeachment and a resolution demanding that Vice President Mike Pence wrest the powers of the presidency from President Trump.

Democrats who were on the call said that the presentations detailed the plans of ad hoc militia groups and discussed how determined they were to try to carry them out. At least one plan involved seeking vengeance for the death of Ashli Babbitt, 35, an Air Force veteran from Southern California, who was shot and killed by a Capitol Police officer outside the House chamber last Wednesday.

Lawmakers were left rattled; several confided afterward that they were fearful of re-entering the Capitol this week. Others were also concerned about flying after some were threatened at the airport. Lawmakers pressed the officials on what precautions were being taken to help lawmakers safely travel to and within Washington.

In a memo that circulated on Monday, lawmakers were reminded that the purchase of a bulletproof vest was a reimbursable expense, as was security training. Democrats raised the prospect of requiring lawmakers to go through a metal detector on Inauguration Day, citing some Republicans who have pushed to be allowed to carry a concealed gun in Washington despite federal and district law. Given the involvement of several Republicans in various “Stop the Steal” rallies, there is deep mistrust among Democrats toward those colleagues.

One Democrat, who asked to remain anonymous out of security concerns, called the call “the most terrifying hour of my entire life.” But another Democrat on the call, who works on national security issues, said afterward that it was reassuring because it showed that the authorities were properly engaging with the threat, unlike the relative silence and assurances given in the run-up to Jan. 6.

In the Senate, Senator Chuck Schumer of New York, the Democratic leader, said in a letter to his caucus that the attack “showed us we need qualified Senate-confirmed people (not in an acting capacity) in key national security positions on Day One, including Secretary of Defense, Secretary of Homeland Security, Secretary of State, Attorney General, and others.”

The Senate was expected to hold a security briefing on Tuesday afternoon.

‘One Day, After Several Months of Not Stopping By, He Poked His Head In’

Are We Looking for the Wrong Coronavirus Vaccines?

Abortion Was Back-Burnered in the Presidential Race. Not Anymore.

‘One Day, After Several Months of Not Stopping By, He Poked...