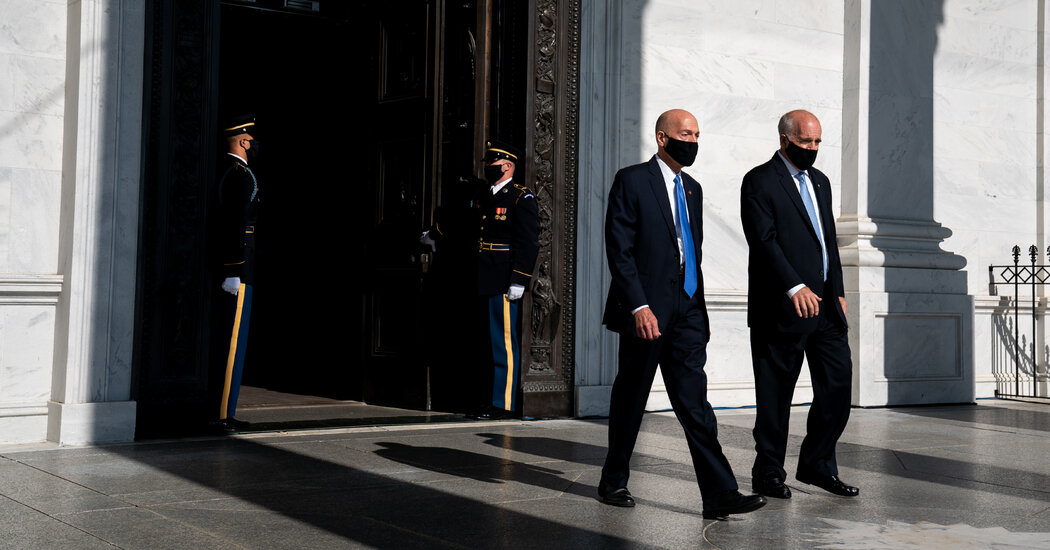 Both men had similar backgrounds, working for years as Secret Service agents but considered more skilled in navigating the agency’s political infighting than as experts in protection. Both went on to land plum assignments: the sergeants-at-arms of the Senate and House.

Now, the two men, Michael C. Stenger and Paul D. Irving, have resigned from those posts and are facing intense scrutiny over the security failure last week that led to the deadly siege of the Capitol, its first occupation since the War of 1812. The former chief of the Capitol Police Steven Sund told The Washington Post that they refused to grant his requests to put the National Guard on standby leading up to Congress’s Electoral College certification, which Trump supporters ultimately disrupted, because they were too concerned about the “optics” of such a move.

The jobs forced both men to balance an array of often-conflicting forces, according to interviews with former colleagues, law enforcement experts and former sergeants-at-arms. Attempts to reach Mr. Stenger and Mr. Irving were unsuccessful.

The sergeant-at-arms posts are unique because they come with the responsibility of overseeing not only security but also protocol and the day-to-day operations of the Capitol, like arranging V.I.P. parking passes or even the printing of posters that lawmaker use as props for speeches.

Both positions derive their power directly from lawmakers. The Senate elects its sergeant-at-arms and the speaker of the House picks that chamber’s. Mr. Stenger, who worked for the Senate, and Mr. Irving, his House counterpart, deftly tried to satisfy the 535 lawmakers who often had competing demands.

The accusations by Mr. Sund, who had reported to both men, ignited criticisms that Mr. Stenger and Mr. Irving had placed politics over the safety of lawmakers, staff members and journalists assembled for the count of the Electoral College vote.

Lawmakers often held significant sway over how decisions about security were made, former law enforcement officials and a former sergeant-at-arms said.

Terrance W. Gainer, who previously served as both the chief of the Capitol Police and the Senate’s sergeant-at-arms, said that based on his experience, Capitol security officials often had to run their plans by members of Congress before major events. He said that given the blowback after the heavy policing of demonstrations against police brutality this summer, lawmakers were likely wary of allowing the Capitol to appear like a fortress.

“It wouldn’t surprise me, having been chief, if there was some reticence on behalf of leadership in the House and Senate not wanting to look like we were overarmed,” Mr. Gainer said.

Some Minnesota Republicans undergo coronavirus tests after a Trump rally.

Films Hit Festivals Trying to Create Buzz Without a Crowd