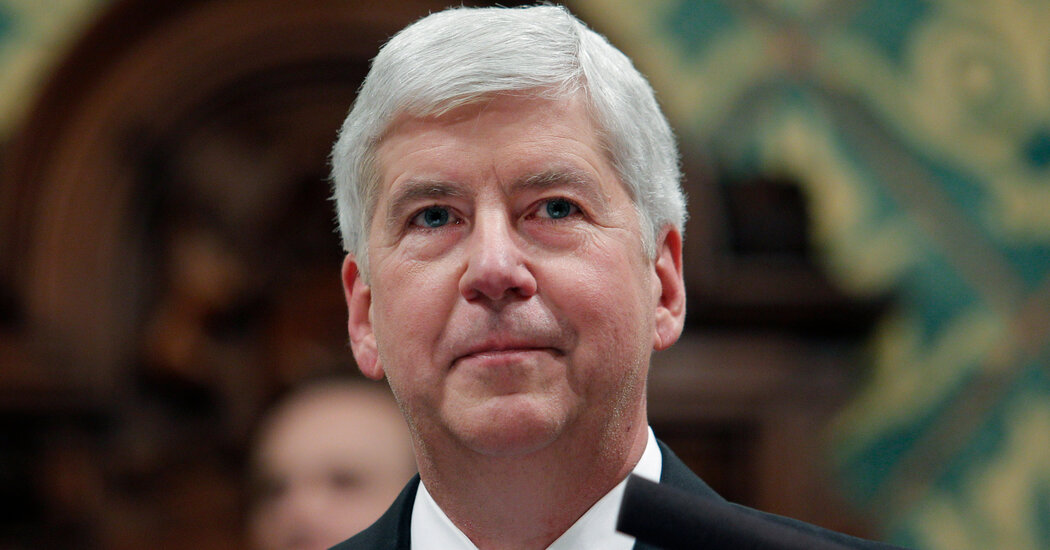 WEST BLOOMFIELD, Mich. — Rick Snyder, the former governor of Michigan, said he bears no criminal responsibility for the Flint water crisis, issuing a statement on Tuesday amid reports that charges connected to the crisis were imminent.

The Associated Press reported that Mr. Snyder, a Republican who has been out of office for two years, would be charged by the state attorney general’s office, along with several others, including his former health director, Nick Lyon.

“It is outrageous to think any criminal charges would be filed against Gov. Snyder,” Brian Lennon, a lawyer for Mr. Snyder, said in an email. “Any charges would be meritless. Coming from an administration that claims to be above partisan politics, it is deeply disappointing to see pure political motivation driving charging decisions.”

Mr. Snyder’s administration was in charge during Flint’s water crisis, which left thousands of the city’s residents sickened, angry and distrustful of the government.

Dana Nessel, the Michigan attorney general, declined to comment. A spokeswoman for Gov. Gretchen Whitmer, a Democrat, did not return phone calls.

The water crisis began in 2014, when officials switched Flint’s water source to the Flint River, a cost-saving measure that was intended to help a city in financial distress. But necessary corrosion controls were not added to the river water, causing lead from Flint’s aging pipes to leach into the drinking supply. Residents protested when water from their taps was brown and foul-smelling — frequently holding up jugs of discolored water in front of Flint’s City Hall — but local and state officials dismissed them.

Months later, doctors in Flint noticed alarmingly high lead levels in the blood of many residents, and at the same time, an outbreak of Legionnaire’s disease sickened at least 87 people in the Flint region, killing nine of them. The outcry in Flint prompted the city to return the water to its previous source, Lake Huron, and begin an effort to replace the dangerous lead pipes — a project that is nearly complete.

Many of Flint’s 100,000 residents say that they have yet to trust the water again.

Charges had previously been filed in connection to the crisis, but in June of 2019, prosecutors stunned Flint by dropping all pending charges.

Fifteen state and local officials, including emergency managers who ran the city and a member of the governor’s cabinet, had been accused by state prosecutors of crimes as serious as involuntary manslaughter. Seven had already taken plea deals. Eight more, including most of the highest-ranking officials, were awaiting trial.

When the Michigan attorney general’s office, which had recently passed from Republican to Democratic hands, abruptly dropped the eight remaining cases, prosecutors left open the possibility of recharging some of those same people, and perhaps others, too. Mr. Snyder had not been charged in the earlier case, though members of his administration were.

Mr. Snyder, a former businessman, ran for the governor’s office a decade ago promising fiscal responsibility and a data-driven approach to the job.

Mr. Snyder left the governor’s office in 2019, prevented by term limits from seeking a third term.

Just last week, Mr. Snyder and Ms. Whitmer, in a rare gesture of bipartisanship, issued a joint statement condemning the violence in Washington.

Man rapes woman he befriended on WhatsApp group `jobs for all` in Delhi`s Shaheen...

Where We Stand on the Pandemic