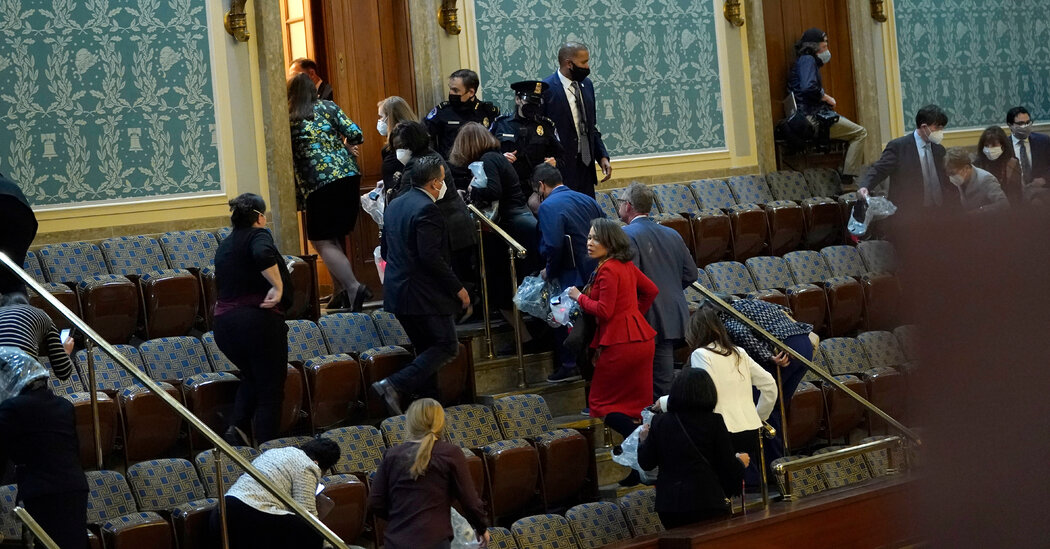 A third lawmaker has tested positive for coronavirus in the days since a mob roamed the halls of Congress and forced lawmakers to jam into cloistered secure rooms where a number of Republicans were not wearing masks.

The announcement came as a grim reality has begun to dawn on Capitol Hill: The riot on Wednesday may have started a coronavirus superspreader event.

All three Democratic lawmakers have pointed at Republican counterparts who refused to wear masks while members of Congress were sheltering in place.

“I am now in strict isolation, worried that I have risked my wife’s health and angry at the selfishness and arrogance of the anti-maskers who put their own contempt and disregard for decency ahead of the health and safety of their colleagues and our staff,” Mr. Schneider said in a statement. “We can no longer tolerate Members coming to the floor or gathering in the halls of Congress without doing the bare minimum to protect those around them.”

After Mr. Schneider’s announcement, two of his Democratic colleagues, Debbie Dingell of Michigan and Anthony Brown of Maryland, introduced legislation that would impose $1,000 fines on members of Congress who refused to wear a mask at the Capitol during the pandemic.

It will be days before the full virus-related impact of the riot will be known, but it likely could have been worse. Because of the pandemic, lawmakers were instructed to remain in their offices unless speaking during the debate over the certification of votes. Tourists had been temporarily barred and the number of reporters allowed in each chamber at a time had been substantially curtailed.

But the normal precautions — already haphazardly enforced — collapsed as pro-Trump supporters stormed the Capitol. Did six feet of distance matter when lawmakers huddled on the ground as a mob tried to break through the door? Or as they tried to rush through tight corridors and into a cramped elevator to a secure space? Or as they sought to comfort a traumatized colleague?

On both sides of the Capitol, lawmakers, aides, police officers and reporters who had fled to secure locations have been warned that they might have been exposed to the coronavirus while hiding from the mob. Some people who had taken refuge in a room that included senators have been warned of possible exposure, while Dr. Brian P. Monahan, the attending physician of Congress, wrote to House lawmakers telling them to obtain a P.C.R. test as a precaution and to continue taking preventive steps against the spread of the virus.

In a letter referring to a crowded House safe room, Dr. Monahan said that “the time in this room was several hours for some and briefer for others,” warning that “individuals may have been exposed to another occupant with coronavirus infection” during that period.

That person has not been identified, but on Monday, Ms. Coleman became the first lawmaker to announce that she had tested positive. She directly pointed at a handful of Republicans who had refused to wear masks in the room despite entreaties from Democrats to do so.

Hours later, Ms. Jayapal said that she had also tested positive, also suggesting unmasked Republican lawmakers were in part to blame. Ms. Jayapal said she had been self-isolating since last week’s riot as a precaution.

Stephenie Meyer Is Telling Edward’s Story, Even if It Makes Her Anxious

‘Red Zone’ List Has Grown to 21 States, According to Report: Live Updates