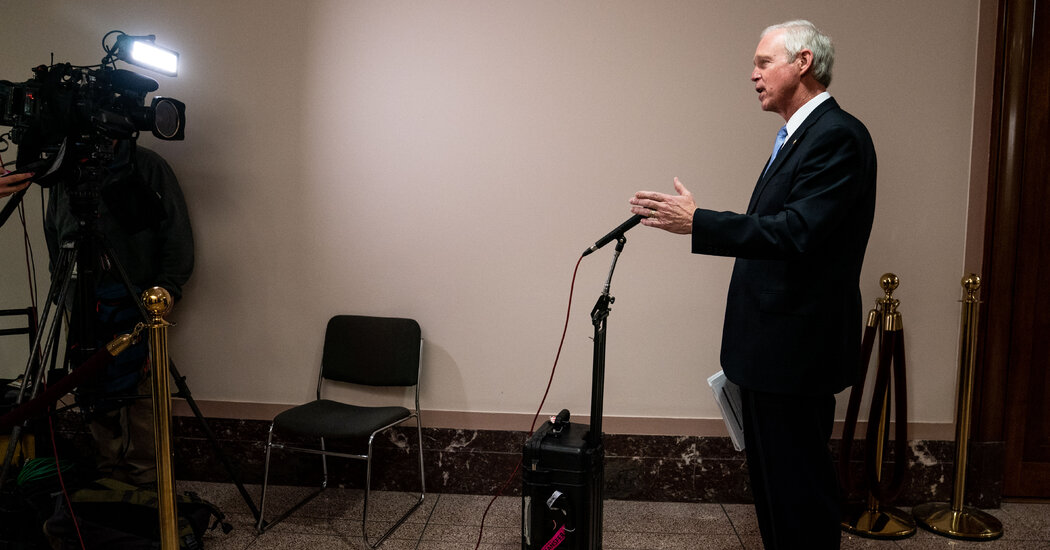 The first television advertisements of the 2022 campaign cycle are on the air in Wisconsin, targeting a Republican senator and connecting him to last week’s violent riot at the U.S. Capitol.

The Democratic Party of Wisconsin on Wednesday morning began a week’s worth of ads criticizing Senator Ron Johnson for his role in fomenting doubts about President-elect Joseph R. Biden Jr.’s victory in the presidential election and linking him to the siege at the Capitol.

With gruesome images of a Capitol Police officer being crushed by rioters supporting President Trump, the ad’s narrator cites an editorial published last week in The Milwaukee Journal Sentinel that called Mr. Johnson “a leading member of the Senate’s Sedition Caucus” and called for his resignation.

The state party is spending more than $100,000 to air the ad in five Wisconsin TV markets and Washington, D.C., according to Ben Wikler, the Wisconsin Democratic chairman. It plans to keep the spot on television through Mr. Biden’s inauguration next week.

Mr. Johnson, the Republican chairman of the Senate’s homeland security committee, did not vote to overturn the results of the presidential election last week. But in the wake of the election, he and his committee amplified false claims of voter fraud that were repeatedly rejected by courts across the United States.

Mr. Johnson, first elected in 2010, has not confirmed that he will seek a third term in 2022. He initially said he would retire after two terms, but in the final days before the Nov. 3 election told The New York Times that “things have changed.”

“Ron Johnson shouldn’t wait 21 months to lose an election, he should resign now,” Mr. Wikler said. “Wisconsinites should never forget the image of marauding violent mob smashing its way into the United States Capitol to overturn the results of the election. That moment will be a stain on Ron Johnson’s career for the rest of his life.”

At least three Wisconsin Democrats are actively planning to run in a primary to face Mr. Johnson in 2022. Thomas Nelson, the Outagamie County executive, launched his campaign in October. Sarah Godlewski, the state treasurer, and Alex Lasry, the Milwaukee Bucks executive, are also putting together campaign infrastructures but have not yet announced their bids.

The Particular Pain of Pandemic Grief