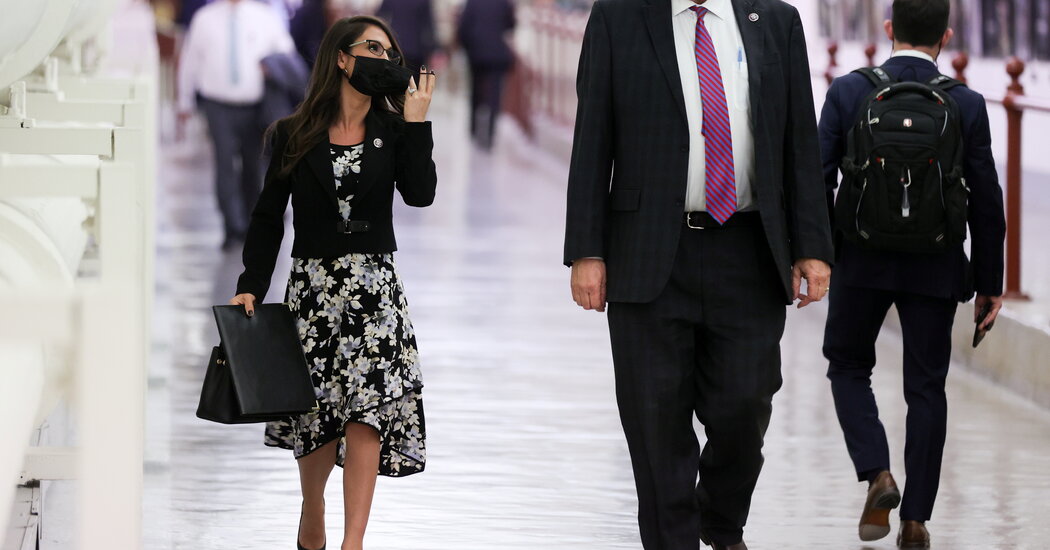 “I was one of the gun-owning Americans who heard you speak regarding your ‘Hell yes, I’m going to take your AR-15s and AK-47s,’” Ms. Boebert said to Mr. O’Rourke at the time. “Well, I’m here to say hell no, you’re not.’”

She has expressed support for the QAnon conspiracy group, though she has tried to temper that by saying she is not a follower.

Ms. Boebert was running a restaurant in Colorado’s ranch country — where she encouraged the servers to openly carry guns — when she stunned the state’s Republican establishment by defeating a five-term incumbent in the primary and then winning the general election.

“She was so inexperienced,” said Dick Wadhams, the former head of the Colorado Republican Party. “I don’t think she even knew she had no chance, which turned out to be a good thing for her. She caught everyone by surprise.”

So far, she has had the same effect on Washington. On Wednesday, the Capitol Police and Ms. Boebert’s office declined to respond to requests about whether she had actually been carrying a gun either time she had trouble getting into the chamber. Ms. Boebert has said that she has a concealed carry permit, issued through the District of Columbia, for her gun and has claimed on Twitter that she has the right to freely carry within the Capitol complex, which is not true.

On Wednesday, a spokeswoman for the District of Columbia Metropolitan Police Department did not respond when asked if Washington’s police chief, Robert J. Contee III, had met with Ms. Boebert to explain the district’s gun laws to her, as he had said he would do last week.

In Colorado, Ms. Boebert’s district covers much of western Colorado, a sprawling, politically diverse landscape of mesas and jagged mountains that includes liberal enclaves like Aspen and Telluride as well as often overlooked towns where cattle ranching, mining and natural gas drilling pay the bills. For generations, the district elected deeply rooted local men who, whether Democrat or Republican, tended to be cowboy-boot-wearing moderates focused on the local economy and natural resources.

Are Unemployed Americans About to Fall Off a Cliff?