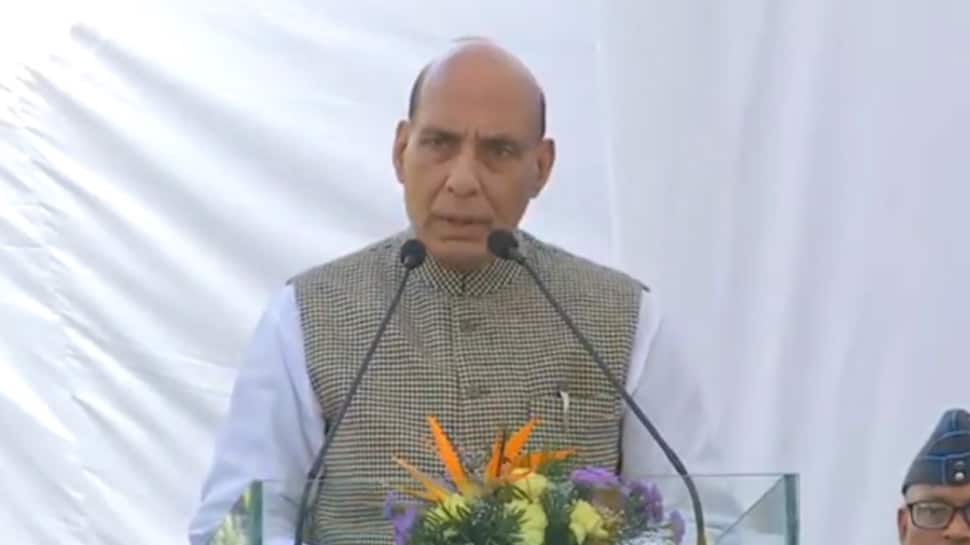 Union Defence Minister Rajnath Singh on Thursday stated that India doesn’t want a war but if anyone wants to hurt the self-esteem of the nation then our soldiers will giving a befitting reply. Speaking on Armed Forces Veterans Day in Bengaluru, Rajnath Singh said, “We don’t want war, but if anyone wants to hurt our self-esteem, then our soldiers are capable of giving a befitting reply.”

He also said that India does not want conflict with anyone but wants peace and friendly ties since “it’s in our blood and culture”. “During the standoff between India and China, our soldiers displayed exemplary bravery and patience and if that can be narrated then every Indian will feel proud,” added Rajnath Singh.

Addressing the Ex-Servicemen on ‘Veterans Day’ in Bengaluru. Watch https://t.co/huJtPcaCUR

On the 1971 war, he asserted, “Our jawans were enjoying the heat of gunpowder–this was the 1971 battle. The flag of India was raised in just 15 days in 1971. Going to Pakistan’s soil and trying to end terrorism–is a matter of national pride.”

Speaking on the LCA Tejas aircraft, he said, “The identity of India was of importing country. With the formation of the government, Prime Minister Narendra Modi decided that the identity of India should be that of an exporting country. We have placed an order for 83 indigenous LCA Tejas aircraft to HAL. These will be made in India. It will employ about 500 MSMEs and small companies. This will provide employment to more than 50,000 people.”

In a major decision aimed at boosting the domestic aerospace industry, India on January 13 (Wednesday) approved a much-awaited deal worth Rs 48,000 crore to procure 83 indigenously-developed Light Combat Aircraft (LCA) Tejas for the Indian Air Force. The decision to procure the fleet was taken at a meeting of the Cabinet Committee on Security (CCS) chaired by Prime Minister Narendra Modi, Singh had said.

“The CCS chaired by PM Narendra Modi today approved the largest indigenous defence procurement deal worth about (Rs) 48,000 crores to strengthen IAF’s fleet of homegrown fighter jet ‘LCA-Tejas’. This deal will be a game-changer for self-reliance in the Indian defence manufacturing,” Singh had tweeted.

Calling the approval to the proposal by the CCS as a historic decision, the defence minister said Tejas jets are going to be the backbone of the fighter fleet of the Indian Air Force (IAF) in years to come. Around three years back, the Indian Air Force had issued an initial tender for procurement of 83 Tejas aircraft, a four-and-half generation combat jet which is manufactured by the state-run aerospace behemoth Hindustan Aeronautics Limited (HAL).

The IAF has already inducted a batch of Tejas aircraft as part of its initial order of 40 jets. In a statement, the defence ministry said the government approved procurement of 73 LCA Tejas of Mk-1A variant and 10 LCA Tejas Mk-1 trainer aircraft at the cost of Rs 45,696 crore along with design and development of infrastructure worth Rs 1,202 crore.

The Tejas Mk-1A will be equipped with active electronically scanned array radar, beyond visual range missile, electronic warfare suite and air-to-air refuelling and would be a potent platform to meet the operational requirements of the IAF, officials said. The ministry said the government has also approved infrastructure development by IAF under the project to enable it to handle repairs and servicing at its base depots so that the turnaround time of the aircraft could be reduced and their availability can be increased for “operational exploitation”.

“LCA-Tejas incorporates a large number of new technologies many of which were never attempted in India. The indigenous content of LCA-Tejas is 50 per cent in Mk1A variant which will be enhanced to 60 per cent,” Singh said. The defence minister said that aircraft maker HAL has already set up second-line manufacturing facilities at its Nasik and Bengaluru divisions, adding it will ensure timely deliveries of the jets to the IAF.

HAL has already doubled the production capacity of Tejas from eight aircraft per year to 16. Officials said a contract between the IAF and HAL is likely to be signed by March on the mega-deal and actual delivery of the aircraft are expected from 2024. Singh said the Tejas programme would act as a catalyst for transforming the Indian aerospace manufacturing ecosystem into a vibrant, self-sustaining one. “I thank Prime Minister Narendra Modi for this historic decision taken by the CCS today, ” the defence minister said.

The defence ministry said combat aircraft has an indigenous content of 50 per cent which will progressively reach 60 per cent by the end of the programme. It said the manufacturing of Tejas by HAL will give a further push to Atmanirbhar Bharat (self-reliant India) initiative and boost indigenisation of defence production and the defence industry in the country.

“About 500 Indian companies including MSMEs in the design and manufacturing sectors will be working with HAL in this procurement. The programme would act as a catalyst for transforming the Indian aerospace manufacturing ecosystem into a vibrant Atmanirbhar-self-sustaining ecosystem,” it said.

The government has been majorly focusing on boosting domestic defence production and set a target of Rs 1.75 lakh crore (USD 25 billion) turnover in defence manufacturing by 2025. According to estimates, the Indian armed forces are projected to spend around USD 130 billion in capital procurement in the next five years.

In May, Finance Minister Nirmala Sitharaman rolled out a number of reform measures for the defence sector including making separate budgetary outlay to procure Indian-made military hardware, increasing FDI limit from 49 per cent to 74 per cent under the automatic route and generating a year-wise negative list of weapons which won’t be imported.

Trump Continues Criticism of Movement to Defund the Police

A President in the Hospital and a Nation in the Dark

The Pandemic Is Straining Airbnb